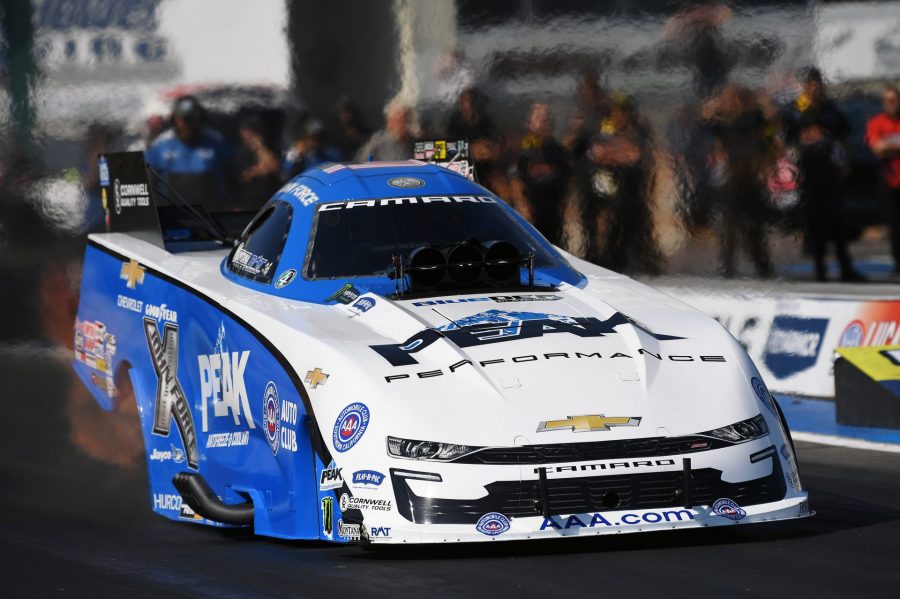 INDIANAPOLIS (Sept. 02, 2021) – John Force and the PEAK Antifreeze and Coolant Chevrolet Camaro SS team are currently fourth in the NHRA Camping World Funny Car points standings. Don’t let the position fool you, the 16-time champion is only 16 points out of the lead and only nine races away from a possible 17th championship. This weekend’s Dodge//SRT U.S. Nationals marks the final event of the regular season and rewards points and a half, allowing more than enough opportunity for the legend to claim the regular season championship and enter the Countdown to the Championship, NHRA’s seven race playoffs, with a 30-point lead over No. 2.

Force and his Daniel Hood and Tim Fabrisi led PEAK Antifreeze team put their name in as championship contenders early in the 2021 season. Force now has 154 career wins after claiming four victories (Charlotte Four-Wide, New England Nationals and the event in Topeka at Heartland Motorsports Park where he shared the winners circle with daughter Brittany Force for the first time), 161 No. 1 qualifying positions (he earned the top spot with Brittany at the Charlotte Four-Wide event) and is trying to win as many as four races in a season for the 14th time in his career.

“This is Indy, and you really want to put your head in the car. I’ve been here for a week going over things that I might have done in the cockpit that was wrong and we corrected those things,” said Force who had a rare first round exit at Brainerd International Raceway that prompted a test session on Monday following the event. “Testing went well after Brainerd, we figured things out. Heck we ran in the 3.80s every run.”

The solid day of testing and time spent with the team this week has Force, who won the U.S. Nationals in 2019 when he last competed at the event, confident in their chances this weekend. The Funny Car great also has a bit of history on his side. Force is currently tied for most Funny Car wins at the U.S. Nationals with Ed McCulloch at five, which is seventh overall at Indy behind Tony Schumacher (10), Bob Glidden (9), Don Garlits (8) and Greg Anderson, Warren Johnson and David Schultz (6 each). Force has qualified No. 1 at Indy 11 times, more than at any other event in the series although he hasn’t done so since 2006.  He was the No. 3 qualifier in his last appearance.

“You want to win Indy. You have to put business aside and really focus going into the race. I’m really excited about it, this PEAK team, we’re really excited. My guys, they’ve been working hard,” Force said. “I’ve said it to the fans ‘This is Indy, come here. We want to entertain you.’ That’s our job. We need you to fill those stands, to motivate us.”