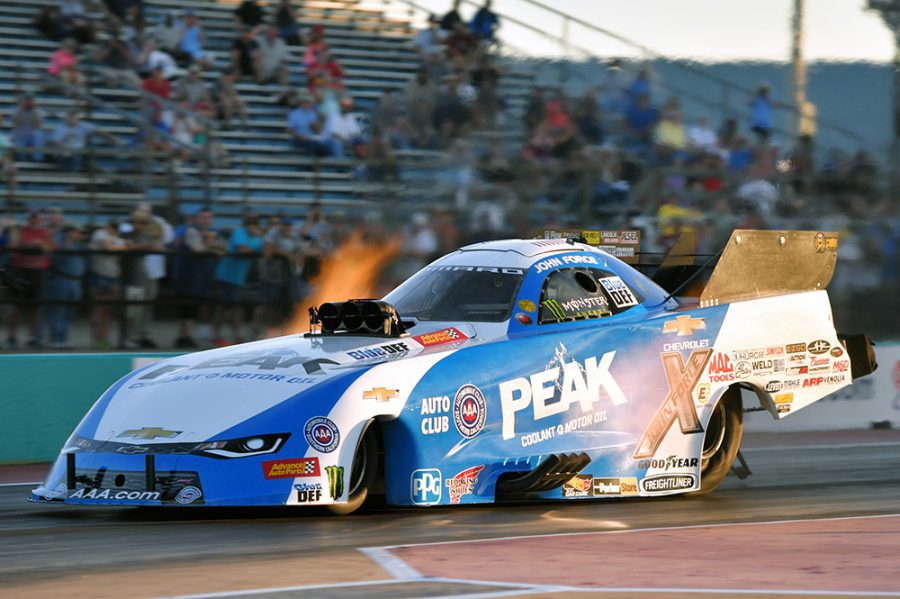 CONCORD, N.C. (Oct. 10, 2018) — Halfway through the Countdown to the Mello Yello Championship, on the eve of the 11th annual NHRA Carolina Nationals at zMAX Dragway, John Force is currently ninth in the Mello Yello standings, 219 points behind pacesetting teammate and protégé Robert Hight. And while contending for the Funny Car title he has won a record 16 times in his 42-year career is, to some, a bit of a longshot, don’t try to tell him that he’s just out there going through the motions.

“I never give up,” said the Hall of Fame owner/driver following last week’s second round exit at the AAA Texas Fall Nationals in Dallas. “You never know what’s going to happen in drag racing. I’ve had it go for me and I’ve had it go against me but, at the end of the day, I still believe in the magic.”

Consequently, he believes he still can rally in the final three races and write another chapter to motor racing’s most compelling biography.

“I still gotta shot,” he said, “but we’ve gotta go rounds. I thought I had moved up more in the points but I guess there are a bunch of us grouped together. We’ve gotta break outta that pack and, so far, we haven’t done it because we’ve been stuck in the second round.”

Nevertheless, even though he isn’t yet part of the championship math, Force definitely is part of the championship conversation after first round victories over former series champs Matt Hagan, Jack Beckman and Ron Capps in successive events. The result is that, come Sunday, no one in contention for the $500,000 champion’s bonus wants to look over first round and see the blue PEAK Camaro in the other lane.

“I live for winning,” Force said. “I’m up against all these young guns, but so far I’m holding my own. We’ve got a pretty good hot rod right now. It’s not the quickest but it’ll go down through there and, early in the year, we couldn’t do that.”

Despite early car control problems, equipment failures and crashes that penalized the former truck driver physically, statistically and financially, he rallied in July to win the Dodge Mile-High Nationals at Denver, Colo., and extend to 31 the number of seasons in which he has won at least one tour event.

Of course, every time he shows up, Force sets a record of some sort or is at least in a position to do so. At zMAX, a track on which he won the inaugural 4-Wide Nationals in 2010, on which he won the Carolina Nationals just two years ago and at which there is a spectator grandstand bearing his name, the former Driver of the Year for all American motorsports (1996) again will be trying to win his 150th NHRA tour event.