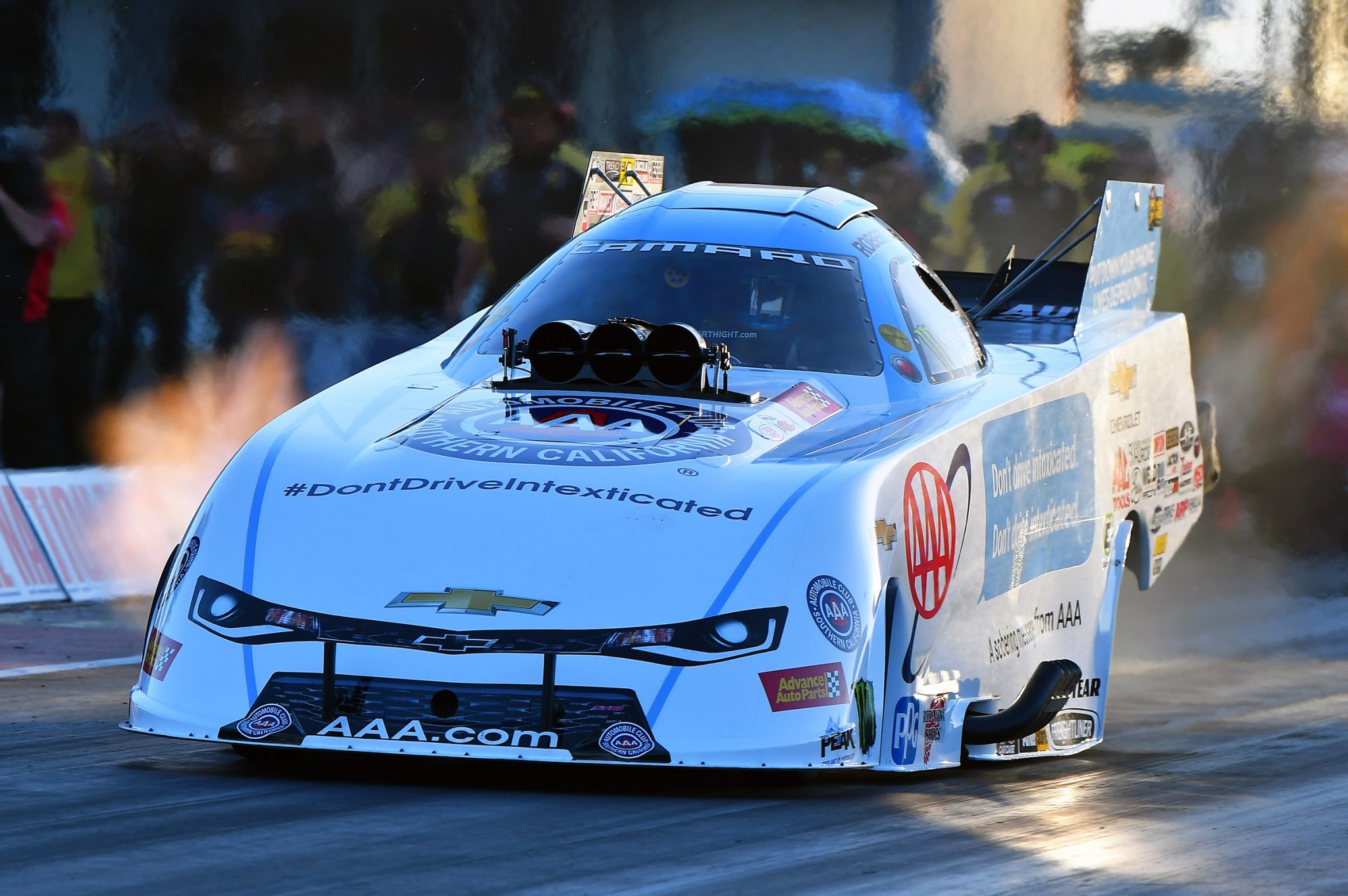 CONCORD, N.C. (October 10, 2018) — Two weeks ago Robert Hight could only hope that his championship aspirations had not been dashed by a finish line explosion on the way to victory in St Louis that left him with a broken left collarbone. Last Friday, hope turned to determination and grit when Hight and the AAA Texas Chevrolet Camaro blasted down the Texas Motorplex in the first round of qualifying without any issue.

“On Friday, after I had made two qualifying runs, I felt as good as I did on Thursday,” Hight said. “There was no extra pain or soreness. There is no way I could have raced without the surgery, some rest and the redesigned safety equipment from Simpson. I had to go over and thank Greg Anderson, the Pro Stock racer from Mooresville (NC), since he actually had a similar chest protector designed after he had heart surgery few years ago.”

A surgery on Wednesday, September 26, inserted a titanium plate to repair a completely fractured left collarbone. Nine days later, with a modified carbon fiber chest protector, Hight was back in the seat and on the way to his second consecutive victory in the Countdown to the Championship and a Mello Yello points lead extension.

“That final round in Texas was huge. It was a 40-point swing,” said Hight. “If I would have lost I would have only had a 10-point lead. We got the win in the AAA Texas Camaro and now we have 50 points on second place. That isn’t a huge lead but it sure is better. We will have to keep our focus. I said before the Countdown started I thought we needed to win at least three races and never go out in the first round if we wanted a shot at a third championship. We are doing okay right now.”

Hight won for the fourth time in 2018 and repeated history which he hopes will continue this weekend at the NHRA Carolina Nationals. In Hight’s previous two successful Mello Yello Funny Car championship campaigns the crewman turned driver has won at both the Texas Motorplex and zMAX Dragway on the way to the $500,000 championship check.

The two-time Funny Car World Champion has three wins at the fall NHRA race outside of Charlotte, also picking up a win in 2013. He was the most Countdown Funny Car wins of any competitor with eleven.

“I love racing in Charlotte. Bruton and Marcus Smith built an amazing race track,” added Hight. “I have won there quite a few times in the Four-Wide and in the Countdown. There is a lot to do around the race track with restaurants and shopping but our focus will be on winning that race. I would love to get three wins in a row in the Countdown and get our fourth win at the Carolina Nationals.”

Throughout the Countdown the Auto Club Camaro has been quick in qualifying and strong on race day. The crew chief combination of Jimmy Prock and Chris Cunningham has given Hight a competitive race car from Friday-Sunday. Last weekend, at the Motorplex, Hight picked up qualifying bonus points in both sessions on Saturday, in St Louis he had the quickest Funny Car of qualifying in three of the four sessions and in Reading, the first race of the Countdown, Hight picked up bonus points on Friday and had the quickest race car by far on Sunday.

“I have so much confidence in Jimmy, Chris and this Auto Club team,” said Hight. “The Camaro we started the Countdown with was awesome but it got destroyed in St. Louis. These guys went back to the shop and built a brand new race car for Dallas. We had some minor gremlins, which is part of the deal with a new car, but by Sunday we were dialed-in and won the race. I am excited to get back on the track.”

Qualifying for the NHRA Carolina Nationals at zMAX Dragway begins Friday with sessions at 3:30 and 6 p.m. and continues Saturday at 1:30 and 4 p.m. Eliminations will begin Sunday at 11 a.m.