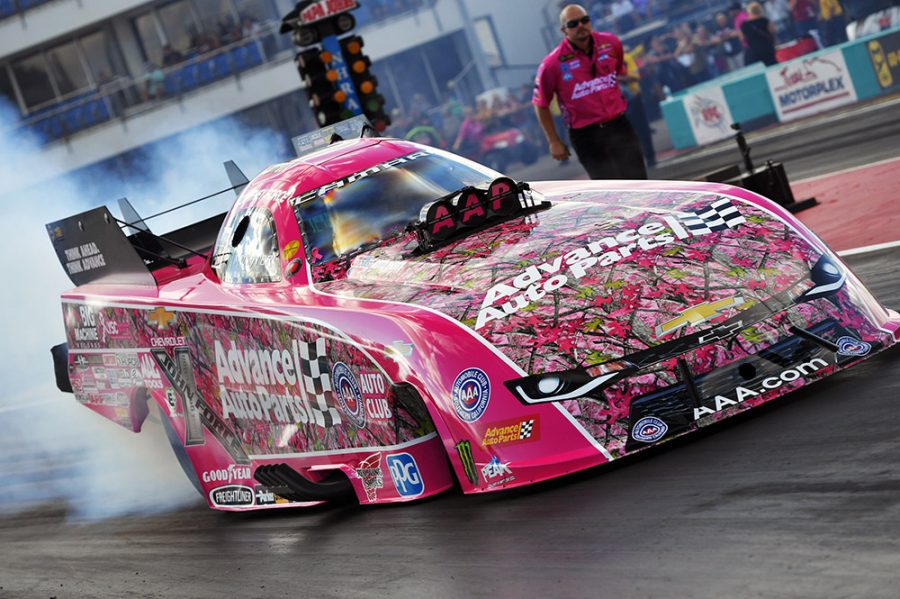 CONCORD, N.C. (Oct. 10, 2018) — Courtney Force and her Advance Auto Parts team head to the NHRA Carolina Nationals ready to move forward. After a bout with a mechanical gremlin through the first three races of the Countdown, the Chevy Camaro, dressed in pink and TrueTimber camo for Breast Cancer Awareness month, showed its potential last Sunday at the FallNationals.

Force’s first round 3.985-second pass was one step closer to what the team had been looking for through three weekends.

“We came into the Countdown number one. We just have to find our stride over the next three races. We have to track down these gremlins,” co-crew chief Brian Corradi explained. “We can’t keep scuffing pistons. We would have won that race if we wouldn’t have scuffed a piston. We know what the problem is and we are going to get it fixed. I am glad we will be racing this weekend.”

Force couldn’t be more on the same page as her tuner. The confidence is backed by performance, the Advance Auto Parts team led the points standings for 12 races off the efforts of four victories and 11 No. 1 qualifiers. With what they have learned from the race in Dallas, they are still a frontrunner for the championship crown.

“I don’t believe our championship chances are over by any means. I actually feel pretty good our Advance Auto Parts TrueTimber Camaro was able to get down the track in the heat,” Force said. “We made our best run last Sunday when it mattered the most. It was one of the quickest runs of the first round unfortunately we were matched up against someone that ran a little better. We had to battle some issues in qualifying and we didn’t qualify where we wanted to. We are going into Charlotte looking to turn our luck around. We still have a shot at this championship we just have to keep our focus.”

Last season, Force battled her way to the finals at the Carolina Nationals, losing out to teammate and eventual world champion Robert Hight. She was the No. 1 qualifier of the event and had to defeat Bob Gilbertson, her father, 16-time world champion John Force and now retired Alexis DeJoria before reaching Hight. The finish was the best of her career at the prestigious zMAX Dragway, and something of a turnaround after previously having only a semifinal and two second round finishes to boast of.

Only 155 points out of first, Force and her Advance Auto Parts team head to the NHRA Carolina Nationals fifth in points with plenty of momentum, confidence and racing left to go after their first NHRA Funny Car World Championship and a win at zMAX Dragway could very well send them on their way.

“I am really proud of this Advance Auto Parts team. They have been working incredibly hard. No one is hanging their heads over here. We had a great regular season and I think we can definitely finish strong over the next three races,” Force said.