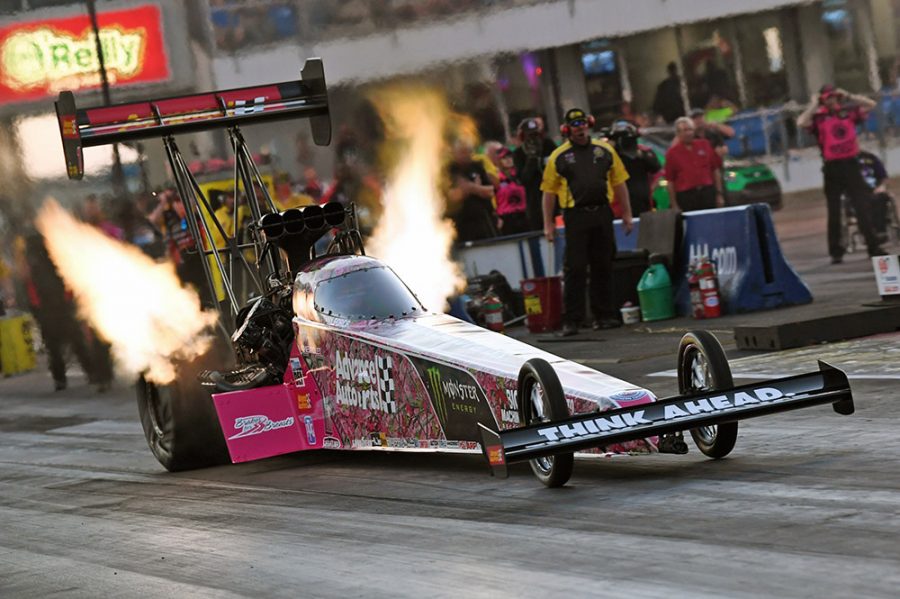 CONCORD, N.C. (October 10, 2018) — Reigning world champion Brittany Force isn’t hanging her head after a less than perfect season so far. The performance of her dragster, her team and herself still matters to the eight-time event winner with just three races left in the 2018 season. After improved performance at the FallNationals, Force is focused on finishing the season strong starting with the NHRA Carolina Nationals at zMAX Dragway.

“Overall we had big improvements for our Advance Auto Parts team. Even after front halving the car and making a lot of changes over the last couple of weeks we are still trying to figure this car out,” said Force. “I think we will be looking good in Charlotte. We will have cooler conditions and I have a lot of confidence in us.”

After making major changes to her pink TrueTimber camo-ed Advance Auto Parts Monster Energy dragster that included front halving the car over the off weekend between St. Louis and Dallas, Force and her team had three solid qualifying passes and picked up a first-round win before overpowering the track in the quarterfinals of the FallNationals.

The team is making strides at the end of a season that has had both highs and lows for the young champion. She began 2018 with a major crash and hospital stay to come back with a brand-new dragster and win the SpringNationals in Houston. However, her Wally in Houston is her lone win of the season.

“People have asked me if I am frustrated and my answer is no because we are all one team. I know the work that these Advance Auto Parts crew guys and my crew chiefs are putting into this race car. It just isn’t turning out the way we want it to right now. With the right attitude and hard work we can turn our performance around,” explained Force of her unwavering confidence in her team. “There are three races left so we have three chances to get wins. That is our goal pick up more wins before the end of the season.”

Force has performed well at zMAX Dragway, picking up the No. 1 qualifier at the track earlier this season for the 4-Wide event and a win at the 4-Wide in 2016. The success has not historically carried over to the fall event, however, with the added confidence based on performance last weekend, Force is betting her season will be ending on a high note.

“We have won in Charlotte during the spring. This is a Countdown race though so obviously it is a big deal. We want to go after that win,” Force said. “We aren’t out of the game and we want to move up in the points. There is a lot of opportunity for improvement. We have a long way to go but we will fight it out.”