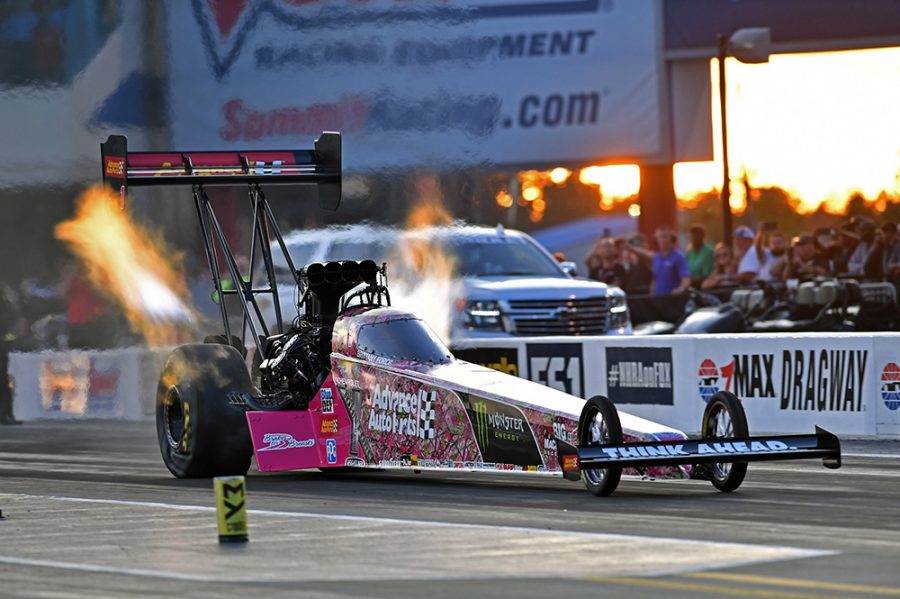 After front-halving their TrueTimber pink camo schemed dragster during the off weekend, Force and her team had seen consistent improvements with performance. That improvement continued right off the trailer Friday when they ran 3.841-seconds at 317.19 mph on a clean run down the track. In the second session, the eight-time event winner had an impressive 3.724-second pass at 328.14 mph that earned her a bonus point and the current No. 3 position.

“Overall a great start to our weekend. Friday qualifying two good passes down the race track. That 3.72 on the second run put us No. 3 and we earned a bonus point. I feel good going into tomorrow. This was a really good first day of qualifying,” Force said. “We were good on-track and it was great to spend time with the fans in the pits. The fans love this Sassy B pink True Timber Advance Auto Parts dragster. It is a beautiful race car and I am proud to be running and representing Brakes for Breasts and Breast Cancer Awareness Month. We are looking to make two more good runs tomorrow and really put ourselves in position to win this race on Sunday. We are looking for a long weekend and we are ready to get this Advance Auto Parts Monster Energy team back into that winner’s circle.”

Coming off back-to-back wins, Robert Hight and the Auto Club of Southern California Chevy Camaro continued to be consistent through Friday’s two qualifying sessions. In the first session, Hight earned two bonus qualifying points with his 3.918-second pass at 327.66 mph that originally had him second. While he was bumped down to the No. 7 position in the second session, Hight improved to a 3.911 at a top speed of 330.31 mph.

“It is hard to be upset with a 3.91 and we ran 3.91 twice today. (Crew chief) Jimmy (Prock) said we just didn’t do enough in Q2. The track was better and we made some changes but we just kept up with the race track basically and we needed more. Still top speed at 330 mph and that shows it has a lot of potential and power. We just have to pick it up early,” Hight explained. “I am not at all bummed when it goes down the track like that. We could have gone up there and swung for the fences and smoked the tires. That would not have helped us any. We went down the race track twice and we have something to tune off of. Conditions are going to be great tomorrow. We have to run some 3.80s and nobody knows how to do that better than Jimmy Prock. Tomorrow we gain points, I promise you.”

John Force began the chase for his second NHRA Carolina Nationals title with two solid runs on Friday in his Republic Services PEAK Coolant and Motor Oil Chevrolet Camaro. In the opening session Force blasted down the all-concrete race track with at 3.978 seconds and 327.19 mph pass which stood as the second quickest run of the session before finally settling the 149-time Funny Car winner in the provisional No. 6 spot.

“I was happy we went out there and put up a good number,” said Force. “(Crew chiefs) Jon (Schaffer) and Ronnie (Thompson) were able to tune from that and we made another good run. We are running Republic Services on this Chevy for PEAK so we had some of their people out today. They are a lot of fun. I love racing here in Charlotte and I feel good we can run even quicker tomorrow.”

Also, during the first session, Force was receiving a healthy amount of support from a NASCAR superstar on the starting line.

“We had Clint Bowyer and his family out at the races today. We have done some sponsor appearances together in the past. It was great to show off for him and his family. This is NASCAR country for sure and we just want to entertain the fans,” added Force.

In the second session, Force stepped up to a 3.932 second run at 329.26 mph with improved conditions. The run sets up Force as the provisional No. 8 qualifier at the end of the day and gives the championship contender some added motivation going into Saturday.

“We are not out of this championship,” Force said. “We need to make some quick runs tomorrow in this hot rod. If we get some round wins on Sunday we could be right back in this championship. Robert and Courtney will be tough to catch but my race car is coming around. I like my chances to improves tomorrow.”

Still battling a mechanical issue in her Advance Auto Parts Chevy Camaro Funny Car, Courtney Force raced to 3.977 seconds at 288.15 mph after shutting off early during the first qualifying session, good enough for the No. 7 spot. Despite some issues, Force improved in the second session to 3.945-seconds at 308.50 mph but was moved down to ninth.

“We made two great passes down the track unfortunately right at the top end our race car keeps shutting off. We have to get this problem fixed before tomorrow. We are going to tear this thing apart tonight to figure out what the gremlin is,” Force explained. “Those two runs got us qualified No. 9 but we are definitely looking to improve tomorrow. We should have really good conditions and we will be looking to lay down two great runs. We are looking for improvement and some of those qualifying bonus points. I am looking forward to this weekend especially since it will be the last time we are running the True Timber Sassy B pink camo Advance Auto Parts Camaro in support of Breast Cancer Awareness Month and the Young Survival Coalition. I am hoping it is a long weekend and we can get this car in the winner’s circle for them.”

Qualifying at the NHRA Carolina Nationals continues Saturday with sessions at 2:30 and 5 p.m. Eliminations at zMAX Dragway will start Sunday at noon.