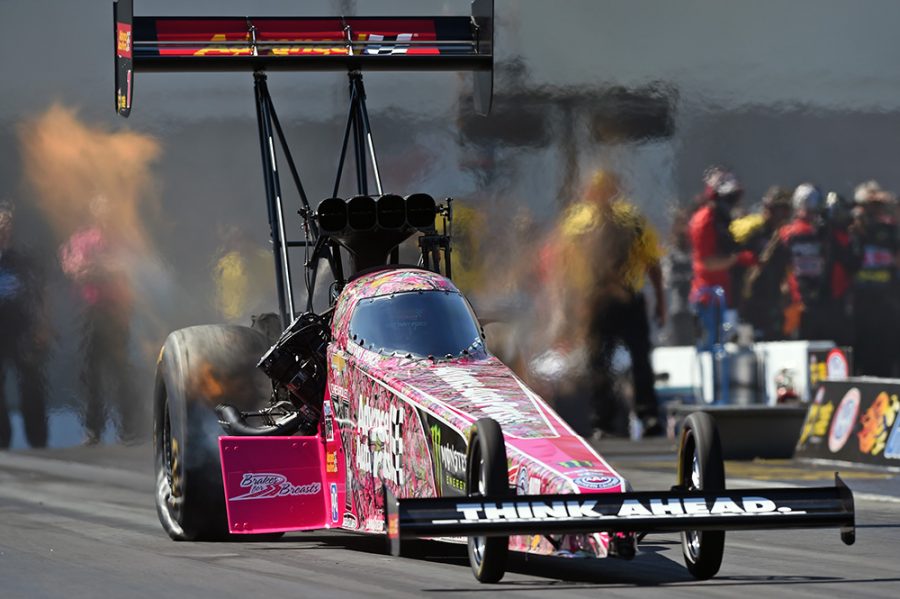 CONCORD, N.C. (Oct. 13, 2018) — Brittany Force and the Advance Auto Parts Monster Energy Top Fuel team rocketed to the No. 1 spot Saturday at the NHRA Carolina Nationals. After four consistent qualifying passes, Force picked up her second No. 1 qualifier of the season 10th of her career off the efforts of her Saturday evening run.

Force started the day with a 3.746-second pass at 329.50 mph that was in line with her performance from Friday and earned her an additional bonus point for being third quickest in the session but not an improvement from her 3.724 that had her starting the day in the No. 3 spot.

It was during the fourth qualifying session that Force and her TrueTimber pink camo decked out Advance Auto Parts team had a stout 3.700 second at 330.72 mph that propelled them to the No. 1 spot ahead of Mello Yello points leaders Steve Torrence and Clay Millican who had previously been dominating qualifying throughout the Countdown to the Championship.

The strong qualifying performance comes after a season that Force admits has been a struggle but after using the off-weekend between St. Louis and Dallas to front-halve the Top Fuel dragster that was also No. 1 at the 4-Wide at zMAX earlier in the season, there’s been a noticeable improvement starting with their efforts in Dallas.

“Our team has really been struggling all year in qualifying and only getting the car down there in one or two runs but we made some changes over the past few weekends and front-halved the car. We took it out last weekend (in Dallas) and got past first round and this weekend I am really hopeful we can turn the corner,” Force said. “We made four consistent runs down the race track and on that last run we went to number one. So this Advance Auto Parts team, we are happy. I really have to thank my crew chiefs Alan Johnson, Brian Husen and all my guys. They have been working around the clock and working so hard. We are looking good going into race day tomorrow and I would like to get us into the winner’s circle.”

Force will start the day racing against Rookie of the Year candidate Audrey Worm. This will be the first head to head meeting between the two drivers.

Mello Yello Funny Car points leader Robert Hight will chase his third consecutive tour victory from the No. 7 spot with his 3.911 second pass at 330.31 mph. Hight and the Auto Club of Southern California team made four solid passes down zMAX Dragway. Early Saturday afternoon, Hight matched his 3.911 pairing it with a slower speed of 329.50 mph. In the final qualifying session, his Chevy Camaro raced to a 3.932 at 317.66.

“We were going for it on that last run. We had run three straight 3.91s and we wanted to step up and try and go low. We missed it a little but I think (crew chiefs) Jimmy (Prock) and Chris (Cunningham) learned a few things,” Hight explained. “The conditions here have been getting better throughout the weekend. I think tomorrow if it is overcast you could see even quicker runs. We want to extend our points lead and we got some bonus points this weekend. That was our plan coming into this weekend. We have a good handle on this tune up and I think we can definitely get more out of it.”

Hight will match up with veteran racer Jack Beckman in the first round of eliminations on Sunday. Hight has a 21-18 advantage over Beckman, 2-0 in 2018. The last time Hight won a race from the No. 7 position he defeated Beckman in the finals of the 2013 Chevrolet Performance U.S. Nationals.

Sixteen-time champion John Force continued the consistency of the John Force Racing teams with another two clean qualifying passes on Saturday. He will be racing for win No. 150 from the eighth qualifying position thanks to a 3.914-second pass at 330.72 mph Saturday evening. Like Hight, Force matched his Friday night pass of 3.932-seconds to start Saturday but Force also matched his Friday night speed at 329.26 mph in his PEAK Coolant and Motor Oil Chevy Camaro.

“We have been struggling with a combination of a young team and some early on mechanical issues, but we have started to come around. We got down the race track every run this weekend. Now I have a race car I can race tomorrow,” Force said. “A lot of it is luck, but a lot of it is talent. I come here for Bruton Smith and he told me to get out there and whip these guys. I love this man. We are racing for Advance Auto Parts to beat cancer this weekend and I have never been prouder of that.”

John Force will be taking on rival Bob Tasca III in the first round on Sunday. Force is 11-14 against Tasca but beat him in the semis at this race in 2014, the only time they’ve raced at zMAX Dragway.

Finally, Courtney Force and her True Timber Advance Auto Parts Chevrolet Camaro will go into race day as the No. 12 qualifier. The four-time 2018 winner was on great run in the first Saturday qualifying session but shook her Goodyear tires loose and lost power just past half track. In the final session of the day Force was on an even stronger pass when her Funny Car lost traction for the second time of the day slowing to a 4.057 second elapsed time. Following the run the regular season point leader was brutally honest on her goals for tomorrow as well as the final qualifying run.

“We had a couple problems through qualifying and on that last run I let the car get me to the outside. My (steering) correction was a little too hard and it upset the tires,” Force said. “That caused it to spin the tires down track. I created that problem for myself and I am extremely disappointed. That was a run that could have put us in the top half of the field. I have to make up for it when it counts. Hopefully we can turn it around tomorrow. I don’t like the feeling of letting my team down. I have put a lot of pressure on myself to really perform at my best and not let this car pull me out of the groove. I am going to keep my focus to get this race car down there to the finish line and outrun everyone tomorrow.”

“We have to make up a lot of points and we need to make tomorrow count,” said Force. “It will be an important day for this Advance Auto Parts team to make some strides to get this championship. We will have to give it all we have in our match up with Cruz (Pedregon). He has a great car but I think our Chevrolet Camaro is pretty great too. When you look at our incremental times I think we have a car that can beat him.”

Against two-time world champion Pedregon the youngest daughter of John Force is 8-7 and most recently defeated him in the semifinals of the Southern Nationals on the way to victory in Atlanta earlier this season.