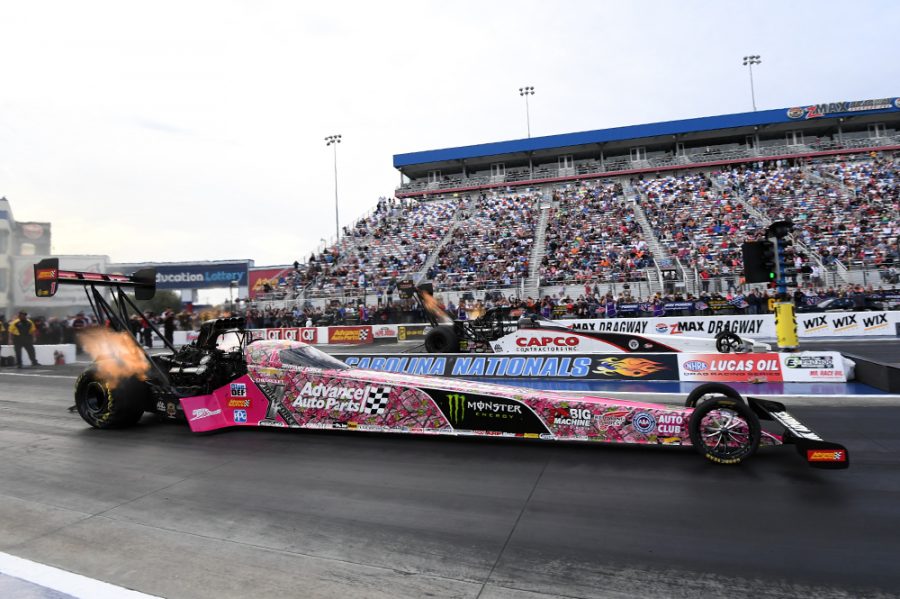 Force and her team turned a corner at this weekend’s race. With eight clean, solid and impressive runs down what is considered the Bellagio of racetracks, the Advance Auto Parts Monster Energy team has moved up to sixth in the Mello Yello points standings, just 10 points out of fifth, and added a new level energy to a team that has been struggling since their last victory in Houston at the Spring Nationals.

Force came into race day as the No. 1 qualifier after four consistent trips down the track including a stout 3.700-second pass during the final qualifying session. Her efforts earned her a match-up with Rookie of the Year candidate Audrey Worm in round one. Force had the advantage from the start and never trailed laying down a 3.717-second pass at 323.12 mph while Worm got into trouble early.

Dom Lagana had lane choice by one one-thousandth of second over Force in the second round. The TrueTimber pink camo Advance Auto Parts dragster proved that lane choice didn’t matter when it crossed the finish line at 3.702 seconds and 328.54 mph to put Force in the semifinals over Lagana’s 3.730 at 329.58.

Force matched up with a teammate of sorts in the semifinals. Mike Salinas and Force share the expertise of legendary tuner Alan Johnson. Force and her crew continued to show their dominance when they ran 3.708-seconds at 330.07 mph to send Salinas with his 3.737 at 328.94 packing. The Advance Auto Parts team would have lane choice over championship front-runner and 2017 runner-up Steve Torrence in the finals.

Force has only raced Torrence in a final round once before in 2017 when she defeated him for the Dodge Nationals victory in Reading, Pennsylvania. While Force had the dominant dragster all day long, Torrence had a slight edge with his 3.703-second pass at 329.67 mph. Had Torrence slipped up, Force’s 3.708-second run at 329.26 was right there to pick up the win.

“This has been a killer weekend for our Advance Auto Parts Monster Energy Chevrolet Top Fuel team. We are on top of the world right now. We have been struggling all season and it’s tough to keep that momentum and that motivation when you go out first round week in and week out. There is nothing tougher than that. But I have some awesome guys behind me, Alan Johnson, Brian Husen and this whole team. They never gave up on us,” Force explained. “Alan Johnson last weekend told me that they had made some changes and I knew that we would turn things around. To come out all the way to the finals, there is no hanging your head there. I am so proud of that and so pumped for these guys. Now we will go out to Vegas in two weeks and we are ready to get a win before the season ends.”

John Force moved his way into seventh in the points standings after racing his PEAK Coolant and Motor Oil Chevrolet Camaro into the semifinals. Force took on longtime rival Bob Tasca III in the first round putting on a good show for the crowd with some starting line gamesmanship. With a .037 reaction time and 3.970-second elapsed time, Force sent Tasca to the trailer. Tasca was .073 on the starting line and slowed to 4.146-seconds across the finish line.

In the second round, Force met Dave Richards who upset No. 1 qualifier Tommy Johnson Jr. in the first round. Force had a clean pass crossing the line at 3.948-seconds and 329.18 mph to Richards’ 4.272 and 260.56 mph. The win put Force up against championship front-runner J.R. Todd.

“I had a good day with this PEAK Camaro race car. It has consistency now. It went down the race track every run in qualifying and every run today. We were trying to get a little bit faster and dip into the 3.80s. We just couldn’t get there and it burned up some pistons,” Force said. “Overall as a team we are doing good. We moved up in the points and Brittany is moving up. It is a long ways to that championship and we are running out of races. I was trying to take the kid out, JR Todd, he is a good guy. I was trying to help Robert. I just couldn’t get it done. We’ll see where it goes.”

Robert Hight held onto the points lead after a quarterfinal exit at the NHRA Carolina Nationals. Coming off back-to-back wins, Hight had a big round one match up against former champion Jack Beckman. Hight logged a 3.877 second pass at 330.96 mph in his Automobile Club of Southern California Chevy Camaro to Beckman’s 3.906 at 329.26 to defeat Beckman.

“We burned a piston that run and it shut off early because of the NHRA safety systems on the car. We are not far off. We had low E.T. first round and we are running well. It’s just the gremlins. Ron Capps and his team ran like they had nothing to lose. They threw the dice and got away with one,” Hight said. “So, two races to go and we don’t know how it’s going to shake out. We know this championship is going to come down to Pomona and the Auto Club Finals. We will be ready in Las Vegas. It will be close no matter what. I am proud of this Auto Club team. We will be ready for the last two races.”

From the No. 12 position, Courtney Force faced off with veteran racer and two-time champion Cruz Pedregon in the first round. Force’s Advance Auto Parts Chevy Camaro started dropping holes early and as a result the Funny Car contender had to shut off early. Force had a 4.123-second pass at 232.31 mph to Pedregon’s 4.019 at 270.

“Our Advance Auto Parts team had really great incremental times. In the first round the conditions were prime and we had the car set up to run in the 80s but I think we got a little ahead of ourselves. We overpowered the track and unfortunately we were ahead the whole race but we spun down track and we lost the race,” explained Force. “It’s definitely a bummer and our team is disappointed. I think we have a fast hot rod, we just have to get the kinks worked out. I am really looking forward to going to Las Vegas and hopefully we can move up a little bit in the points these last two races and take home a win.”

The early exit puts Force sixth in the Mello Yello points standings. With two races left Force is still in the hunt for the championship especially with points and a half up for grabs at the Auto Club Finals in Pomona, Calif.

John Force Racing will have a weekend off before heading to Las Vegas for the NHRA Toyota Nationals Oct. 26-28 at The Strip at Las Vegas Motor Speedway.