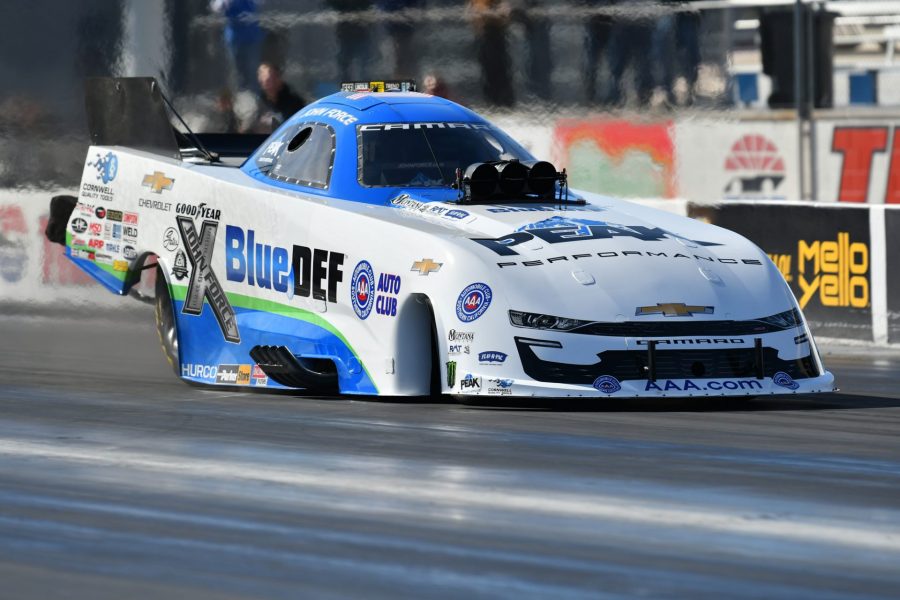 POMONA, Calif. (Feb. 05, 2020) — On his home track, one on which he has celebrated 16 victories in three different events, Hall of Fame owner/driver John Force begins another new chapter this week when he sends his BlueDEF Chevrolet Camaro SS after the Funny Car title in the 60th annual Lucas Oil Winternationals at Auto Club Raceway at Pomona.

Force strung together a series of consistent passes in the .80s over three days of preseason testing at The Strip at Las Vegas Motor Speedway with his best performance being a 3.854-second pass at 334.40 mph. With the strong showing from the BlueDEF team headed by Danny Hood, Ronnie Thompson and Tim Fabrisi, the winningest driver in NHRA history is more than ready to continue his hunt for a 17th NHRA championship.

“We had a good time at testing last week. My BlueDEF team worked really hard over the three days and we had some good runs and were right there with Robert, so I’m feeling excited,” said Force. “Robert, Brittany and Austin all looked solid and I’m happy to see it all coming together. I can’t wait to be back racing and seeing what we can do this season.”

In 2019, the 70-year-old icon silenced a new generation of non-believers with a serious bid for yet another unparalleled Funny Car title that included career wins No.150 and 151, the latter in the world’s most prestigious drag race, the NHRA U.S. Nationals at Indianapolis, Ind.

After taking his 11,000 horsepower Chevy to the semifinals or beyond in 11 of the 18 races leading up to the NHRA’s Countdown to the Championship, the sport’s biggest winner climbed to second place behind teammate, protégé and eventual champion Robert Hight before finishing fourth.

“It’s the same every year, win the championship. That’s what we’re out here for, for BlueDEF, PEAK, Chevrolet, Auto Club, Montana Brand, Monster, our newest sponsor, Flav-R-Pac, and all the others. They’re the ones who make it possible,” Force said. “I love this sport, but it’s the competition that keeps me going. I know it can’t go on forever, but I can still drive my hot rod and when I’m in that car, that’s when I really feel alive. I’m not trying to be the oldest to do anything. I just love drag racing. When it’s over, I’ll know it, but right now there’s no place I’d rather be than in my race car.”

Force couldn’t be more optimistic about hoisting another Mello Yello championship trophy. When he does so, it’ll be a unique family accomplishment insomuch as son-in-law Dan Hood, whose wife Ashley was the first woman to win a Funny Car race, will be responsible for the tuning decisions on the BlueDEF Camaro with assistance from veteran crew members Ronnie Thompson and Tim Fabrisi.