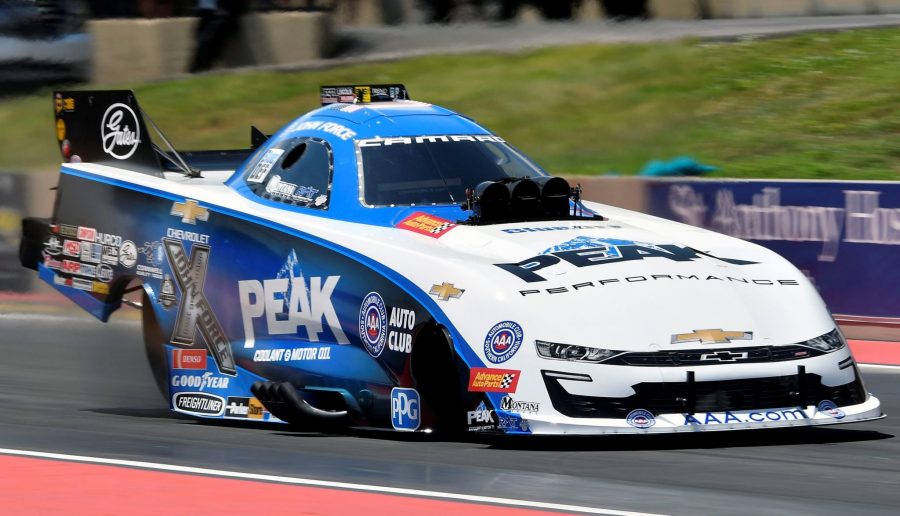 SONOMA, Calif. (July 24, 2019) — It’s not like John Force really needs any extra incentive in his bid to win for a mind-boggling 150th time on the NHRA Mello Yello tour, but there’ll definitely be a little more in the motivational fuel tank this week when he sends his PEAK Coolant and Motor Oil Chevrolet Camaro SS after the Funny Car title in the 31st annual NHRA Sonoma Nationals.

After all, Sonoma Raceway, the site of the second event in the arduous Western Swing that traditionally has separated championship contenders from championship pretenders, is like a second home to the Hall of Fame inductee and 16-time Funny Car world champion.

Its proximity to the Force family compound in Lake Tahoe makes it feel every bit like a home game and the fact that Force has won the race eight times, most recently in 2016, simply adds to his growing confidence at the wheel of a hot rod Chevy that has been the most consistent car in the class all season.

That consistency is reflected in the fact that while he has yet to celebrate in the winners’ circle with new crew chiefs Brian Corradi and Dan Hood, he rolls into northern California in third place in the Mello Yello points standings with just four races remaining before the start of the Countdown to the Championship.

“We’re getting closer (to the milestone victory),” Force said. “I have a great race car and a great team. I just need to keep doing my job in the driver’s seat and going rounds. We keep giving ourselves a chance, it’s gonna happen.

“There’ve been a lot of changes to this car since Courtney (the youngest of Force’s four daughters) drove it last year. For one thing, I’m 70 pounds heavier, so we’ve had to adjust for that. It’s taken me some time to get used to everything, but we’re getting there. I’m more comfortable every week.”

At his age, Force knows that every win is precious. However, winning at Sonoma may be more special than anywhere else. That’s because Sonoma Raceway is teammate and point leader Robert Hight’s home track. Moreover, it was the home track of the late Eric Medlen, whose legacy lives on in the event’s “ice cream social” winners’ circle.

A native of nearby Oakdale, Medlen gave up a promising career as a rodeo cowboy to become a drag racing crewman, working alongside his dad, John, to run a second John Force Racing Funny Car driven by current FOX TV analyst Tony Pedregon.

A talented mechanic on Force’s championship-winning Funny Cars, the younger Medlen became the first of JFR’s Next Generation drivers in 2003. He quickly became one of the sport’s most popular young stars. Among his six career wins, all of them with his dad serving as crew chief, was a home track victory in 2006. Eight months later he lost his life in a testing accident in Florida, a catastrophe that changed not only the sport but Force’s perception of it.

Four months after the death of his young protege, Force won Sonoma for the seventh time. It remains one of the most emotional victories of his career. Force won the Sonoma Nationals for the first time in 1990 and would win three more times in the next four years. He also won in 2000 and 2002 and has qualified No. 1 on eight occasions, winning from No. 1 in 1994 and 2002.