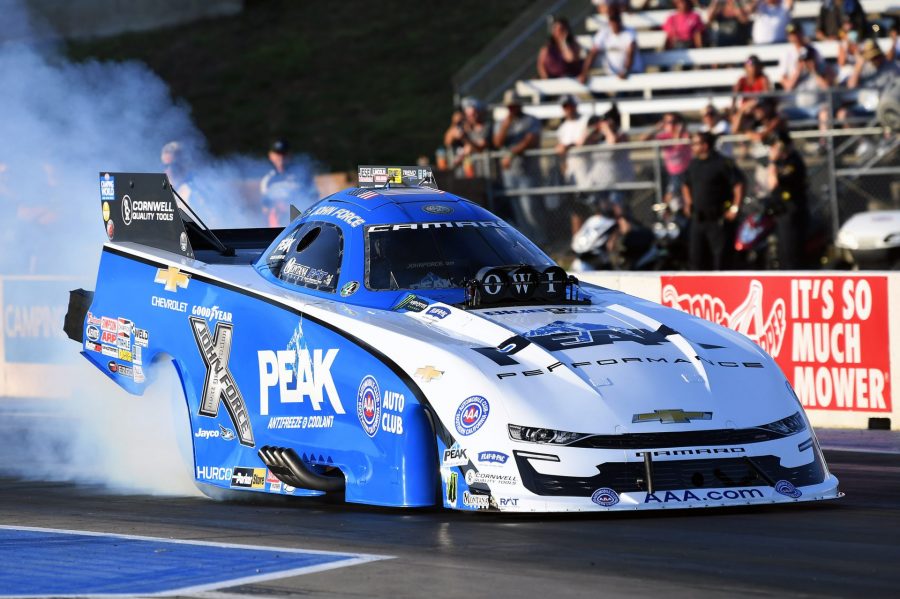 BRAINERD, Minn. (Aug. 20, 2021) – Coming off the 154th win of his career, third of the season, John Force and the PEAK Antifreeze and Coolant Chevrolet Camaro SS sit No. 3 in the Lucas Oil NHRA Nationals Funny Car qualifying order after one run Friday at Brainerd International Raceway. Robert Hight and the Automobile Club of Southern California Chevy are currently No. 5 while Brittany Force and the Monster Energy dragster are No. 4.

Right out of the box, John Force handled the PEAK Chevy to a solid 3. 968-second pass at 322.42 mph that lands him in the No. 3 spot heading into Saturday. Force is looking to secure his ninth No. 1 qualifying position at the event.

“Good day today. Avoided the rain, got the car down clean. It’s a great car. Danny Hood and Tim Fabrisi have this PEAK Chevy under control. Now I just have to do my job,” Force said. “Loved seeing all the fans in the sands. It was a good session, pretty much everyone made it down, so we put on a show. We’ve got two more runs tomorrow to set us up for race day, so we’ll see how it goes.”

Robert Hight and the Auto Club boys had a clean run at 3.971-seconds and 307.72 mph to start off Hight’s birthday weekend. Hight is looking for his third No. 1 position at Brainerd International Raceway, he had back-to-back No. 1s in 2017 and 2018.

“We’re getting back to where we need to be. Two more runs tomorrow to get this Auto Club Chevy set up for race day,” Hight said. “Jimmy Prock and Chris Cunningham, I know they’ve been constantly thinking about this Camaro. We’ll be good to go.”

With a victory under their belt and renewed confidence, Brittany Force and the Monster Energy team are looking for their fifth consecutive No. 1 qualifier of the season, second at the Brainerd event. They started with a 3.813-second pass at 286.98 mph after hazing the tires down track and shutting of early.

“First qualifying pass here in Brainerd and our Monster Energy Flav-R-Pac team ran a 3.81. We had holes out and I lifted before the 1,000-foot but it secured us the No. 4 spot for the evening,” Force said. “The track conditions should be good tomorrow with temps cooling down. Looking forward to improving and stepping it up tomorrow.”