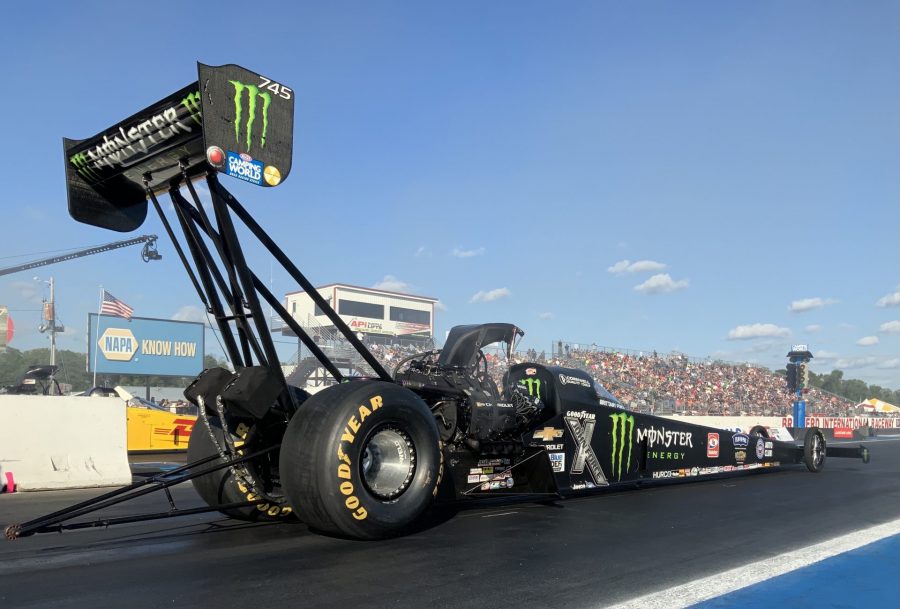 BRAINERD, Minn. (Aug. 21, 2021) – Brittany Force and the Monster Energy team raced to their fifth consecutive No. 1 qualifying position Saturday at the Lucas Oil NHRA Nationals at Brainerd International Raceway. Robert Hight and the Automobile Club of Southern California Chevrolet Camaro SS team enter race day at No. 6 while John Force and the PEAK Antifreeze and Coolant Chevy sit No. 10.

In their second qualifying try, Brittany Force and the Monster Energy team had trouble at the start. With a hole out almost immediately, the dragster was shut off early for only an 8.381-second pass at 80.43 mph. The David Grubnic and Mac Savage led team made up for it in the final qualifying. The Monster Energy dragster broke their own track speed record when they crossed the line at 334.98 mph and a stellar 3.675-seconds. The stout run earned them their fifth consecutive No. 1 qualifying position, seventh of the year, 27th of Force’s career and second at the facility. Five No. 1s in a row is the most by a Top Fuel driver since Larry Dixon in 2009. Their efforts earn them their fourth bye run of the year in the first round of eliminations.

“Coming out of that win in Topeka with my dad, it was incredible for all of John Force Racing, being able to double up like that. For my Monster Energy / Flav-R-Pac team especially.  We got it done last weekend and we plan to come out and do it again here in Brainerd,” Force said. “There’s a different energy in the pits, after winning and celebrating in the winners circle, celebrating all our hard work. There’s no better feeling than winning. That’s why we’re out here. The wins make the bad bays suck a little less. It’s just finding it again on race day we want to do it again. We want to repeat. We want to win.”

Robert Hight and the Auto Club Chevy and John Force and the PEAK Chevy lined-up side-by-side for their second qualifying pass. Both Camaros had tire smoke mid-track. Force would go 4.755 at 167.24 while Hight would cross the finish line at 4.844 at 161.83.

Hight and the Auto Club team would improve in the final session. Their 3.909-second run at 222.88 mph moved them from No. 10 into the No. 6 position heading into race day. The Auto Club Chevy will face J.R. Todd in the first round.

“We’re looking good for tomorrow. We have some good data. We just overpowered it earlier today. Jimmy Prock and Chris Cunningham are always working to get this Auto Club Chevy running just right,” Hight said. “Tomorrow will be somewhat similar to today, maybe a little warmer. Planning to go some rounds, get in the winners circle and make a move in the points standings.”

For Force and the PEAK Chevy, the third qualifying session would bring them more trouble. The Camaro would get loose mid-track to cross the finish line at 4.201-seconds and 222.88 mph. Force will be 10th heading into race day and face Ron Capps in the first round.

“Well, we’re in the show. Not maybe where we want to be, but tomorrow is another day and we’ll be okay,” Force said. “Points are looking good and if I do my job tomorrow the PEAK Chevy could be moving up just in time for Indy and the Countdown.”

Eliminations at the Lucas Oil NHRA Nationals and Brainerd International Raceway are slated to begin Sunday at 11 a.m. Television coverage will continue with a second qualifying show on FS1 Sunday at Noon ET / 11 a.m. CT. Eliminations will be on FOX Broadcasting Network (FOX) at 3 p.m. ET / 2 p.m. CT.