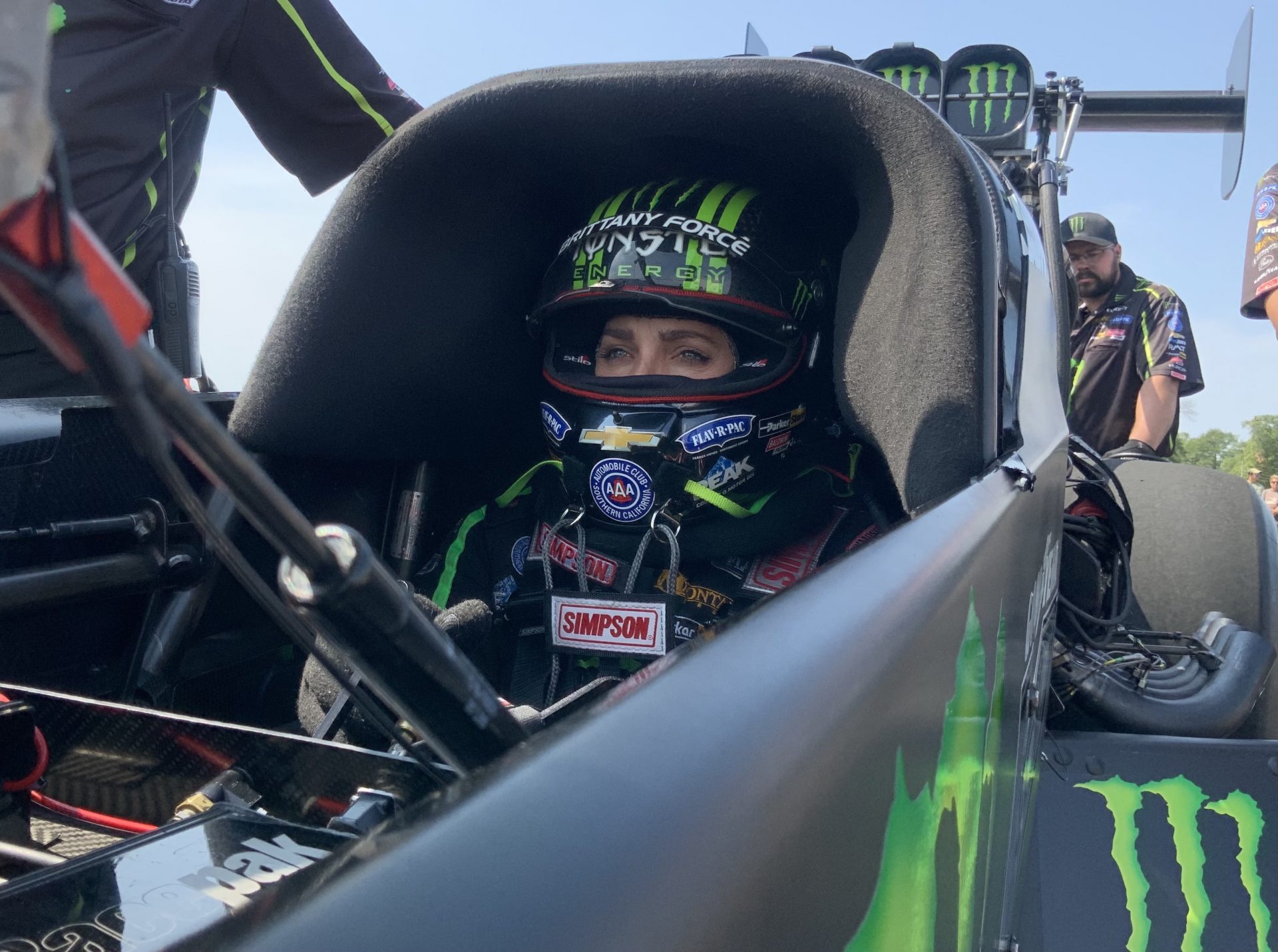 BRAINERD, Minn. (Aug. 22, 2021) – Brittany Force and the Monster Energy team rode the momentum from their Topeka win and five consecutive No. 1 qualifiers to a semifinal finish Sunday at the Lucas Oil NHRA Nationals at Brainerd International Raceway. It was an early day for both John Force Racing Funny Cars with Robert Hight and the Automobile Club of Southern California Chevy Camaro and John Force with the PEAK Antifreeze and Coolant Chevy going out in the first round.

With her seventh No. 1 qualifying position of the season, Brittany Force and the Monster Energy dragster earned a bye first round of eliminations. Crew chiefs David Grubnic and Mac Savage took advantage of the stress-free run by going 3.680-seconds at 334.40 mph for lane choice over Antron Brown in the second round.

The consistency continued as the Monster Energy team improved to run a stellar 3.672-seconds at 333.33 mph, the quickest pass of the event, to defeat Brown’s 3.771 at 315.78. The victory set Force up to run Clay Millican, a rematch from the final round at Heartland Motorsports Park in Topeka last weekend. The Monster Energy dragster would run into trouble almost immediately and have to shut off early for a 7.971-second run at 77.65 mph giving Millican and his 3.876 pass at 265.95 mph the win.

“We’re still looking into what happened on that last run. It shook really hard and it wasn’t going to drive through it, it was going to go into tire smoke. Still trying to figure out what went wrong on the run. Overall, it was a good day, we made a semifinal round appearance. To win this championship, yes we need to win races, but if we keep hanging in there, going rounds, No. 1 qualifiers, I know we’re still in a good position, it’s in our range, we’re chasing it down, we’re going after that championship.”

After bumping up to the No. 6 qualifying spot off a clean 3.909-second run at 327.51 mph on Saturday evening, Robert Hight and the Auto Club Chevy experienced a mechanical issue down track in the first round. The Camaro would shut off near the finish line for Hight to record a 3.988-second pass at 274.05 mph and be bettered by J.R. Todd’s 3.970 at 321.73.

“Well, we’re definitely not where we want to be that’s for sure. Something happened, something mechanical, on that run. It shut off, I think it threw the clutch out of it,” said Hight who secured his spot into the NHRA Countdown to the Championship this weekend. “We have to get our act together. This is the time of the year where you better have everything together or you better be testing. That’s what this Auto Club Chevy is going to do.”

Coming into the race with the points lead off his third win of the season, John Force and the PEAK Chevy struggled in qualifying with only one clean pass Friday afternoon that had them No. 10. Their positioning would put them against longtime rival Ron Capps in the first round. Force would go on a wild ride mid-track, nearly hitting the wall but keeping the PEAK Camaro in his lane. With a 6.205-second run a 112.01 mph Force would be bettered by Capps’ 3.953 at 323.35.

“That run was pretty exciting, that’s why I drive a fuel Funny Car. End of the day, every point, every round counts. What counts is making the Countdown or you don’t have a chance at winning the championship and we did that this weekend,” said Force who drops to fourth in the points. “Didn’t go the way we wanted today. My best car, Robert Hight was out, and I was right behind him. Luckily Brittany went some rounds. We’ll see you all at Indy.”

The Dodge//SRT NHRA U.S. Nationals, the final race of the NHRA Camping World Drag Racing Series regular season, takes place September 3-5 at Lucas Oil Raceway in Indianapolis. Teams will earn points and a half at the event as a last effort to gain points positions before the Countdown to the Championship begins and the points reset.