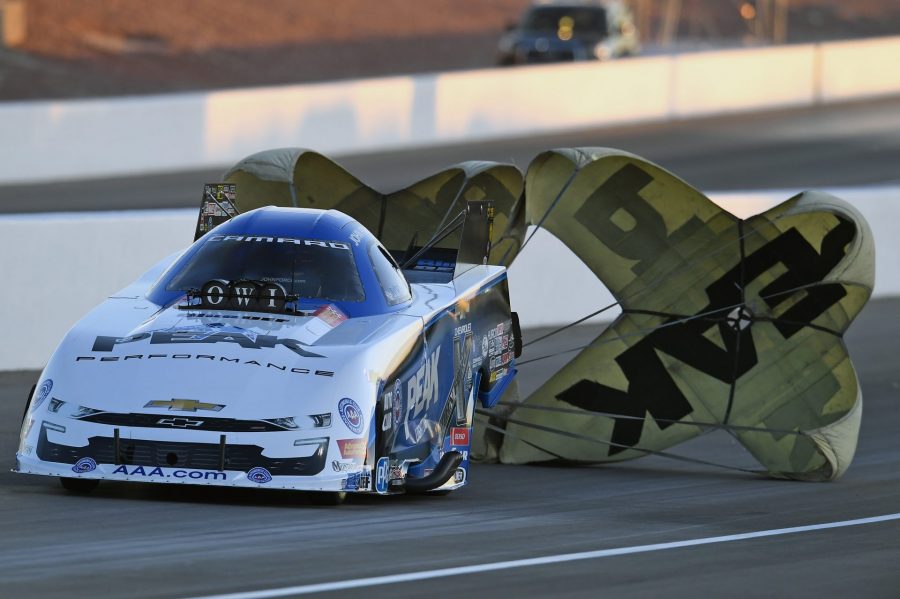 LAS VEGAS (Nov. 2, 2019) — John Force and the PEAK Coolant and Motor Oil / Lighting Chevrolet Camaro SS team improved from their Friday qualifying to sit No. 3 heading into race day at the Dodge NHRA Nationals presented by Pennzoil at The Strip at Las Vegas Motor Speedway. Brittany Force and the Advance Auto Parts team ended qualifying in the No. 2 spot, Robert Hight and Auto Club of Southern California Chevy are eighth and Austin Prock with the Montana Brand / Rocky Mountain Twist dragster are tenth.

In the third qualifying session, racing legend John Force and the PEAK Coolant and Motor Oil / Lighting Chevy Camaro blasted down the dragstrip to cross the finish at 3.853-seconds and 330.72 mph. For a short while Force would take over the Funny Car No. 1 spot and set the track elapsed time record while also going fastest of the session. It wasn’t until the second to last pair that Force’s record would be outdone pushing him down to No. 3. The 16-time champ would have the chance to reclaim the top spot as the last pair of Funny Cars down track but had trouble early smoking the tires for a 7.276-second, 87.93 mph pass.

“No complaints here. We have a fast hot-rod. This PEAK Lighting team, Brian Corradi, Danny Hood and Tim Fabrisi, they’re all working hard. They’ve been doing their job and I’ve been trying to do mine. We’ll be looking good for tomorrow,” said Force who will line up with an unfamiliar foe, Steven Densham, who is his 144th different opponent and keeps the streak of having faced at least one new opponent every year of his 43-year career. “We always have a lot of sponsors out with us at this race. PEAK, Auto Club, Advance Auto Parts, Montana Brand and Chevy, they’re all here, Baldwin Filters, PPG, its full in our hospitality and we love having them all here and putting on a good show. Tomorrow we’ll be looking to put them in the winner’s circle with us.”

Entering the day sitting No. 1 after a blistering 3.659-seconds at 338.17 mph Friday night, Brittany Force and the Advance Auto Parts team smoked the tires and shut off early to make a 3.782-second pass at 273.88 mph in the third qualifying session. The 2017 Top Fuel world champion and her David Grubnic and Mac Savage tuned dragster got back on track for the final session when they laid down another stout pass at 3.660-seconds and 335.15 mph but would move into the No. 2 qualifier spot. Force will matchup against Pat Dakin in the first round of eliminations.

“Feeling very confident about this weekend so far. Advance Auto Parts teamed up with Monster Energy and we’ve had a fast car all weekend long. We set the national speed record yesterday going 338.17 and picked up a handful of bonus points through qualifying,” said Force who is chasing her second win of the season and first at the facility. “We’re currently sitting No. 2 going into race day so we’re feeling good. We need to win this thing because we’re still going after a championship.”

Robert Hight will start race day from the No. 8 spot after powering his Auto Club Chevy Camaro SS to a stellar 3.886-second pass at 324.90 mph Friday night. Carrying over the momentum from Friday’s qualifying sessions, Hight propelled his 11,000-horsepower machine to an impressive 3.897-second pass at 329.67 mph to stay No. 6. The Auto Club team overpowered the track and hazed the tires in the final qualifying session to cross the finish line at 7.357-seconds and 87.78 mph and would move two spots into eighth. The 15-year racing veteran will face Tim Wilkerson in the first round of eliminations as he battles for his seventh win of the season, sixth at the facility and third at the fall event.

“Well, we started the day off strong, ran an .89 in the third session but that last one was (crew chief) Jimmy Prock and Chris Cunningham pushing it, trying to see what we could get out of the track. We’re sitting in the No. 8 spot which isn’t a bad place to be. We picked up some bonus points and we still have the points lead going into tomorrow. Every point and everything we do right now counts so tomorrow is going to be a really important day for this Auto Club Chevy team,” said Hight. “The conditions will be similar to how they were today, a little warmer and Jimmy and Chris know how to run this car in the warmer conditions, so I’m not worried. Tomorrow is going to be an exciting day for the championship battle.”

“Not the day this Montana Brand / Rocky Mountain Twist team wanted obviously. We’ve been struggling all weekend. A lot of the things we changed before the St. Louis race that had shown so much success for us just isn’t working out here. You’re about halfway to Denver (elevation) and you kind of have to change your whole program,” said Prock who will compete against Richie Crampton in round one Sunday. “That last session, we went up there and changed a handful of things and it just left out of control. Way too much wheel speed, tire got hot and it smoked the tires. We’ll be fine tomorrow, we’re in the show. We’re known to be a sneaker on Sunday and we look forward to ruining someone’s day tomorrow.”

Eliminations at the Dodge NHRA Nationals presented by Pennzoil at The Strip at Las Vegas Motor Speedway are slated for 11 a.m. on Sunday with live finals coverage starting at 3 p.m. ET on FOX Sports 1 (FS1).