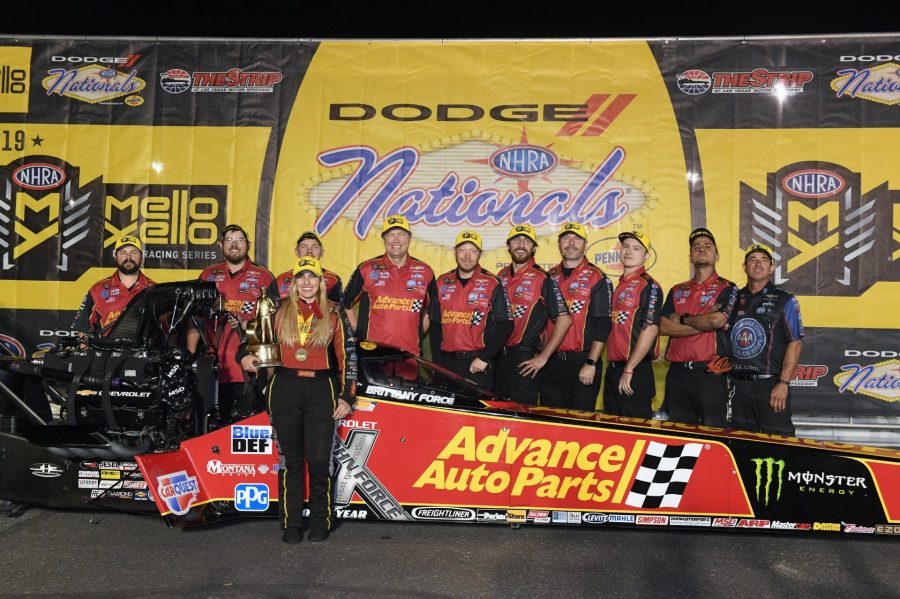 LAS VEGAS (Nov. 3, 2019) — Brittany Force and the Advance Auto Parts team, who now own both ends of the Top Fuel national record after running 338.17 mph Friday night, raced their way to the second win of their season, 10th of Force’s career and first at The Strip at Las Vegas Motor Speedway Sunday at the Dodge NHRA Nationals presented by Pennzoil at The Strip at Las Vegas Motor Speedway. The win puts Force just sixteen points out of the NHRA Mello Yello points lead with one race remaining.

“Las Vegas is a home track for me. I grew up out here racing super comp and A-fuel. I’ve always wanted to win here. This weekend has just been incredible for this Advance Auto Parts team. We have the record with mph, a 338. It’s incredible to hold that with the Advance Auto Parts boys. And we set the ET this year too. We’ve accomplished a lot but really what we’re going after is a championship together.”

Entering eliminations as the No. 2 qualifier, Force opened race day handling her Advance Auto Parts dragster to a 3.689-second pass at 333.16 mph to defeat Pat Dakin who went up in smoke early for only a 7.786-second pass. The win set her up for a second-round matchup with teammate Austin Prock. Force would outrun the rookie with a 3.709-second pass at 330.72 mph to his 3.732 at 331.69.

Heading into the semifinals which featured the top four in the points standings, Force would watch as Doug Kalitta, who had sat ahead of her in second in points, had a mechanical malfunction allowing points leader Steve Torrence to sail to an easy victory before she lined up with Billy Torrence, Steve’s dad who sits at fourth in points.

Force would beat Billy Torrence on a holeshot thanks to her .063-second reaction time on the tree and a 3.714-second pass at 329.99 mph. Torrence would run 3.710 at 332.10 with a .087 reaction time. The semifinal win along with Kalitta’s loss would move the Advance Auto Parts team up to the No. 2 spot in the Mello Yello points standings.

Facing off with the reigning world champion and points leader, Steve Torrence, Force and the Advance Auto Parts team would continue their dominance laying down the quickest pass of the event at 3.652-seconds, a track record, and 334.73 mph to defeat Torrence’s 3.719 at 330.63 and move within just 16 points of taking the points lead.

“It’s a Vegas win, it’s a win in the Countdown which is huge and it moved this Advance Auto Parts team that much closer to the No. 1 spot so, this is a big win for our team. Like I said, it’s been since Houston since we’ve won so we’ve been out of the game for a little while but we’re turning a corner at the right time,” Force said. “We have Vegas and then we go right to Pomona. There’s one left and our minds are in the right place now.”

The victory marks the 151st win for women in the NHRA, Erica Enders in Pro Stock won the 150th just moments before Force crossed the finish line.

“I always cheer the ladies on. There’s only a few of us out here and you know, Erica Enders, what she’s done for this sport, with two championships, I’ve always looked up to her. She’s incredible,” Force said. “She started in Jr. Dragsters. I remember watching her movie when it came out on Disney. Courtney and I would watch that thing over and over to get us pumped up before we’d go race in Super Comp, so to share the winner’s circle with her this weekend is pretty awesome. She’s a great friend, she’s an incredible driver and pretty cool that we did 150 and 151 today.”

Robert Hight powered his Auto Club of Southern California Chevy Camaro to a clean 3.893-second pass at 329.75 mph to defeat veteran Tim Wilkerson in the first round. In the second round, Hight would find himself racing against Jack Beckman, the driver who is second in points. It was a clean drag race with Hight going 3.891-seconds at 329.75 mph but his reaction time of .077-seconds wouldn’t be enough for Beckman’s 3.907 pass at 325.92 and .047 reaction time.

“A little bit of a rough weekend for the Auto Club team. We had a good race car today and we could have won this race but Jack Beckman had a great light, he might have had a little luck on his side,” said Hight. “Lucky for us we’ve had a great car all season and we still have the points lead. I said from the very beginning of the Countdown that it was going to come down to the Auto Club Finals at Pomona, the last day and maybe even the finals on Sunday. Things will be intense; I wish we didn’t have to wait two weeks.”

Austin Prock and the Montana Brand / Rocky Mountain Twist Top Fuel team opened race day with a round one victory after matching up against Richie Crampton. Prock, who had the starting line advantage, powered to a 3.743-second pass at 331.04 mph to better Crampton’s 4.497 at 195.96 after he smoked the tires. Heading to the quarterfinal, Prock was paired against teammate Brittany Force. The John Force Racing duo put on a show in a close side-by-side drag race but Prock’s 3.732-second pass at 331.69 mph was unable to propel past Force’s 3.709 at 330.72 mph.

“We turned our race car around today and I’m pretty proud of how we ran. We just came up short in the second round to our teammate. We left the starting line first and got outran but it was a good ole drag race. Brittany redeemed herself winning on that holeshot in the semifinal so she’s moving up in the points and now with that win here today, I’m hoping she can wrap this championship up for John Force racing,” said Prock who remains No. 6 in the Countdown points. “You know, I’m just proud of how far this team has come and how we’ve been doing lately. Just have to get our ducks in a row and get a little Lady Luck on our side and we’ll find ourselves in the winner’s circle.”

John Force, who qualified third, launched his Brian Corradi and Danny Hood tuned PEAK Lighting Chevy Camaro SS to a 3.927-second pass at 325.92 mph in the first round to defeat Steven Densham and his 3.958 at 320.20. In the quarterfinals, Force, who was quicker on the tree with a .018 light, crossed the finish line with a 4.027-second pass at 321.73 mph falling short to Bob Tasca’s 3.891 at 331.61. The 16-time Funny Car champion heads to the last event on the NHRA Mello Yello tour sitting fourth in the Mello Yello points standings, only 16 points out of third.

“Brian Corradi and Danny Hood, all the guys on my team gave me a great race car this weekend but we just got beat in the second round. There’s points and a half at Pomona so we’ll see how that goes. This ‘Old Blue’ PEAK Chevy is a fast car,” said Force. “Brittany won today and that’s great for Advance Auto Parts and all our sponsors. Robert is still in the points lead and the Prock kid is in it. We’ll all be ready for Pomona.”