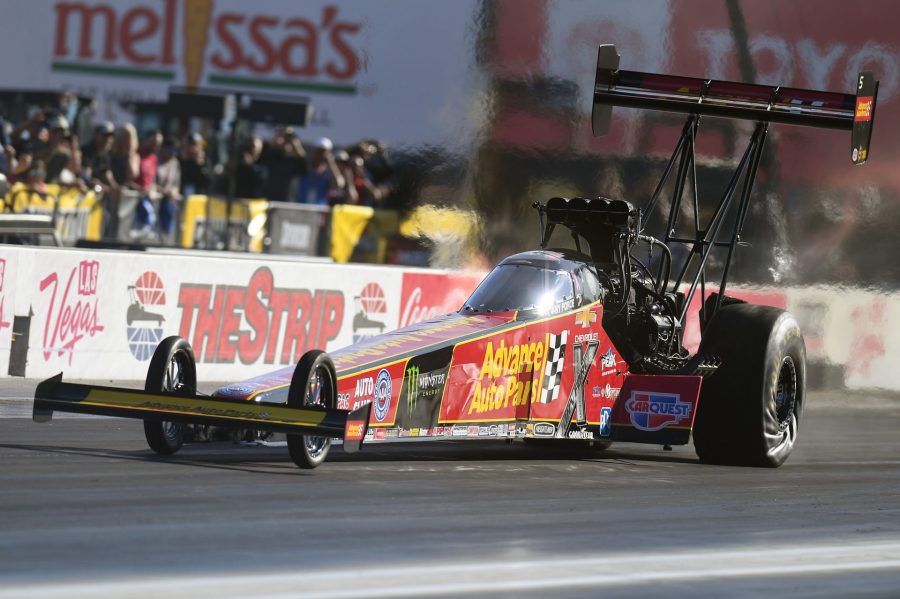 LAS VEGAS (Nov. 1, 2019) — Brittany Force and the Advance Auto Parts Top Fuel dragster team now own both ends of the NHRA Top Fuel National records after they ran 338.17 mph in 3.659 -seconds to take over the No. 1 spot Friday night at the Dodge NHRA Nationals presented by Pennzoil at The Strip at Las Vegas Motor Speedway. They previously set the elapsed time record of 3.623-seconds at the opening Countdown to the Championship event at Maple Grove Raceway in Reading, Pa.

Force started her record setting night with a 3.717-second pass at 329.02 mph that was second quickest of the opening qualifying round. In the second session, Force would watch a slew of dragsters move up the qualifying ladder before lining up as the second to last pair and blowing her competition out of the water. Her striking pass of 3.659-seconds at 338.17 mph set both ends of the track record and also earned her three valuable bonus points for a total of five on the day.

“When Grubnic and I spoke before I jumped in the car, he said we were trying to run a .68 but I’m assuming once I got in and Grubnic saw some of those cars go down the track, he changed things up but a .65? I knew when I got out on the other end that it was going to be quicker than a .68,” said Force who has a familiar partner on the side of her dragster as Monster Energy teamed up with Advance Auto Parts for a special in-store offer, buy any two Monster Energy drinks for only five dollars. “A .65 is pretty outstanding here in Vegas. It’s one of my favorite tracks on the circuit and I’d love to win here. We’re off to a great start and we’ll take those bonus points we picked up today and that speed record which is pretty outstanding.”

Points leader Robert Hight and the Auto Club Chevy Camaro SS team opened qualifying at Las Vegas Motor Speedway with a stout 3.876-second pass at 332.84 mph to be quickest of the session and pick up three bonus points. Hight and the Jimmy Prock and Chris Cunningham tuned Auto Club Chevy came out in the evening session to make another clean pass of 3.886-seconds at 324.90 mph but would end the day in the No. 6 spot after a competitive Funny Car round.

“So, it wasn’t a bad day for the Auto Club team. Sixth isn’t where we really want to be going into the second day of qualifying, we burnt a piston tonight and we have to get that fixed but the good news is, we have two more runs tomorrow in good conditions to actually improve and I feel that we can run a track record,” said Hight who has six No. 1 qualifiers at The Strip, three at the fall event. “I think we can go out there and run an .83 or .84, and that’s what we’re going to do. Even though we’re the points leader, we’re not coming in here racing defensively but coming in here on the offense trying to gain every point we can and be No. 1.”

In his first qualifying pass, sixteen-time Funny Car world champion John Force powered his PEAK Coolant and Motor Oil / Lighting Chevy Camaro SS to 3.886-seconds at 317.87 mph to sit in the No. 5 spot. The racing legend, who is looking to secure his fourth No. 1 at The Strip, second at the fall event and sixth of the season, continued the momentum in the night session to cross the finish line with a 3.866-second pass at 329.02 mph and move into the No. 4 position.

“It was a good day. I’m qualified fourth right now with this PEAK Lighting hot rod, up there in the top. I ran an .86 in that last one and Robert is right up there too. Every point matters right now and he got some in the first session for low ET. The Prock kid is in there but I’m really excited about Brittany and the records she’s setting, how her car is running,” said Force. “I really like seeing Monster Energy and Advance Auto Parts working together, so to see Monster back on the Advance car is pretty cool but we’re out here with all our sponsors and we wouldn’t be here without them. We all want to be in the show so we can go out on race day and get them in the winner’s circle.”

Rookie of the Year candidate Austin Prock had trouble in the first qualifying session when he smoked the tires in his Montana Brand / Rocky Mountain Twist dragster to coast to the finish line for a 6.674-second pass at 89.72 mph. Coming into the Friday evening round in the No. 16 spot, the Montana Brand team led by crew chiefs Mike Green and Ronnie Thompson improved to No. 7 with a clean 3.726 run at 330.96.

“This Montana Brand / Rocky Mountain Twist team made a pretty decent run in Q2. We wanted to be a little quicker than that but just had to play it safe after being in the bottom of the show after the first session. I’m looking forward to tomorrow. Conditions are looking to be about the same as they were today so I think we’ll be able to improve. We’re sitting seventh right now but we’re looking for a little more tomorrow. I’m proud of my guys. They’re doing a really great job and we’ve had one of the best cars in the Countdown but just haven’t been able to catch a break, so hopefully our cards fall right and it’s our weekend.”

Qualifying at the Dodge NHRA Nationals presented by Pennzoil at The Strip at Las Vegas Motor Speedway continues Saturday with sessions at 1:30 and 4:15 p.m. Television coverage will continue Sunday with live finals coverage at 3 p.m. ET on FOX Sports 1 (FS1).