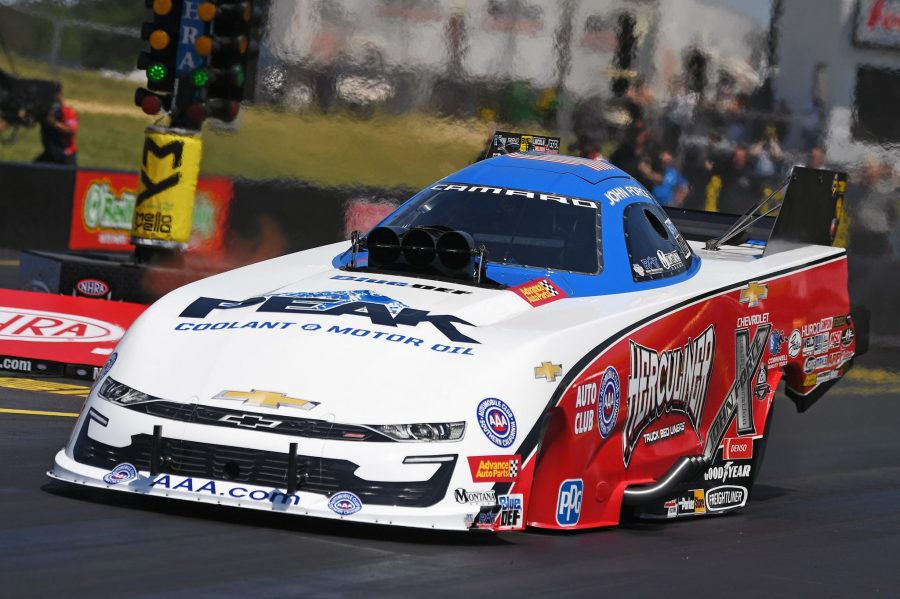 DINWIDDIE, Va. (May 18, 2019) — John Force and the PEAK Coolant and Motor Oil / Herculiner Chevy Camaro SS Funny Car team held onto the No. 1 qualifier Saturday at the Virginia NHRA Nationals at Virginia Motorsports Park. Robert Hight and the Auto Club team kept the No. 5 qualifying spot and in Top Fuel, Brittany Force and Advance Auto Parts and Austin Prock and the Montana Brand / Rocky Mountain Twist team remained No. 3 and No. 10, respectively.

On the chase for his historic 150th win, John Force snagged the second No. 1 qualifier of his 2019 NHRA Mello Yello Drag Racing season off the efforts of his 3.899-second pass at 321.88 mph from Friday night. This is the first time since 2015 that Force has qualified No. 1 more than once in a season but it is his fifth No. 1 qualifier at the facility just outside of Richmond and 157th of his career. The 16-time Funny Car world champion will be looking to tally his fifth event win in Virginia, two of which came from the top spot including his most recent win in 2000.

“It’s good to be standing here. That car was really fast last year with Courtney (Force), 11 low qualifiers and four wins, including here, it was a good car, but there have been changes and we have to adapt so we can’t even look at the runs we made a year ago or two years ago,” Force said. “So, give credit to my daughter Courtney, it’s her car from last year, and give credit to Brian Corradi, Daniel Hood and the team, all the kids that make it happen. They gave me a good car.”

Force and the PEAK Coolant and Motor Oil / Herculiner team closed out the third qualifying session on Saturday with a 4.205-second pass at 237.92 mph after smoking the tires but would stay at the top of the pack heading into the final session. In his last pass of qualifying, the Funny Car legend ran the third quickest run of the session with a 3.978-second pass at 320.81 mph giving him a total of six bonus points throughout the two days of qualifying.

“We came out today and ran a .97 when it was pretty warm and it gave us a race day tune-up. So, we’re ready,” said Force who will race Jeff Diehl in the first round of eliminations. “Corradi and Danny, they’ll be ready tomorrow. I just have to sign autographs, take care of the fans and the sponsors and try to stay cool and calm and get out there and drive my car. Reaction times are off for everybody, and I’m really terrible, so I have a lot of work to do tomorrow if I’m going to get 150 but I’m sure going to try. That’s why I come here. You don’t need to get all of that in your head, though. If it comes it’ll come and it will.”

Sitting second in the Mello Yello points standings, Brittany Force enters race day in the No. 3 qualifier position off the efforts of her 3.772-second pass at 319.98 mph Friday night. It will be the second time this season that she’ll start race day from the No. 3 qualifier, a spot where she’s won two of her nine career tour victories from. The 2017 Top Fuel world champion and her Advance Auto Parts team got things started on Saturday with a 4.857-second pass at 147.86 mph after shaking the tires but headed into the last session still sitting No. 3. For their final qualifying effort, Force and the Advance Auto Parts team improved on the day to put a 3.874-second pass at 314.24 mph on the board locking in her No. 3 spot. She’ll face Audrey Worm in the first round of eliminations on Sunday.

“So, we ran good in that last session. The track is hot and everyone is struggling a little out there but we made a decent run and got down there,” said Force. “I’m feeling confident going into tomorrow. We pair up with Audrey Worm and I’m hoping for a long race day. Courtney won this race last year with Advance Auto Parts so we’d like to do the same thing again, make a little history and get Advance back in that winner’s circle.”

Looking to get a Wally for the first time at Virginia Motorsports Park, Robert Hight and the Automobile Club of Southern California Chevy Camaro SS team continued their qualifying efforts on Saturday with a 4.513-second pass at 191.32 mph after shaking the tires and shutting off early. The team would improve later in the afternoon to run a 4.062-second pass at 313.44 mph that would lock in the No. 5 spot. The two-time Funny Car world champion has started from the No. 5 spot one other time this season in Houston and ended the weekend in the Spring Nationals winner’s circle. Hight will look to do the same in Virginia by first getting past rival Cruz Pedregon during round one on Sunday.

“Conditions were tricky out there today. It was hot and the track was greasy but we did our best to keep things consistent and held onto that No. 5 qualifier,” said Hight, who is looking to get his fourth win of the season. “I’ve started race day from this position before and came out with a Wally so I’m not worried about tomorrow. We should have pretty similar conditions as we did today, I think it will be a little hotter but you know, we’ll get this thing down there and hopefully get in the winner’s circle.”

Rookie of the Year candidate, Austin Prock and the Montana Brand / Rocky Mountain Twist team had two clean passes during Saturday’s qualifying. Prock started the day with a 3.882-second pass at 318.24 mph and would keep up the consistency in the final session with a 3.888-second pass at 310.70 mph. From the No. 10 spot he’ll face Richie Crampton in the first round of eliminations.

“Overall, it’s been a good start with my new crew chief, Mike Green. We made some good passes in the .80s. The track has been really hot and greasy. That last run we ran .88 but we had a hole out from about 330-feet to the finish line so that definitely slowed us down and we could have easily run a low 3.80 with that run,” said Prock, who is sitting inside the top 10 of the NHRA Mello Yello points standings. “If we get this thing to run on all eight tomorrow, I think we can be a contender and be able to go some rounds. I’m looking at the ladder right now and I think we can by lot of these guys if we just play our cards right and if I leave the starting line good tomorrow. I’m looking forward to it and hopefully we can have a career best weekend for Montana Brand / Rocky Mountain Twist and our new crew chief and Ronnie Thompson.”