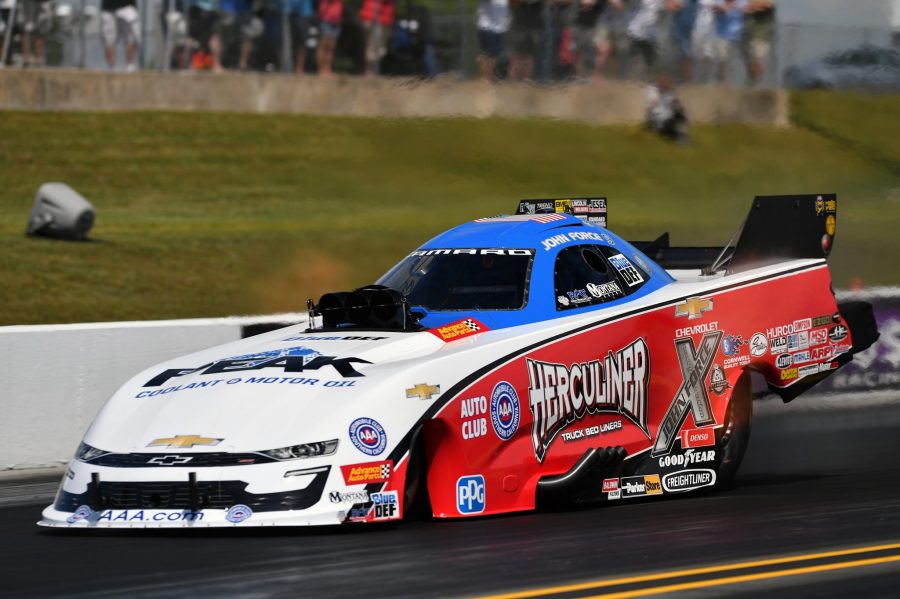 DINWIDDIE, Va. (May 17, 2019) — John Force powered his PEAK Coolant and Motor Oil / Herculiner Chevy Camaro SS Funny Car to the top of the field with two consistent passes Friday at the Virginia NHRA Nationals. Daughter, Brittany Force is No. 3 with Advance Auto Parts in Top Fuel, team President Robert Hight and the Auto Club team sit in the No. 5 position and rookie Austin Prock is No. 10 in his Montana Brand / Rocky Mountain Twist dragster.

Coming into the weekend sitting third in the points standings, sixteen-time Funny Car world champion, John Force opened qualifying with a 3.971-second pass at 323.27 mph in his PEAK Coolant and Motor Oil / Herculiner Camaro to be second quickest of the session and earn two bonus points. Force’s performance continued with his second pass of the day, laying down a track elapsed time record 3.899-second pass at 321.88 mph to take over the top spot and claim three additional bonus points.

“I won the inaugural here so I’m excited to be back at Richmond. We ran good today and I’m learning everyday how to race against these guys,” said Force, who is chasing his second No. 1 of the season and 157th of his career. “I got a good team so I got to thank my daughter Courtney Force for that, I’m driving her car with her team. I’ve got Herculiner on the car this weekend. That’s an Old-World Industry car and they own all those brands, PEAK and BlueDEF. It’s exciting and something different. Brittany is doing good with Advance, Robert with Auto Club and Austin in that Montana Brand dragster and everybody is racing, everybody is safe and that’s why I stay in this sport, I want to be a part of all these kids and watch them.”

Brittany Force and the Advance Auto Parts team kept in line with her father staying consistent during both passes running in the .70’s. Her first pass of 3.781-seconds and at 313.07 mph put her in the No. 7 position. Force would make the jump into third with her second session run of 3.772 at 319.98, the second quickest run of the field and good enough for two bonus points.

“Good start to our weekend. In Q2 we ended up No. 3 running a 3.77, picked up some bonus points. Obviously, we wanted to go after that No. 1, that’s what David Grubnic and Mac Savage are always looking for, but we had a goal to be in the top five and we are,” Force said. “We get two more tomorrow and this Advance Auto Parts team will be going after it and looking to get ready for race day. Conditions will be similar to what we’ll see on Sunday so hopefully we’ll get two quality passes.”

After losing traction and shutting off early, Robert Hight and the Automobile Club of Southern California Chevrolet Camaro SS Funny Car team closed out session one with a 4.338-second pass at 207.43 mph. They came back in the second session to run a 3.967-second pass at 326.32 mph, improving their positioning from No. 9 to No. 5.

“We didn’t run like we wanted to today but we ran a .96 in the second session and moved up to No. 5 so that’s good,” said Hight. “We’ll be looking to get better tomorrow. I have no doubt that this Auto Club team with Jimmy Prock and Chris Cunningham will be ready to go rounds on Sunday. We’ll get to work on the race day tune-up. We’ll figure this track out so I’m confident we can get it done.”

Like his teammate, Austin Prock and the Montana Brand / Rocky Mountain Twist Top Fuel dragster team shut off early after smoking the tires in session one to run a 5.916-second pass at 113.72. In the second qualifying session, Prock improved to a 3.824-second pass at 324.83 mph to jump seven spots to No. 10 despite dropping a cylinder down track.

“Good start this weekend in Richmond. Got a new crew chief, Mike Green, got a few new crew members added to the Montana Brand / Rocky Mountain Twist team too and we changed a handful of things coming into this weekend so it’s a total restart,” Prock said. “We were a little fast early on that first run and we smoked the tires but they dialed her in and made some changes. Everything listened and everything functioned properly in the second session. I think they’re happy with it. We didn’t really know what it was going to do down track and it did drop a cylinder down there that slowed us down a bit. All in all, a good day. I’m excited to see what the future holds with Mike Green and I think we’re headed in the right direction.”

Qualifying at the Virginia NHRA Nationals continues Saturday with sessions at 1:30 p.m. and 4:30 p.m. Eliminations are scheduled for Sunday at 12:00 p.m.