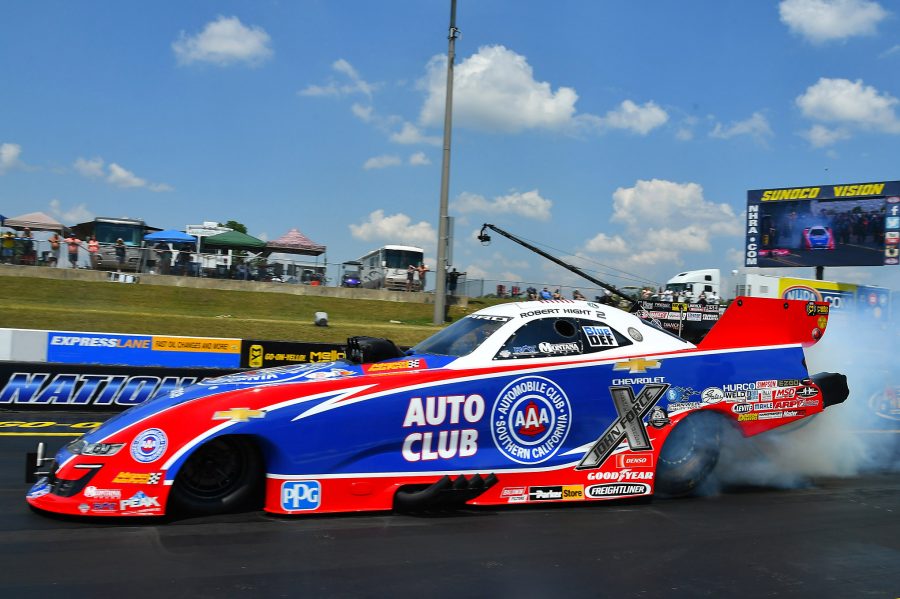 DINWIDDIE, Va. (May 19, 2019) — Robert Hight and the Auto Club of Southern California Chevrolet Camaro leave the Virginia NHRA Nationals with a solid hold on the NHRA Mello Yello Drag Racing Series points standings. John Force will head into the next race fifth in points while Brittany Force holds onto the No. 2 spot in Top Fuel and Austin Prock rounds out the top 10.

It was a driver’s battle for Robert Hight and rival Ron Capps in the second round of eliminations. Both championship veteran drivers had to pedal their 11,000 horsepower machines to the finish line after immediately going up in smoke in unison at the starting line. Hight made his way to a 6.204-second pass at 270.75 mph but Capps, the eventual event winner, managed to get to the finish first with a 6.173 at 251.11. Hight had defeated Cruz Pedregon in the first round when he had a 4.013-second run at 316.97 mph that bettered Pedregon’s 4.057 at 304.74.

“Not the result we wanted today. We’ll keep the points lead but we were hoping to go a couple more rounds and get the win,” said Hight who has yet to relinquish the points lead this season. “This Auto Club team will be fine. We learned a lot this weekend. Jimmy Prock and Chris Cunningham, they’ll be ready for that four-in-a-row we have coming up. Track conditions were tricky with temperatures we haven’t seen since last summer in Bristol but now we have some data for these hot races that are coming up through the summer.”

Brittany Force had to put her driving skills to the test during the first and second round of eliminations on Sunday. With track temperatures reaching upwards of 130 degrees, Force pedalded her Advance Auto parts dragster to a first-round win against Audrey Worm. Force ran 4.321-seconds at 241.89 mph while Worm finished with a 4.561 at 181.54. Force would make her second-round exit to three-time world champion Antron Brown after they both hazed the tires early. Brown would recover quicker and have a 4.446-second pass at 231.00 mph to Force’s 4.659 at 234.53.

“It was a tough race track with temperatures around 140 degrees. Everyone struggled to get down there. We had to pedal it both rounds and we snuck passed that first round but got beat by Antron in the second round,” Force explained. “The most important thing is we stay two in points and we would have stayed no matter the final results of the race. We’ll just have to go after the next one.”

“Again, that 150 is still eluding me but it will come. The car is fast but we got into hot conditions. I’m glad we just got to see the heat of four cars, they all got past first round. Robert with the Automobile Club car, Brittany and Advance Auto Parts and Austin with his new crew chief Mike Green and the Montana Brand / Rocky Mountain Twist dragster,” said Force. “This weekend I was blue and red with Herculiner. We’re headed to Chicago now. That’s the big one with PEAK, it’s where their headquarters are. That’s the one we gotta win. Let’s get there and win it.”

In the first round of eliminations, Austin Prock powered his Montana Brand / Rocky Mountain Twist dragster to a 3.866-second pass at 304.94 mph to better Richie Crampton’s 3.901 at 313.51. Making his fourth quarterfinal appearance of the season, the rookie driver had the starting line advantage but hazed the tires forcing him to pedal his hot rod to a 4.294-second pass at 228.61 mph falling short to Mike Salinas and his 3.831 at 321.50, which was the quickest run of race day.

“Overall, great first weekend with my new crew chief Mike Green. We had a really competitive run first round and got the win. I felt confident going into the second round. It was tricky track conditions so I feel like we made a lot of progress in the right direction and we’ll keep building on it, get after it in Chicago,” said Prock, who is sitting inside the top 10 in the NHRA Mello Yello points standings. “I’m having fun, Mike’s having fun, Thompson always has a good time so I got a good crew behind me, bunch of new guys but they’re all gelling well and doing a great job so I’m excited with how this weekend went. Obviously, we wanted to go a bit further but we’ll keep digging.”

The John Force Racing team will head to Joliet, Ill. May 30-June 2 for the Route 66 NHRA Nationals at Route 66 Raceway, the ninth event on the NHRA Mello Yello Drag Racing Series Season schedule.