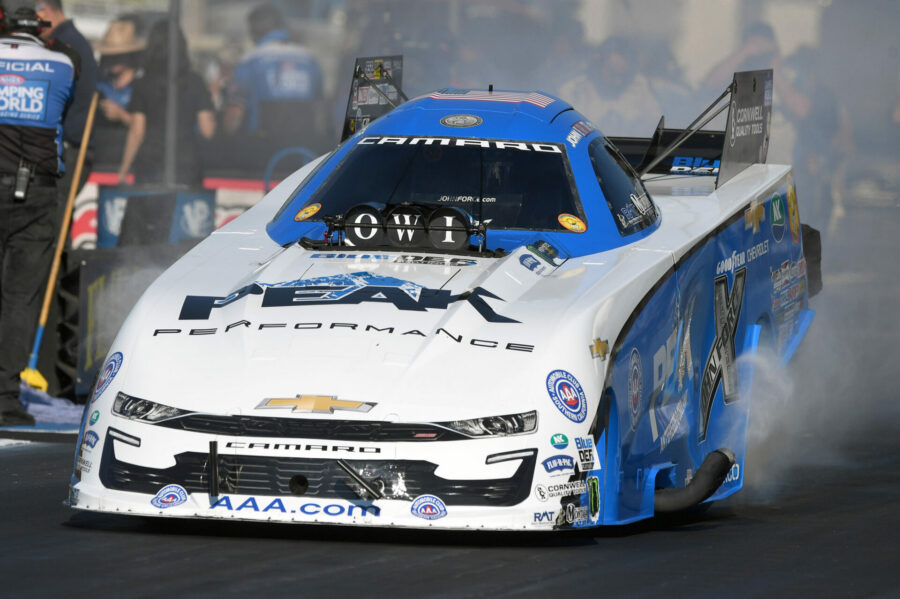 TOPEKA, Kan. (Aug. 09, 2022) – John Force and the PEAK Antifreeze and Coolant Chevrolet Camaro SS team have held steady to fourth in the NHRA Camping World Drag Racing Series points standings. They head to this weekend’s Menards NHRA Nationals at Heartland Motorsports Park to defend their victory from last year and add to Force’s legacy at the facility.

“A lot of great memories in Kansas, a lot of history. Topeka, Heartland Motorsports Park, has been good to me. Hoping this year we can get out there and get the job done again in this PEAK Chevrolet,” Force said. “We’ve been running really well. Danny Hood, Tim Fabrisi and all these guys, they’ve been working really hard and given me a fast race car. Just have to keep at it and I’ll doing my job and it’ll happen; this PEAK Chevy will be back in the winners circle before we know it.”

Off the efforts of a No. 1 qualifying position and victory at the Four-Wide Nationals at zMAX Dragway in Charlotte and more recently a runner-up finish at Sonoma Raceway, Force is on the cusp of clinching his spot in the Countdown to the Championship, NHRA’s six race playoffs, and a run at his 17th series championship.

Competition at the Menards NHRA Nationals at Heartland Motorsports Park begins with qualifying on Friday at 7:30 p.m. and Saturday at 3:00 and 6:00 p.m. with eliminations Sunday at 10:30 a.m. Television coverage of the event will begin with qualifying on Saturday at 4:30 p.m. ET and Sunday at 1 p.m. ET on FOX Sports 1 (FS1). For eliminations, the broadcast will switch to FOX Broadcasting Network on Sunday at 2 p.m. ET.