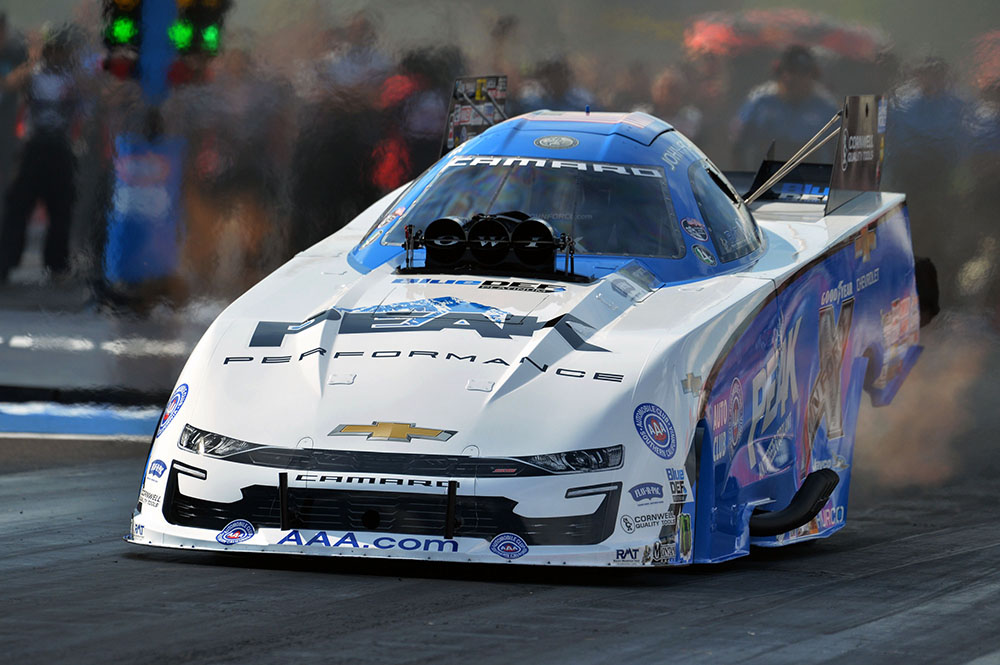 READING, Pa. (Sept. 08, 2021) – John Force and the PEAK Antifreeze and Coolant Chevrolet Camaro SS team enter the NHRA Countdown to the Championship, the NHRA Camping World Drag Racing Series’ seven race playoffs, sitting second in the standings, only 20 points out of the championship lead. This weekend at the Mopar Express Lane NHRA Nationals at Maple Grove Raceway, Force will try to overtake that points gap en route to his 17th championship season.

Force and his Daniel Hood and Tim Fabrisi led PEAK Antifreeze team now have three wins this season (Charlotte Four-Wide, New England Nationals and the event in Topeka at Heartland Motorsports Park where he shared the winners circle with daughter Brittany Force for the first time), 162 No. 1 qualifying positions (he earned top spots with Brittany at the Charlotte Four-Wide and the most recent event at the U.S. Nationals). This weekend, for the 14th time in his career, Force is trying to win his fourth race in a season.

“It’s the time when you get that fire in your belly, it’s the Countdown, the final stretch,” said Force who is one of only five pro drivers who have qualified for every Countdown, a total of 14. “I’m proud of what this PEAK Chevy team has done so far. Danny Hood, Tim Fabrisi, all these young guys, they’ve worked hard and we’re hoping to make it pay off in the end.”

“I love coming out to Reading and Maple Grove Raceway. The fans, the setting, it’s great,” Force said. “Kicking off the Countdown, being up there in points, No. 2, we’re going after it. I’ve still got a lot of fight in me. I’m ready, my team is ready. I love this, it’s going to be a fun ride and I’m ready to get started.”