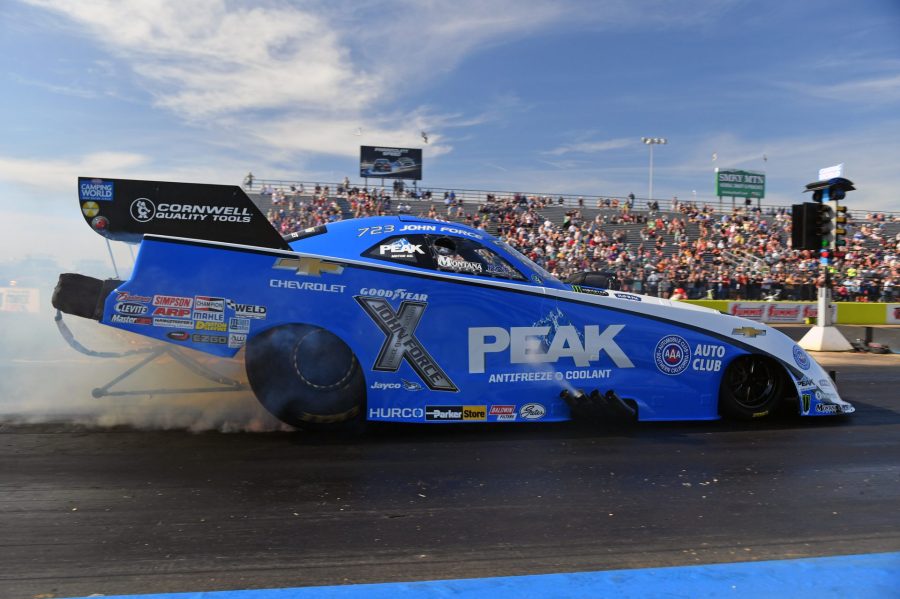 BRISTOL, Tenn. (Oct. 13, 2021) – With only three races left in the NHRA Camping World Drag Racing Series Countdown to the Championship, John Force and the PEAK Antifreeze and Coolant Chevrolet Camaro SS team will be taking advantage of every opportunity to close their 115 points gap with the Funny Car leader at this weekend’s NHRA Thunder Valley Nationals at Bristol Dragway.

The PEAK Chevy team have kept their chances for a 17th championship alive with five final round appearances that included three wins first at the Charlotte Four-Wide, then New England Nationals and sharing the winners circle with daughter Brittany in Topeka at Heartland Motorsports Park and three No. 1 qualifying positions (Charlotte Four-Wide, U.S. Nationals and Carolina Nationals). A win at Bristol Dragway will not only keep them in the championship conversation but could extend to 14th the number of seasons Force has won at least four races.

“A bit of bad luck in Dallas. But we still went some rounds and the way things shook out on race day were okay for us,” said Force referring to Ron Capps beating points leader Matt Hagan in the finals. “We’ve had a good race car all season long, I’ve changed some things just to end up changing them back, I know I’ve probably driven Danny Hood and Tim Fabrisi and Joe Barlam a little mad but we’re in it. We’re in the fight because they’ve give me a good hot rod and because I’ve held on and tried to do my job. Just have to keep on doing it.”

“Bristol is special, it usually falls on Father’s Day weekend and that’s something I enjoy because I have my girls out here racing with me, first Ashley, then Courtney and now Brittany. It truly is Thunder Valley. The fans are great and I’m looking forward to seeing it all in fall,” Force said. “Having an extra race in the Countdown, well it depends where you’re at, could help some, could hurt others, I’m hoping we’re on the helping side. We’re going to stay focused, go some rounds and hopefully get this PEAK Chevy in the winners circle.”

Qualifying at the NRHA Thunder Valley Nationals at Bristol Dragway begins Friday with the first session at 5:30 p.m. and continues Saturday with sessions at 1 p.m. and 4 p.m. Eliminations are slated for Sunday at 11:30 a.m. Television coverage of the weekend starts with the first qualifying show Friday night at 7 p.m. and continues with a second qualifying show Sunday at 1 p.m. followed by the finals at 2 p.m. ET all on FOX Sports 1 (FS1).