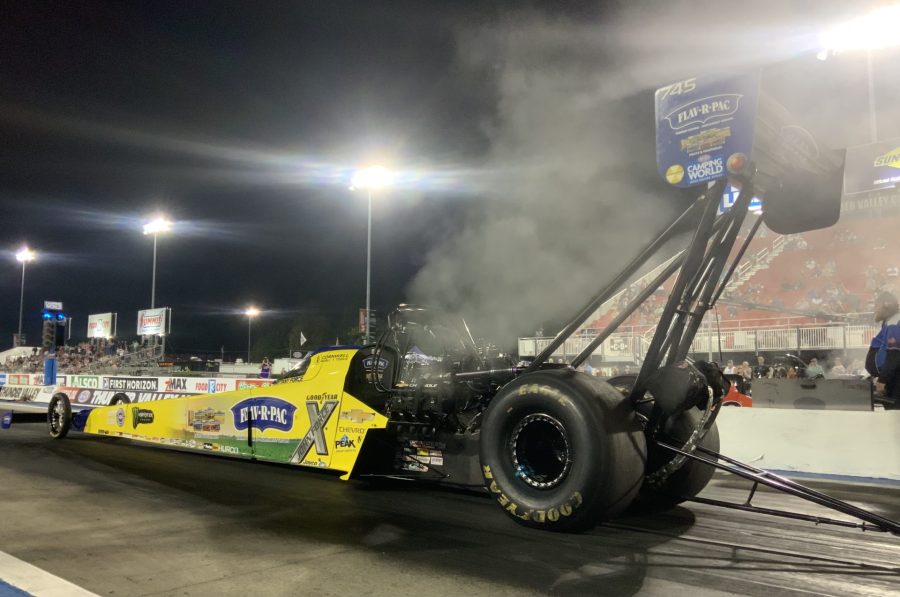 BRISTOL, Tenn. (Oct. 15, 2021) – Brittany Force and the Flav-R-Pac dragster team are sitting in the provisional No. 1 spot Friday night at the NHRA Thunder Valley Nationals at Bristol Dragway. Robert Hight with the Automobile Club of Southern California and John Force with the PEAK Antifreeze and Coolant Chevrolet Camaros are currently sitting No. 2 and 3, respectively, in Funny Car.

After delays due to issues with the timing, Brittany Force and the David Grubnic and Mac Savage led Flav-R-Pac team found themselves making their first qualifying pass under the lights at Thunder Valley. Sitting No. 2 in points, the 2017 world champion would run in the final pair of nitro cars. The Flav-R-Pac team took full advantage laying down a track record 3.682-second pass at 328.94 mph.

“We definitely made a few changes in that downtime, but I try to stay out of it, it gets my head in the wrong place and I start worrying about thins so I leave that to the team and David Grubnic and Mac Savage. They did a fantastic job with whatever adjustments they did make with the sun going down and the track cooling down,” said Force said Force who has set five elapsed time and six speed track records this season. “We made it down there. I wasn’t sure if she was going to make, it was moving around and it felt like it was going to let go but we made it to that finish line.”

Robert Hight and the Auto Club Chevy team built on some of the consistency found last weekend with a solid 3.968-second run at 323.50 mph, the top speed of the session. Their efforts put them No. 2 and gave them an extra two bonus points.

“Good way to start the weekend out here in Bristol. There was probably more out there but it’s going to be cooler conditions tomorrow with the rain, hopefully we get both those runs in,” Hight said. “Just taking it one run at a time, making sure we’re getting down the track and having some fun while we do it. Getting a clean run like that, that’s what this Auto Club team knows how to do, and we just have to keep on building on it.”

John Force and the PEAK Chevy were in the groove for the full pass clocking a 3.968-second run at 322.73 mph to be third quickest and earn one bonus point.

“Pretty good start to the weekend out here in Thunder Valley. Getting the PEAK Chevy from A to B, picked up a bonus point. We’ll take it,” Force said. “There’s supposed to be some weather tomorrow, but we should get something in, be good for race day when it’s supposed to be real cool. We’ll see how it goes.”

Qualifying at the NRHA Thunder Valley Nationals at Bristol Dragway continues Saturday with sessions at 1 p.m. and 4 p.m. Eliminations are slated for Sunday at 11:30 a.m. Television coverage continues with a second qualifying show Sunday at 1 p.m. followed by the finals at 2 p.m. ET all on FOX Sports 1 (FS1).