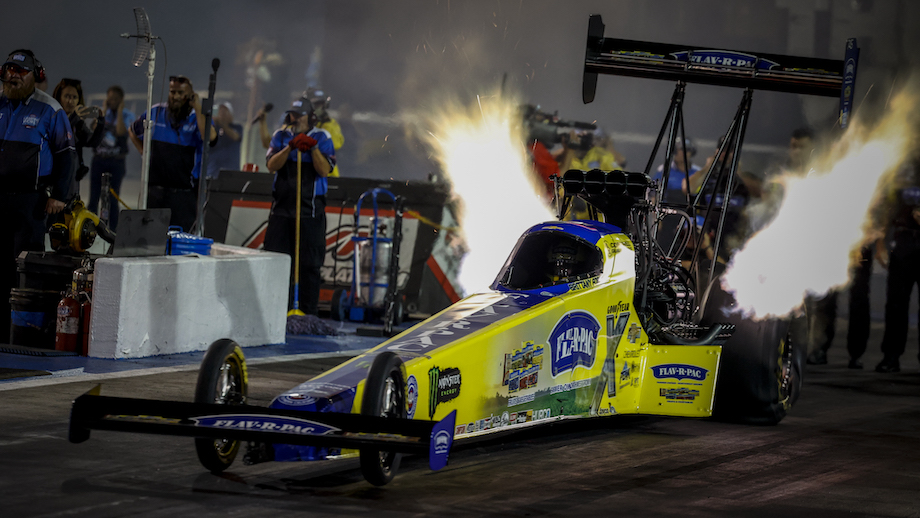 BRISTOL, Tenn. (Oct. 16, 2021) – Despite morning showers, John Force Racing teams had the opportunity to take advantage of both qualifying runs on Saturday at the NHRA Thunder Valley Nationals at Bristol Dragway. Brittany Force and the Flav-R-Pac dragster team land in the No. 3 spot while setting the track speed record. Robert Hight and the Automobile Club of Southern California Chevrolet Camaro are No. 5 and John Force and the PEAK Antifreeze and Coolant Chevy are No. 6.

The second qualifying session was a bit of awash for the John Force Racing hot rods, all three cars drove into tire smoke before mid-track. First up was Brittany Force and the Flav-R-Pac dragster who recorded a 6.480-second run at 91.36 mph. Force was followed by father John Force and the PEAK Chevy who went 8.160-seconds at 77.85 mph and then Robert Hight and the Auto Club Camaro went 6.390 at 102.74.

Brittany Force and the Flav-R-Pac team found improvement in the final qualifying session. Force would handle her Top Fuel dragster to a 3.672-second pass at a track record 333.58 mph. The rest of the category would also make some moves through the two qualifying sessions, shifting her into the No. 3 qualifying position to race Lex Joon in the first round.

“Overall good qualifying. Two solid passes for this Flav-R-Pac / Monster Energy team. We have a great ladder tomorrow,” Force said. “Looking to go out and win Thunder Valley and put Flav-R-Pac in the winners circle. We want to end on a high note since this is the last time this season we’ll be representing Flav-R-Pac as our primary sponsor.”

Qualified No. 3 and No. 4 coming into the Saturday evening session, Robert Hight and John Force would line up side-by-side. Both Chevy’s would go up in smoke at the same time with the Auto Club Camaro crossing the finish line at 8.247-seconds and 84.04 mph and the PEAK Camaro recording an 8.404-second run at 77.75 mph.

Hight and the Auto Club Chevy Camaro, who land No. 5 with their 3.968-second pass at 323.50 mph from Friday night, will line-up with Cory Lee in the first round of eliminations on Sunday.

“Not the day we wanted. It’s a real tight race track and that’s what we’re going to see tomorrow too, so we really wanted to get down the track,” Hight said. “We’re not used to racing here in October, not having the heat of summer is helpful and hopefully we got some good data from our early numbers. This Auto Club team, Jimmy Prock, Chris Cunningham, we’ll be ready tomorrow.”

Sitting No. 6 off the efforts of their 3.968-second pass at 322.73 mph, Force and the PEAK Chevy Camaro will take on Jim Campbell in the first round.

“Well, we’re in it. It’s going to be cool tomorrow so all these runs would have been helpful. But we have that one run from Friday night, and we’ll be in the fight tomorrow,” Force said. “This PEAK Chevy team are working hard.”

Eliminations at the NRHA Thunder Valley Nationals at Bristol Dragway are slated for Sunday at 11:30 a.m. Television coverage continues with a second qualifying show Sunday at 1 p.m. followed by the finals at 2 p.m. ET all on FOX Sports 1 (FS1).