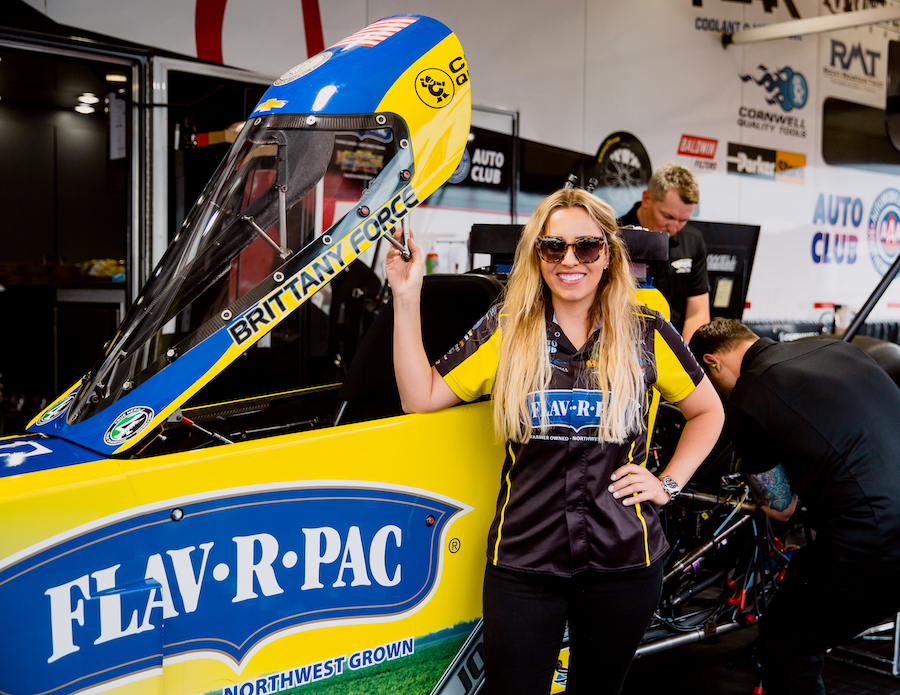 BRISTOL, Tenn. (Oct. 17, 2021) – Brittany Force with the Flav-R-Pac dragster and Robert Hight with the Automobile Club of Southern California Chevrolet Camaro SS Funny Car raced into the semifinals Sunday at the NHRA Thunder Valley Nationals at Bristol Dragway. John Force and the PEAK Antifreeze and Coolant Chevy Camaro had a second-round finish.

Coming into race day in the No. 3 qualifying spot after setting the track speed record on Saturday, Brittany Force and the Flav-R-Pac team first competed with Lex Joon. Force would win the round but have a massive explosion near the finish officials assume caused the timing system to trip leaving her without a valid time. Second round would put Force against Spencer Massey. The Flav-R-Pac dragster would run 3.671-seconds at 332.10 mph with another smaller explosion down track but their efforts would still defeat Massey’s 3.777 at 320.13. In the semifinals Force and the Flav-R-Pac team would run into tire smoke early to go only 8.209-seconds at 79.25 mph falling to eventual race winner Mike Salinas and his 3.698 at 330.55.

“I was really proud to be running this Flav-R-Pac car at my favorite race on the circuit, the Thunder Valley Nationals. Overall, happy with our semifinal finish. We made some good passes all weekend long starting Friday night,” said Force who is still second in points. “We had a few issues going rounds today and the boys had a lot of work, but they pulled it together and got us up to that starting line. This Flav-R-Pac / Monster Energy team stayed two in points and we’re looking forward to getting to Vegas, the second to last race of the season.”

“We qualified well this weekend. We put up some good runs, thought we had a competitive Chevy,” Hight said. “We got out run today, wish things were different but we’re still out here to win. There’s two races left in the season, and we’ll be out there just like everyone else looking for wins.”

John Force and the PEAK Chevy started race day off facing Jim Campbell in the first round. Force would lay down a 3.997-second pass at 272.12 mph despite having to shut off early and take the win over Campbell who drove into tire smoke for only an 8.069 run at 77.10. The second round put Force against 2018 world champion J.R. Todd. The PEAK Camaro would run into trouble to run only 4.118-seconds at 324.59 mph and be bettered by Todd’s 3.916 at 328.78. Force will head into the final two races of the season sitting tied for fourth in the championship points standings.

“Not what we were looking for today. Bit of a rough go through the whole weekend,” said Force who is now tied for fourth in points. “We’re still in the hunt though. Two races left, points and a half in Pomona, we’ll be good, this PEAK Chevy team, we still have some fight in us.”

The Dodge SRT // Nationals, the second to last event in the 2021 NHRA Camping World Drag Racing Series season, kicks off Oct. 29-31 at The Strip at Las Vegas Motor Speedway.