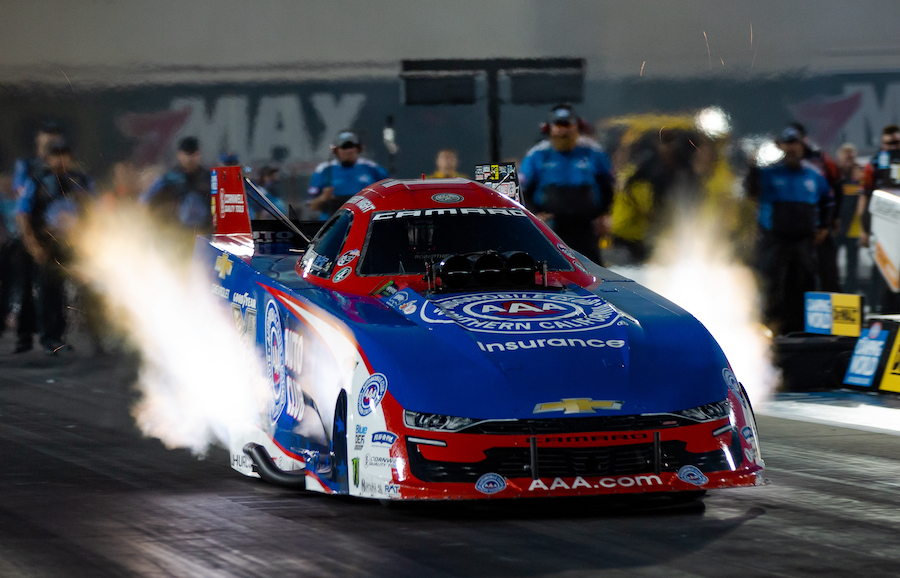 Hight and his Auto Club team are coming off a No. 1 qualifying position that earned them an extra $15,000 at the Texas Motorplex’s Stampede of Speed at the NHRA FallNaitonals last weekend. It was there second No. 1 of the season, the first was at the Las Vegas Four-Wide event. Seventh in the Funny Car points standings, the Auto Club Chevy has two victories in 2021 at the SpringNationals in Houston and Sonoma Raceway’s NHRA Sonoma Nationals as well as two runner-up finishes at the season opening Gatornationals and the New England Nationals. Pressure has been high for the championship team and consistency has been hard to find. They’ll look to change that this weekend.

“There was a lot of pressure, we put a lot of pressure on ourselves. This Auto Club team, we’re used to being up there in qualifying, going rounds on race day, and when we weren’t doing that consistently, we got really hard on ourselves,” Hight said. “You know, there’s still a chance we could pull off a fourth championship this year, but we need to take it one run at a time, one round win at a time. We know how to race, how to win, Jimmy Prock and Chris Cunningham, all these Auto Club guys, we can put it all together and get wins and have fun doing it.”

Success at Bristol Dragway would be big for Hight and the Auto Club team not only in their championship hunt but for their overall statistics at the facility. It is one of only two tacks in the series (the other is Richmond) where Hight has yet to qualify No. 1. He does have one win at the Thunder Valley Nationals back in 2011 when he entered race day from the No. 6 spot.

“We normally race at Bristol Dragway in June for Father’s Day. I always liked it because I’d have Autumn with me. I’m glad we are still getting the race in, having it in the Countdown adds a bit of excitement, maybe a bit of hope, especially with the Auto Club Finals having points and a half,” Hight said. “Weather is supposed to be cool so it should be exciting, should have some quick times and big speeds. We’ll just see what happens.”

Qualifying at the NRHA Thunder Valley Nationals at Bristol Dragway begins Friday with the first session at 5:30 p.m. and continues Saturday with sessions at 1 p.m. and 4 p.m. Eliminations are slated for Sunday at 11:30 a.m. Television coverage of the weekend starts with the first qualifying show Friday night at 7 p.m. and continues with a second qualifying show Sunday at 1 p.m. followed by the finals at 2 p.m. ET all on FOX Sports 1 (FS1).