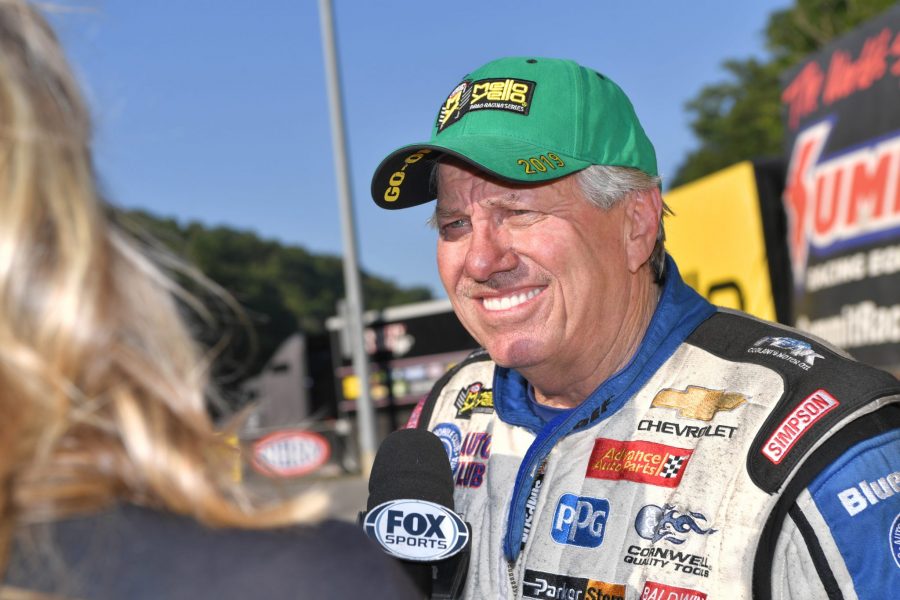 BRISTOL, Tenn. (June 15, 2019) — John Force, driver of the PEAK Coolant and Motor Oil / BlueDEF Chevrolet Camaro SS, held onto the No. 1 qualifier spot Saturday at the NHRA Thunder Valley Nationals at Bristol Dragway. It is Force’s second No. 1 at the facility and 158th of his 43-year career. It is the third No. 1 of the 2019 NHRA Mello Yello Drag Racing Series campaign for Force and marks his most top qualifying positions in a season since 2014 when he earned six.

After running his 3.911-second pass at 326.95 mph on Friday night to enter the day already at the No. 1 spot, Force and the PEAK Coolant and Motor Oil / BlueDEF team had two consistent runs on Saturday. To open the day, Force had a 4.001-second pass at 325.77 mph to be quickest of the session and followed the effort up with a 4.026 run at 319.14 mph in the final qualifying session. The performance of the PEAK Coolant and Motor Oil / BlueDEF team earned themselves a bye run in the first round of the 15 car field, only Force seventh of his career.

“It’s nice to get this for Father’s Day. My car is coming around, it’s fast and I’m coming around, but I have a lot of work to do in the cockpit. Brian Corradi and Danny Hood, they did their job and we’ll go out there tomorrow and see what it’ll do,” said Force. “I have a single for that first run so that gives me a chance to test the car and see if we can win some rounds and get in the ball game, get that win. It would be great if both Brittany and I could win tomorrow, but it would be great if Robert or Prock won, as long as we get some wins for our sponsors with PEAK, Auto Club, Advance Auto Parts and Montana Brand / Rocky Mountain Twist. I’m in the game and feeling good.”

Funny Car points leader, Robert Hight will start race day at Bristol Dragway in the No. 6 spot off his 3.998-second pass at 318.99 mph from Friday. Hight wasn’t able to improve through qualifying on Saturday running only 6.241-seconds at 106.40 mph in the third session and 5.657-seconds at 124.45 mph in the fourth and final session. The Auto Club of Southern California Chevy Camaro was up in smoke early on both runs. Hight’s No. 6 starting spot puts him against rival Cruz Pedregon in round one.

“We smoked the tires in both qualifying sessions today, so it obviously isn’t what we planned but we’re sitting in the middle of the field in No. 6 and we’ll be ready to come out tomorrow and get after it,” said Hight. “It was hot today and track conditions were tricky and its going to be similar weather tomorrow, so now we have an idea of what to be ready for. Tomorrow is Father’s Day too and Autumn is here with me so I’d like to share that winner’s circle with her too.”

Rookie of the Year candidate, Austin Prock powered his Mike Green and Ronnie Thompson tuned Montana Brand / Rocky Mountain Twist dragster to 3.866-seconds at 318.17 mph in the third qualifying session. He kept things consistent in his final run to put up a 3.868-second pass at 315.64 mph. He’ll start race day from No. 6 off his 3.783-second pass at 325.92 mph pass from Friday and race Clay Millican.

“We made a solid effort in qualifying, made four respectable runs and that was our goal this weekend. We wanted to gather as much data as we could. This place can be tricky but I think we showed that we’re here to win,” said Prock. “I’m looking forward to tomorrow. I’d love to be hoisting that golden Wally tomorrow. What a Father’s Day present that would be for my Dad.”

“Not a bad start for this Advance Auto Parts team, we ended up seventh and we’ll get to race Dom Lagana first round. It should be a good race day; we’ll be ready to go some rounds. It’s Father’s Day weekend and we’re looking for a win and to double up with my dad,” Force said. “Part of my gift to him this year was getting his Brute Force logo painted on my helmet, I just started wearing it this weekend and surprised him with it. To be able to double up with him is on my bucket list and would be something special, especially on Father’s Day.”

Eliminations at the NHRA Thunder Valley Nationals at Bristol Dragway are set to begin Sunday at 12 p.m. Catch the action on FOX Sports 1 (FS1) at 2:00 p.m. ET.