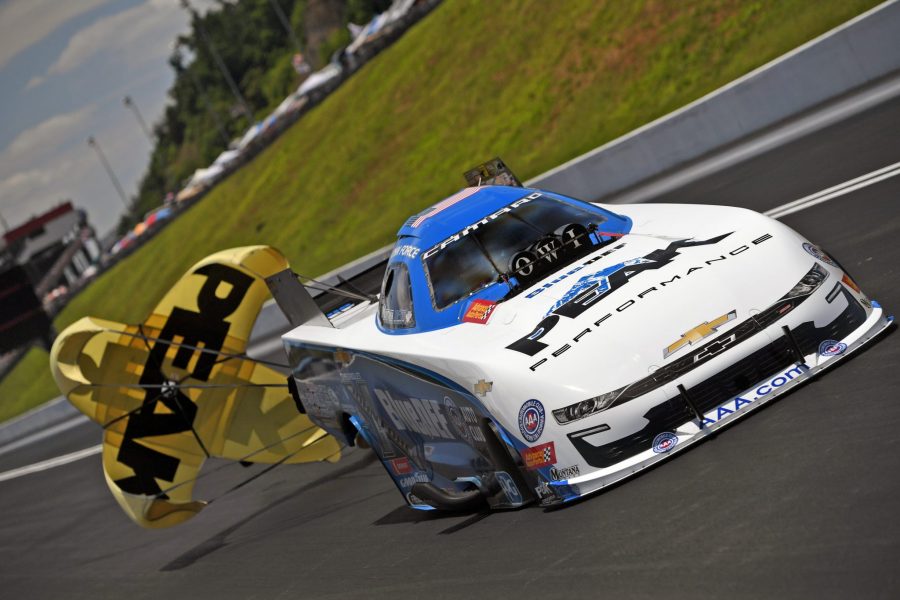 BRISTOL, Tenn. (June 16, 2019) — Sixteen-time Funny Car world champion, John Force and the PEAK Coolant and Motor Oil / BlueDEF Chevy Camaro SS team raced their way to a runner-up finish and moved to the No. 2 spot in the NHRA Mello Yello points standings on Sunday at the NHRA Thunder Valley Nationals at Bristol Dragway. It was the driving legends first final round appearance of the 2019 NHRA season, 254th of his career and sixth at the facility. Robert Hight and the Auto Club team stay in the points lead after a second-round exit and both Top Fuel drivers, Brittany Force and the Advance Auto Parts team and Austin Prock with Montana Brand / Rocky Mountain Twist, finished race day in the first round.

Starting race day leading the Funny Car class, John Force came into the first round of eliminations on a bye pass where he put down a 3.998-second run at 321.65 mph in his PEAK Coolant and Motor Oil / BlueDEF Chevy Camaro SS before heading to the quarterfinals. He kept up the performance consistency in the second round to take the win light over Tommy Johnson Jr. Force powered his hot rod to 4.044-seconds and 318.32 mph to Johnson Jr.’s 8.529 at 88.42 after he went up in smoke.

In his seventh semi-finals appearance of the season Force never trailed for the win against Jack Beckman. The driving legend had a clean 4.125-second pass at 316.38 mph to advance to the finals over Beckman’s 7.532-second pass at 97.47 mph.

Making his first final round appearance since his win at the Mile-High Nationals at Denver in 2018, Force and the PEAK BlueDEF team ran into issues following the burnout. Force had trouble getting the PEAK Chevy to reverse and then, once it did, getting the 11,000-horsepower machine to get back forward. They eventually staged and made it down the track but trailed from the start. Force would make a 4.155-second pass at 287.05 mph while Tasca would run 4.008 at 316.23 for the win.

“No Father’s Day for me, didn’t get that win. I feel a lot better about my race car being competitive. We’ve moved up to No. 2 in the points, that’s some good news,” said Force who made his 254th final appearance. “I’ve got confidence, not just in my car, my car has always been good, (crew chiefs) Brian Corradi and Danny Hood and (car chief) Tim Fabrisi, but I have confidence in me. We had an issue up there and that happens but I’ve had to make a lot of changes myself. I’ve found out a lot of stuff. Not just with the car. I’ve been going to doctors, got special glasses, working on eating habits, got to get off that sugar, it drops ya. I’ve said it before, I’m in the game. That win is coming.”

Entering race day from the No. 6 qualifying position, points leader Robert Hight matched with veteran racer Cruz Pedregon in the first round of eliminations. Hight improved his record against Pedregon to 32-15 with a 4.020-second pass at 322.19 mph in his Auto Club of Southern California Chevrolet Camaro that bettered Cruz’s 4.077 at 298.21. Hight would line up with longtime rival to John Force Racing, Bob Tasca III in the second round. After a pedalfest to the finish line, Hight would fall short with a 4.337-second pass at 303.03 mph to the 4.221 at 309.49 mph from the eventual race winner.

“Not the Father’s Day weekend we were looking for with this Auto Club Chevy Camaro. Not worried, we’re still in the points lead and with Jimmy Prock and Chris Cunningham, there’s nothing to worry about,” Hight said. “We’re getting ready for the summer, the warmer races that we know are coming. They know this car so well. We’ll get it together and when we do, we’ll be hard to stop.”

Third-generation driver, Austin Prock and the Montana Brand / Rocky Mountain Twist dragster team had an early exit Sunday when they went head-to-head with Clay Millican in a pedalfest to the finish line after both dragsters smoked the tires. Prock’s 4.759-second pass at 242.76 mph wasn’t enough to get past Millican’s 4.331 at 251.16 but he’ll stay ninth in the NHRA Mello Yello points standings.

“Overall, it was still a good weekend. We missed the track this morning and smoked the tires, losing first round. But first time we made four consecutive runs where a lot of people struggled in qualifying, so that’s a positive out of the weekend,” said Prock. “We’ll take that and keep building off it for Norwalk and hopefully go some rounds.”

Like teammate Austin Prock, Brittany Force and the Advance Auto Parts team also exited in round one after losing traction and pedaling to the finish line. Force ran a 4.092-second pass at 271.79 mph but was bettered by Dom Lagana’s 3.820 at 321.65.

“It’s been a tough few weeks for us. We’ve been struggling in the heat and coming into these hotter racetracks, we can’t seem to find our steps. But I put all my faith in this Advance Auto Parts team, David Grubnic and Mac Savage.” said Force. “I know we’ll be back; we’re just in a little rut right now so we’re going to test tomorrow and see what we can get done. We’ll figure it out when we need to and that’s in the Countdown.”