JOHN FORCE AND PEAK SIT NO. 1 FRIDAY AT THE NHRA THUNDER VALLEY NATIONALS 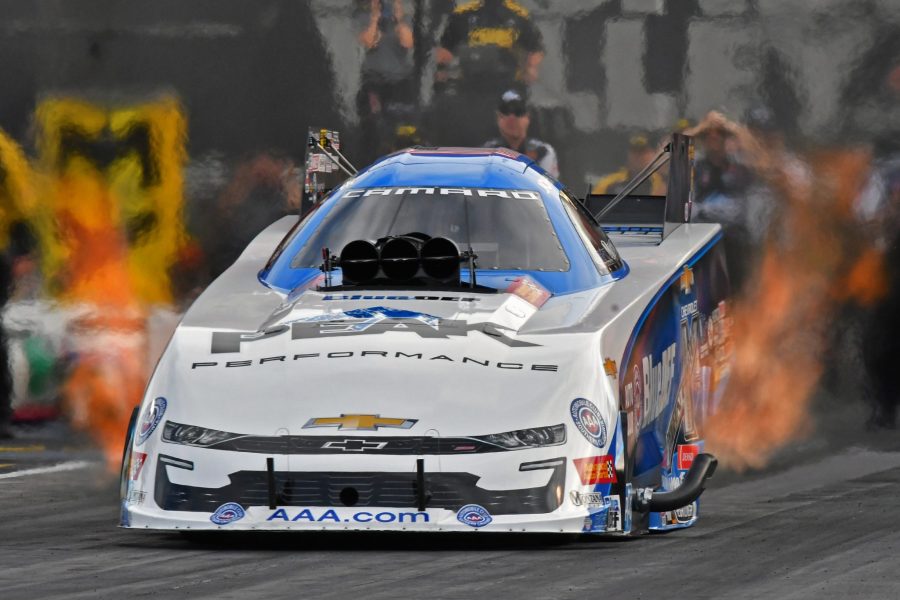 BRISTOL, Tenn. (June 14, 2019) — Sixteen-time Funny Car world champion John Force put his PEAK Coolant and Motor Oil Chevrolet Camaro SS in the No. 1 spot Friday night under the lights at the NHRA Thunder Valley Nationals at Bristol Dragway. Teammate Robert Hight and the Automobile Club of Southern California team are sitting in the No. 6 spot, and in Top Fuel, rookie Austin Prock is also sixth with Montana Brand / Rocky Mountain Twist and Brittany Force is currently No. 7 with Advance Auto Parts.

On the hunt for his 150th NHRA Mello Yello career win, John Force started Friday’s qualifying with a 4.575-second pass at 180.94 mph after hazing the tires and shutting off early. Coming into the night session sitting in the No. 11 spot, the driving legend laid down a solid 3.911-second pass at 326.95 mph in his PEAK Coolant and Motor Oil Chevy Camaro to finish the day leading the Funny Car class.

“It feels really good to be No. 1. Walking and praying, and hoping to make it and to feel that moment again just for a moment, and to hear that cheer of the crowd, you know, you’d think I’d be over it but I’m not. I still love it,” said Force, who is after his third No. 1 start of the season. “My people, the team, really makes it happen and I’m just along for the ride. I have to give them credit. Those kids love me. When I really fail, they’re all over me trying to protect me. That’s what you need, that comradery, and that’s what I have.”

Robert Hight and the Auto Club Chevy Camaro SS team closed out the first qualifying session with a 3.998-second pass at 318.99 mph to sit No. 1 spot heading into the night session. In his second pass, Hight had trouble down track and smoked the tires to run a 7.305-second pass at 88.55 mph. He’ll start Saturday qualifying from the No. 6 position.

“I’m excited to be out here at Bristol Dragway on this Father’s Day weekend. These are a little bit different conditions than we’re used to seeing here in June but everybody is in the same boat,” said Hight. “We ran well in that first pass, picked up three bonus points as the quickest of the session. I know Jimmy Prock and Chris Cunningham were pushing this Auto Club Chevy to get after it in the second session and we just overpowered the track. We’ll come out tomorrow and be ready for Sunday, we’re always ready.”

First-year driver Austin Prock made a clean 3.882-second run at 317.12 mph for his first career qualifying pass at Bristol Dragway. In Friday’s second session under the lights, Prock and the Montana Brand / Rocky Mountain Twist team improved to 3.783-seconds and 325.92 mph and end the day in the No. 6 spot.

“Day one of qualifying went excellent. The goal for this Montana Brand / Rocky Mountain Twist team is to make four clean passes in qualifying and build as much data as we can for Sunday. I think we had a great start to that today,” said Prock. “We ran 3.88 the first run that put us seventh and then ran a 3.78 in the second session that put us sixth to end the day. A good qualifying effort for the first time here at Bristol Dragway. We’re going to keep picking at it and make sure we go down the track twice tomorrow and have a great plan for Sunday.”

In her first qualifying pass, Brittany Force and the Advance Auto Parts team had a solid 3.790-second pass at 325.45 mph that earned them three bonus points as quickest of the session. Heading into ideal conditions for her second qualifying pass, the David Grubnic and Mac Savage tuned dragster overpower the track and went up in smoke to run 6.155-seconds at 104.69 mph. She’ll start Saturday’s qualifying sitting in the No. 7 spot.

“It was a good start for this Advance Auto Parts team out here at Bristol Dragway. We were No. 1 for a while with that 3.79 run in the first session. Unfortunately, we pushed too hard on the second run and overpowered the track and we got pushed down to No. 7,” said Force. “We have two more runs tomorrow, two more chances to get down the track and get something together for Sunday. I’m feeling good about this weekend.”

Qualifying at the NHRA Thunder Valley Nationals at Bristol Dragway continues Saturday with sessions at 1 p.m. and 4 p.m. Catch the action at 10:30 p.m. ET on FOX Sports 1 (FS1). Eliminations will take place Sunday at noon with TV coverage at 2 p.m. ET on FS1.