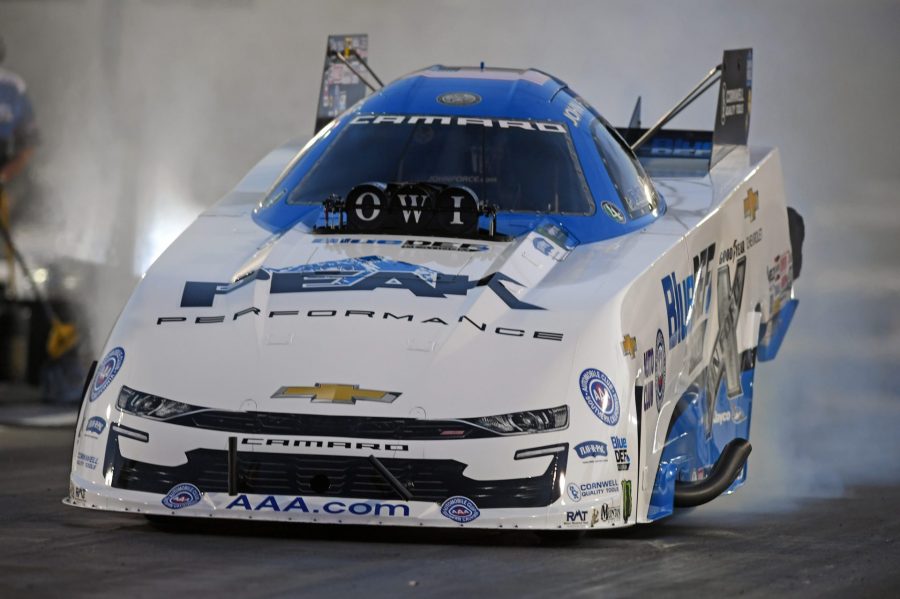 BAYTOWN, Texas (May 19, 2021) – Coming off not only a win but a string of promising performances to open the NHRA Camping World Drag Racing Series season, John Force and the PEAK / BlueDEF PLATINUM Chevrolet Camaro team show no signs of letting up as they enter the Mopar Express Lane NHRA SpringNationals at Houston Raceway Park May 21-23, the fifth event of the 2021 season.

In the first four events of the NHRA Camping World Drag Racing Series schedule, Force and his Daniel Hood and Tim Fabrisi led PEAK / BlueDEF team had steadily worked their way to victory starting with a quarterfinal finish at the hands of teammate Robert Hight at the season opening Gatornationals. At the first four-wide event of 2021 at The Strip at Las Vegas Motor Speedway, Force would qualify No. 2 only behind Hight and at the NHRA Southern Nationals at Atlanta Dragway, Force and his PEAK / BlueDEF team would make their 257th final round appearance finishing runner-up. At the most recent event, the NHRA Four Wide-Nationals at zMAX Dragway just outside of Charlotte, N.C., Force earned his 161st No. 1 qualifying position before continuing his dominance into race day and coming out with his 152nd national event victory.

“I’m excited, we’re off to a great start. I’ve got some luck on my side, heck I’m lucky to have a job. I’ve got a good team around me, Daniel Hood, Tim Fabrisi and all these young guys, they’re all working together,” Force said. “After last year, I’m never going to take the job I love for granted, or the people. We’re here, we’re racing well, I’ve got a good car thanks to my team and we’re competing with these tough kids out here. My team is doing their job and I’m halfway doing mine, give me a good car and we’re going to win some races. We’re doing just that.”

Force has a record seven wins at Houston Raceway Park. His seventh win is historic in that it was the 100th victory of his career. The now 152-time winner has recorded 10 No. 1 qualifying positions at the facility, the most recent coming in 2019 when he raced his way to the semifinals before falling to teammate and eventual race winner Robert Hight. Son-in-law / crew chief Danny Hood currently holds Houston Raceway Park’s ET record from when he led Courtney Force to a 3.851-second run in 2017.

“Houston has treated John Force Racing well. I’ve had some wins there so has Robert Hight in that Auto Club Chevy and Brittany with Monster Energy,” said Force referencing the 16 professional wins at the SpringNationals for John Force Racing, a number that equals the most at any single event for the team. “I’ve got something good going with this PEAK / BlueDEF team and we’re going to keep it going. Take care of business during qualifying and set us up right for race day to go rounds and hopefully get in that winners circle again.”