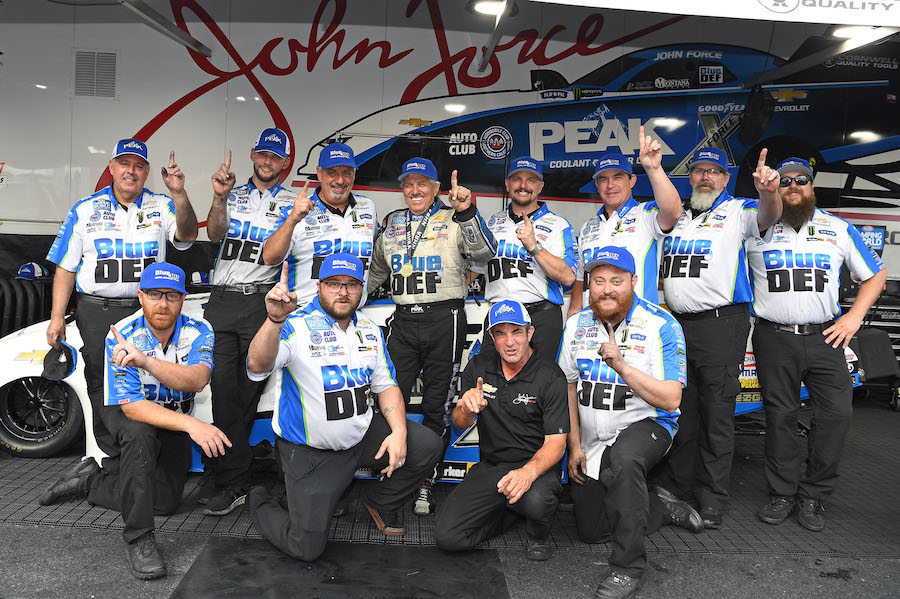 CONCORD, N.C. (May 16, 2021) – John Force and the PEAK / BlueDEF PLATINUM Chevrolet Camaro team stole the show at the NGK NTK NHRA Four-Wide Nationals. For the 152nd time Force was the Funny Car victor on Sunday. Brittany Force and the Flav-R-Pac team nearly joined her father in the winner’s circle ending a successful weekend with her 14th runner-up finish. Robert Hight and the Automobile Club of Southern California team had an early exit in the first quad.

After earning his 161st No. 1 qualifying position, John Force and the PEAK / BlueDEF PLATINUM team didn’t skip a beat in their first quad running a 3.926-second pass at 329.10 mph to defeat Dale Creasy Jr., Mike McIntire and Dave Richards. McIntire moved onto the second round with Force where they battled against J.R. Todd and Terry Haddock. Laying down the quickest pass of the event at 3.897-seconds and 330.31 mph, Force, along with Todd, would move onto the final round to run against Alexis DeJoria and Cruz Pedregon.

In Force’s 258th career final round appearance he would continue his consistency to handle his PEAK / BlueDEF hot rod to a 3.916-second pass at 328.78 mph handing J.R. Todd the runner-up finish at 3.944 and 327.82. The victory marks Force’s 152nd career win and his second at the zMAX Dragway four-wide event, his first coming at the inaugural four-wide race in 2010.

“I ran my mouth and said I could win this for (track owner) Bruton (Smith). I really wanted to and it was in my heart. He’s done so much for me – things people don’t even know – to keep my head in the game. I dedicated this trophy to him. (Crew chief) Danny (Hood) is getting one, so is (co-crew chief) Tim Fabrisi,” said Force who is now third in points. “Danny, he’s picked up this PEAK / Blue DEF Chevy race car. And now he’s all into it. He’s got a good team around him. They’re all working together. After last year, I’m never going to take the job I love for granted, or the people. We’re back here. These kids are tough out there. The car was prepared right by my young team and I halfway did my job. I’m excited. I’m lucky, I have a job. I didn’t have a job last year and it was painful. Sometimes things just work right for me. I won the inaugural, and my mindset (today) was to do it again.”

Opening race day from the No. 1 position for the 22nd time in her career, Brittany Force and the Flav-R-Pac team continued in their record setting ways when they blasted to a 3.714-second pass at a track record 333.44 mph to win their first-round quad over Jim Morrison, Justin Ashley and Clay Millican. She’d be joined by Millican to face Josh Hart and Doug Kalitta in the second round.

Maintaining their high caliber performance, Force would handle the Flav-R-Pac dragster to a stout 3.735-second pass at 328.38 mph to win the second round sending her to the 24th final round of her career. Joined by Josh Hart, Steve Torrence and Antron Brown, Force would lay down another clean and solid pass a 3.723-seconds and 333.16 mph. The Flav-R-Pac team would just come up short to Steve Torrence’s 3.716 at 329.10.

“Great weekend for this Flav-R-Pac / Monster Energy team. We came out Friday Q1, set track record at 3.66 and stole that No. 1 spot. Then, going into Saturday, we struggled. We didn’t get down the racetrack and that was tough for this team. We had a run that was in the cold and the best track conditions and now we needed to reset for race day,” Force said. “David Grubnic and Mac Savage set up this race car and it ran killer runs all day. Consistent all day long. We ended up runner-up. We made it to a final; that’s huge for this team. I’m so proud of all my Flav-R-Pac guys and proud to be teamed up with David Grubnic.

“I struggled on the second run and just messed up on the Christmas Tree and was so in my head about it, and Grubnic pulled me aside and told me to stop messing with it, I’m overthinking it and go out and drive the car because I know how to do it and rip their throats out,” continued Force who moved up to third in points. “And that’s what we went out there doing. We brought everything to the line the best we could. Unfortunately, it wasn’t our day, but this will carry us into next weekend.”

Having not made a full pass in qualifying Robert Hight and the Automobile Club of Southern California team entered race day in the No. 15 spot with no lane choice to run against Alexis DeJoria, Bob Tasca III and Blake Alexander. Hight would come in third in his quad with a 4.351-second pass at 271.13 mph after smoking the tires mid track.

“We’ve had some issues, but we think we know what it is now. We’re going to stay and test tomorrow,” said Hight who sits ninth in points. “I’m not worried, this Auto Club team, Jimmy Prock, Chris Cunningham and all the guys, they’re working hard to figure this out and once we do, we’ll be hard to catch. We’ll make a couple of runs tomorrow and be ready for Houston next weekend.”