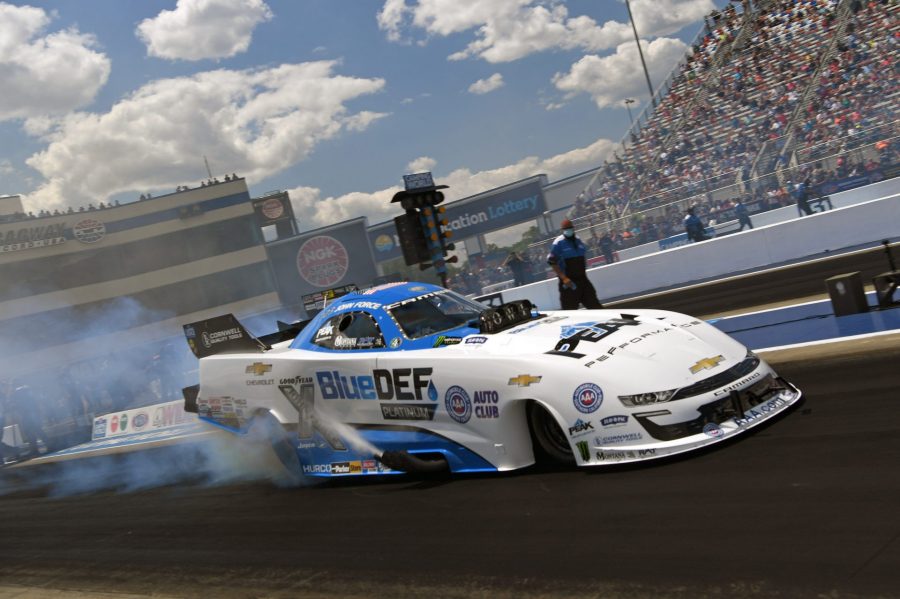 CONCORD, N.C. (May 15, 2021) – The father daughter duo of John and Brittany Force swept the nitro No. 1 qualifying positions for the third time in their careers. The Flav-R-Pac dragster secured it’s 22nd No. 1 while the PEAK / BlueDEF Platinum Chevrolet Camaro tallied it’s 161st at the NGK NTK NHRA Four-Wide Nationals at zMAX Dragway just outside of Charlotte, N.C. Robert Hight and the Automobile Club of Southern California Camaro rounded out qualifying in the No. 15 position.

In 2019, Brittany and John qualified No. 1 together at the SpringNationals in Houston and the Texas FallNationals in Dallas. At the Houston event, Brittany went on to win the race for the second consecutive year. As a team, the No. 1 qualifiers are the 337th and 338th for John Force Racing and the fifth and sixth at the NHRA Four-Wide at zMAX Dragway.

Entering the day from the No. 16 position after experiencing tire smoke right at the hit on Friday night, John Force powered his PEAK / BlueDEF Chevy to an impressive 3.904-second pass at 328.30 mph to start Saturday. With one qualifying run left, Force and the BlueDEF team continued to put on a show when they ran 3.902-seconds at 330.55 mph to solidify their No. 1 position.

“It’s exciting, I get to wear one of these hats here with Camping World, we’re with Jayco and they sell a lot of product there. Taking this PEAK BlueDEF Chevy to No. 1 with Brittany and Flav-R-Pac over there. It means a lot, being out here with her, I love my kids and my grandkids,” Force said. “Daniel Hood and Tim Fabrisi, these guys all make it happen for me, I’m just a shoe. We’ve been learning a lot and all the teams work together. Daniel Hood and Tim, they work really well together. We’ve struggled in the past, so, you know, runner up last event and then come out here low ET, that’s good for your feelings. Now you have to make it count tomorrow. They’re doing the job, I’m driving, give me a good car and I’ll win races. So, we’ll see where it goes.

For the 30th season in his career, Force will begin at least one National event from the No. 1 qualifying position. To kick of the day, Force will face off with Dale Creasy, Mike McIntire and Dave Richards.

Brittany Force and the Flav-R-Pac dragster team held onto their No. 1 position from their track record run Friday night under the lights. With header flames lit they went 3.662-seconds at 333.08 mph. On Saturday, the Flav-R-Pac team ran into tire smoke during both runs going 4.265-seconds at 194.91 mph in the first try and 5.711 at 111.58 in their final go before race day.

“Ending Saturday qualifying today we struggled a little bit. Looking at the big picture we went No. 1 with my dad, we’ve only done that two times. It’s exciting to have two No. 1 qualifiers in the John Fore Racing pits. Pumped on it,” Force said. “We’re going to have a tough day tomorrow. Even though we got that No. 1 spot, we didn’t get down the race track like we planned so we have a lot of work ahead of us.”

The work will begin for Force when she faces Jim Morrison, Justin Ashley and Clay Millican in the first round.

With room for improvement from Friday night, Hight and the Auto Club team did better their performance each pass on Saturday starting with a 5.828-second run at 118.15 mph that saw tire smoke near mid track and again running into tire smoke in their final pass of the day for a 5.413 run at 132.67 mph. Despite the numbers being slightly better, Hight would move to the No. 15 position.

“Tough weekend so far. I know Jimmy Prock and Chris Cunningham are working on it, trying some things out, so when this Auto Club car gets going, it’s going to be something to watch,” Hight said. “Same plan as always tomorrow, get down the track, go rounds and get to that winner’s circle.”

Hight will set the plan in motion by first taking on Alexis DeJoria, Bob Tasca III and Blake Alexander in his first round quad.