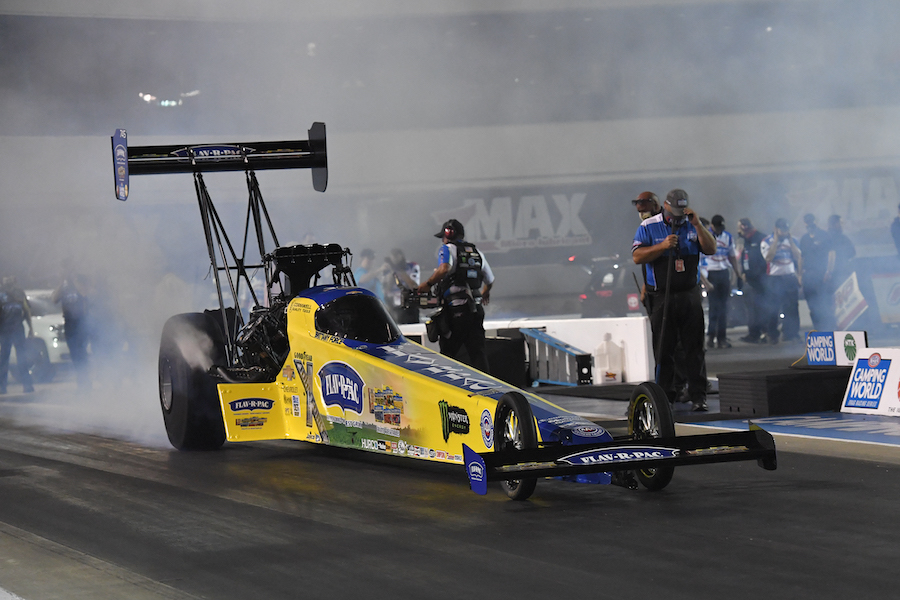 CONCORD, N.C. (May 14, 2021) – Brittany Force and her Flav-R-Pac Top Fuel dragster team made their presence known with a stellar run Friday night of the NGK NTK NHRA Four-Wide Nationals at zMAX Dragway to land in the provisional No. 1 qualifying position. Robert Hight and the Auto Club Chevy Camaro are currently No. 4 while John Force and the PEAK / BlueDEF Camaro are in the No. 16 spot with two qualifying sessions left.

Making quite the entrance, Brittany Force and her David Grubnic and Mac Savage led Flav-R-Pac dragster team set the track low elapsed time record when they blasted their way to a 3.662-second pass at 333.08 mph.

“I’m just pumped after a run like that. That’s a hell of a run,” Force said. “The four-wide race can be tough and tricky, and I just have to keep my focus. (Crew chief David) Grubnic said we were going to have a killer run, and Grubnic, Mac Savage and all of my guys, I’m just so proud of them.

“Now we can do what we want because we feel pretty safe, we’re locked in the show,” Force continued. “Now we can really push the car or play around with it and get us set up for race day. We’re locked in, we’re solid so it lets us relax a little bit tonight going into tomorrow. No matter how we run tomorrow we’ll be good to go for race day.”

The Funny Car category only saw one car make a full pass down the track. The John Force Racing Chevy Camaro Funny Cars were caught in the mix of tire smoke and shake due to challenging tack conditions. Robert Hight and the Auto Club of Southern California team managed to make it 60-feet before shaking the tires and coasting to a 7.366-second pass and land in the No. 4 position.

“Not what we were looking for but that’s why we have two more runs tomorrow,” Hight said. “Jimmy Prock and Chris Cunningham will get it worked out. That’s what they do. We’ll get what we need for race day and get the job done for Auto Club and Chevy and all our sponsors.”

John Force and the PEAK / BlueDEF Chevy team had trouble from the hit, going up in tire smoke at the starting line. They would eventually cross the finish line after 14.300 seconds. They’ll start Saturday from the No. 16 position.

“Well Brittany and Flav-R-Pac did well, got themselves in the top spot. Funny Cars had some issues. Tough night but it’s good to be here in Charlotte at zMAX with Bruton Smith,” Force said. “Weather looks good for tomorrow, we have two more chances, we’ll get in the show for PEAK and BlueDEF, Chevrolet, Cornwell Tools, ParkerStore and all our sponsors. Let’s see how tomorrow goes but I know we’ll be good.”

Qualifying at the NGK NTK NHRA Four-Wide Nationals at zMAX Dragway continues with two sessions on Saturday at 2 and 5:30 p.m. ET. Eliminations on Sunday will take place at noon ET. Television coverage for qualifying will be on FOX Sports 1 (FS1) beginning Saturday at 3 p.m. ET and continuing on Sunday at 11 a.m. ET. Live eliminations coverage will begin Sunday at noon on FOX Broadcasting Network.