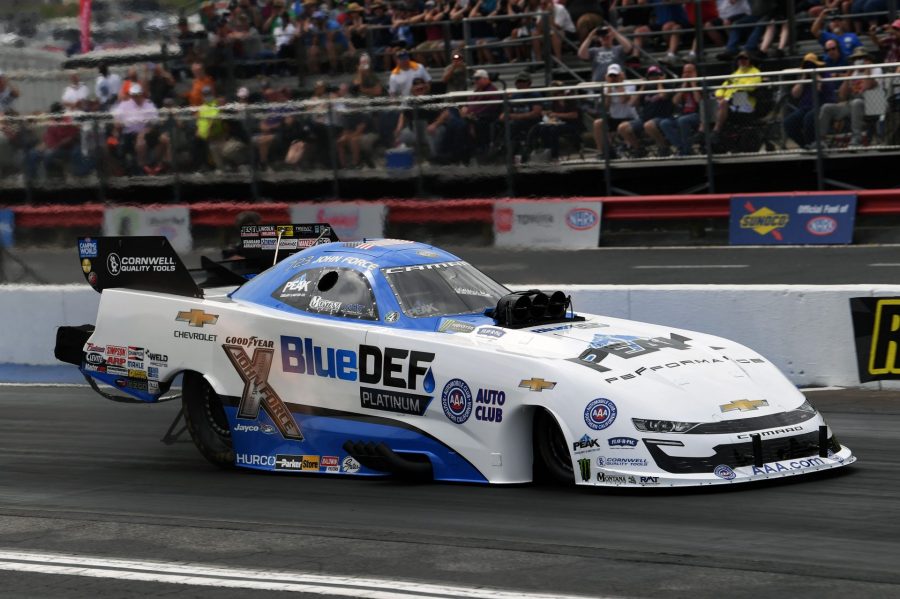 CONCORD, N.C. (May 12, 2021) – It’s been a steady climb to start the season for 16-time world champion John Force and his PEAK / BlueDEF PALTINUM Chevrolet Camaro SS team. Entering the NGK NTK NHRA Four-Wide Nationals, the fourth event on the Camping World Drag Racing Series schedule, Force is fourth in points, just two out from the top three, and poised for his first victory of the 2021 season.

Opening the season at the Gatornationals, Force was qualified in the fifth position and raced his way to the quarterfinals where teammate Robert Hight would end his weekend. At the first four-wide event of 2021 at The Strip at Las Vegas Motor Speedway, Force would qualify No. 2 only behind Hight. At the final NHRA Southern Nationals to be held at Atlanta Dragway, Force and his PEAK / BlueDEF team would make their 257th final round appearance. After qualifying only 11th, Force would battle his way past Cruz Pedregon, Ron Capps and J.R. Todd before finishing runner-up to Bob Tasca III in his 15th final round appearance at the facility.

“I’m proud of this team, of Daniel Hood and Tim Fabrisi. They’ve really got this PEAK / BlueDEF PLATINUM Chevy figured out,” Force said. “Because they have it figured out, now I have to do my job. I’ve got to keep working to stay in this game, keep improving. We all keep doing our jobs right we’re going to be looking pretty good the rest of the season, starting in Charlotte and zMAX Dragway, another beautiful Bruton Smith facility.”

Looking for his 152nd NHRA national event win, Force heads to zMAX Dragway with the inaugural four-wide win in 2010 under his belt. Force raced to the final quad in both 2018 and 2019, the last two years the race was ran, and in 2018 had the runner-up finish. Force also runnered-up in 2014 to Hight. In fact, in the 10 years the Four-Wide Nationals have been competed at zMAX, Force has been in the final quad five times.

“I won the inaugural Four-Wide in Charlotte, against my daughter Ashley. All of John Force Racing has done pretty well in North Carolina,” Force said. “This PEAK team with Chevrolet and Cornwell Tools and all my sponsors, we’re going to go out there and keep that up, qualify and win some rounds, hopefully take home the Wally. That’s the goal, the whole point, win some races for the sponsors that have stuck by me.”