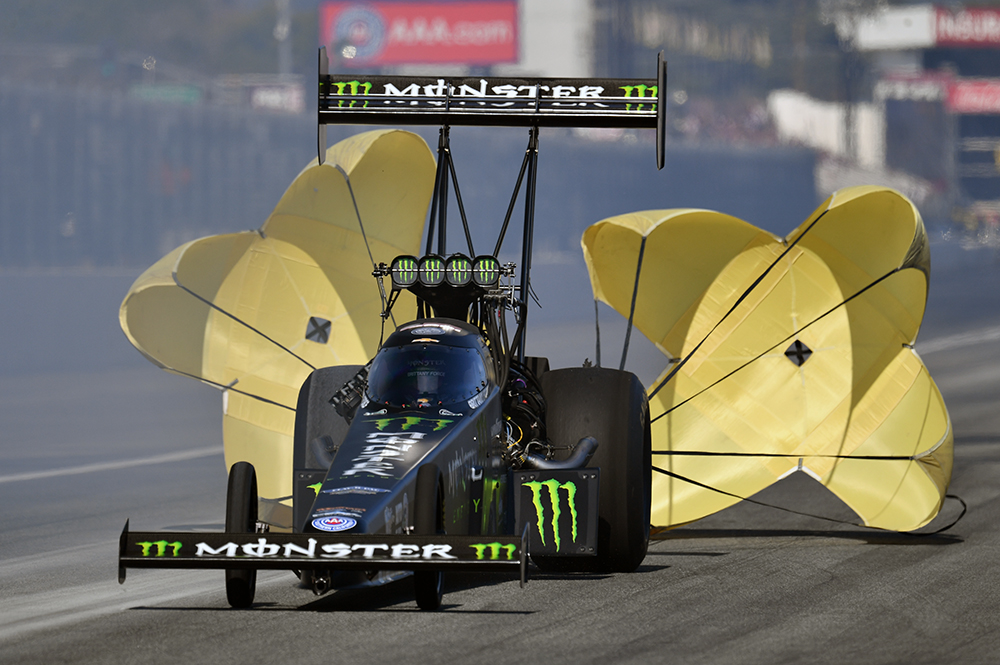 BAYTOWN, Texas (May 19, 2021) – After yet another successful weekend, the first win of the 2021 NHRA Camping World season for Brittany Force and the Monster Energy / Flav-R-Pac team sits just around the corner. There’s not a better place for them to start their winning ways than the Mopar Express Lane NHRA Spring Nationals at Houston Raceway Park, an event the 2017 world champion has truly dominated.

Led by crew chiefs David Grubnic and Mac Savage, Force and her team have opened the season garnering top speed at the Gatornationals, tallying the 21st and 22nd No. 1s of Force’s career at each of the Four-Wide events, Las Vegas and most recently Charlotte, and setting both ends of the track record at zMAX Dragway. Each of her No. 1s have been shared with Funny Car teammates, Robert Hight in Vegas and her father, John Force, in Charlotte.

“It’s been a good start to the season for this Monster Energy / Flav-R-Pac team. We’re just four races in and getting back in the groove of things after a whole season away,” said Force who sits third in the points standings. “This is the same team I had in 2019 and every single one of them returned. They stood by John Force Racing, and I think that speaks highly of their character, it shows how loyal they are and their commitment to John Force Racing. Our hard work is paying off but we want more, we’re looking for wins and ultimately to go after that championship.”

It would be fitting for Force’s first win of the season to come at Houston Raceway Park this weekend at the NHRA SpringNationals. Force has won her last two starts in Houston, 2018 and 2019 making it the only series event where she has won more than once. The 2018 victory was one of the biggest of her career because it was her first since four races previously when she crashed heavily at the Pomona Winternationals to start the season. Despite not racing at the facility in 2020, Force set both ends of the existing track records at 3.661-seconds and 332.18 mph in 2019 and her 10-4 record at Houston Raceway Park is her best at any track.

“We’ve had some luck over the years in Houston. We won back-to-back in 2018 and 2019. I’m ready to go from Charlotte right into Houston,” Force said. “These back-to-back races keep me as a driver, my crew chiefs and my whole team on our game. We made a lot of improvement in Charlotte and we’re looking to capitalize this weekend with a win.”