JOHN FORCE AND PEAK BLUEDEF CONTINUE THE HUNT FOR CHAMPIONSHIP NO. 17 AT THE NHRA CAROLINA NATIONALS 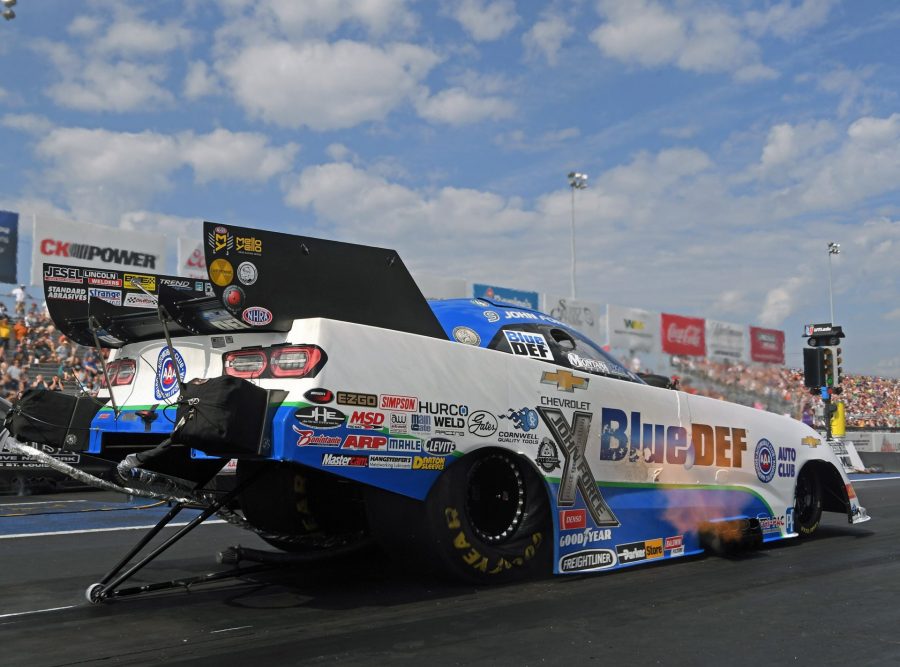 CONCORD, N.C. (Oct. 9, 2019) — Coming off a No. 1 qualifier and semifinal finish at the Midwest Nationals, sixteen-time Funny Car world champion John Force is making his way to zMAX Dragway this weekend for the NTK NHRA Carolina Nationals just 13 points shy of having his PEAK Coolant and Motor Oil BlueDEF Chevrolet Camaro at the top of the Funny Car leader board.

With four races left in the NHRA Mello Yello Countdown to the Championship, including this weekend’s Carolina Nationals, the odds of achieving an unprecedented 17th Funny Car title isn’t out of reach for the Hall of Fame team owner and driver.

In his 43rd season, Force has powered his PEAK Coolant and Motor Oil BlueDEF hot rod to the winner’s circle twice, has finished runner-up twice and has tallied four No. 1 qualifiers all of which have helped keep him top six in the points standings all season long. Now, at the halfway mark of the Countdown sitting in second behind regular season champion, teammate and protégé, Robert Hight, Force is hoping to continue the upward momentum of his ‘Old Blue’ Chevy Camaro team.

“I’m just proud of my PEAK BlueDEF team. It’s exciting to drive a car that’s this good. I have to give credit to my crew chiefs, Brian Corradi and Danny Hood, Tim Fabrisi and all these young kids. They’ve given me one of the best cars out here,” said Force. “We left St. Louis second in the points standings behind Robert and we’ll see what we got, see what happens when we get to Charlotte.”

At zMAX Dragway, a track on which he won the inaugural 4-Wide Nationals in 2010 and the fall event in 2016, will be chasing his 152nd career victory, third of the season and third at the facility. The world champ has also finished runner-up three times, twice at the spring event and once in the fall, and was the No. 1 qualifier at the spring race in 2011. At last year’s Carolina Nationals Force started race day from the No. 8 position and took his PEAK Chevy to the semifinal.

“We’re going to fight the fight this weekend in Charlotte. I’ve won there a couple of times so I’d like to get PEAK and all our sponsors back in the winner’s circle,” said Force. “We’re halfway in the Countdown so this race and every one after is going to be important. They’re all important. We want to stay up in the points and Robert, Brittany and the Prock kid want that too, so we’ll see how it goes.”