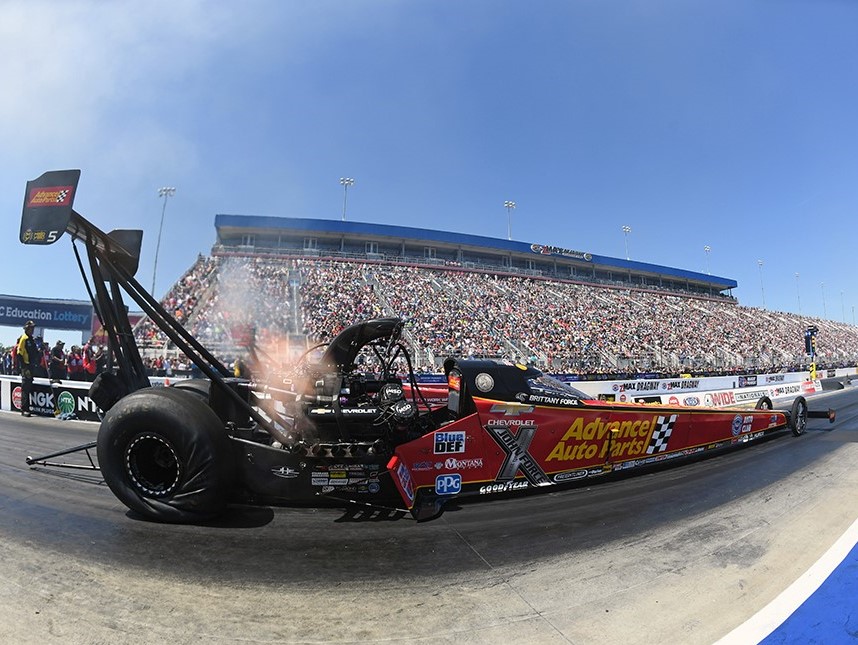 CONCORD, N.C. (Oct. 9, 2019) — The NTK NHRA Carolina Nationals will mark the halfway point of the NHRA Mello Yello Countdown to the Championship and, with only three events left once the weekend concludes, Brittany Force and the Advance Auto Parts team are more motivated than ever to get back in the winner’s circle as they battle for the Top Fuel championship crown.

This season the 2017 Top Fuel world champion has raced her way to two final rounds, taking home the Wally at the SpringNationals, has been to the semifinal three times and has collected seven No. 1 qualifiers. She’s also made NHRA history and set both track and national records. During qualifying at the Gatornationals, Force became the first woman since Shirley Muldowney in 1979 to clinch the top spot at the event. Then, at the SpringNationals, took the No. 1 qualifier with her father, John Force making them the first professional parent-child duo to be No. 1 in NHRA history.

Fast forward to NHRA’s biggest race of the year, the U.S. Nationals in Brownsburg, Ind., where she launched her dragster to a track elapsed time record of 3.645-seconds to be the first female Top Fuel driver to occupy the No. 1 position at the event. Then, two weeks later at the first race of the Countdown in Reading, Pa., Force continued to break records and pad the history books when she set the national elapsed time record with a stellar 3.623-second pass at 332.92 mph to become the first woman in 42 years to secure three consecutive No. 1 qualifiers.

“We have a good race car. David Grubnic, Mac Savage and all the Advance Auto Parts boys are moving this thing in the right direction and I’m confident we’ll get this thing back in the winner’s circle soon,” said Force. “We had a tough weekend at the last event in St. Louis but we’re standing in the No. 4 position in the Countdown. We have four races left and three after this next one in Charlotte, so we need to stay on top of it.”

Force makes her way to zMAX Dragway with history on her side. At the spring event, she picked up the yellow hat to be the first female to win in the four-wide format in 2016 and in 2018 she claimed the No. 1 qualifier spot alongside sister Courtney Force. At last year’s Carolina Nationals, Force powered her way to the No. 1 spot and finished runner-up.

“This Advance Auto Parts team is excited to get to Charlotte this weekend. We’re anxious and we want to win this thing and move towards that No. 1 spot,” said Force. “We were so close last year, qualified No. 1 and went to the final so I’m going in with that motivation to get back in the winner’s circle this time around.”