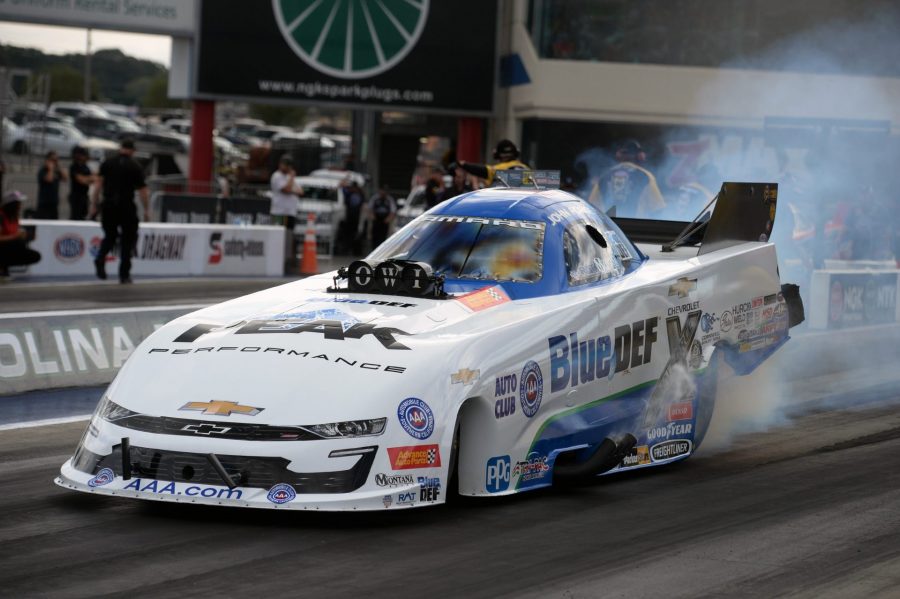 ENNIS, Texas (Oct. 16, 2019) — A win for John Force and the PEAK Coolant and Motor Oil / BlueDEF Chevrolet Camaro SS team at this year’s AAA Texas NHRA FallNationals at Texas Motorplex would not only further improve their battle for the championship, but it would put a storybook ending on a particularly traumatic life experience.

Hoisting the Wally trophy at the Motorplex has been one of Force’s bucket list items ever since he crashed twelve years ago while racing against Kenny Bernstein in a second-round match-up on Sept. 23, 2007. He was flown out of the Texas Motorplex by air ambulance and although he suffered injuries to his hands, legs and feet that required six hours of reconstructive surgery, confined him to a Dallas hospital for 30 days and required months of physical therapy, the sport’s biggest winner, who was initially told he would never walk on his own again let alone race, was back in competition the following February and back in the winners’ circle on June 1, 2008 at Topeka, Kan.

Since the 2007 Dallas crash, Force has added his first two championships in the Countdown Era, the 15th and 16th of his storied career, won the world’s biggest drag race, the Chevrolet Performance U.S. Nationals, for a fifth time, won his record 150th tour event (and 151st, as well) and been inducted into both the Motorsports Hall of Fame of America and the International Motorsports Hall of Fame. He hasn’t, however, won in the great state of Texas at either the Houston SpringNationals, where this season he was No. 1 qualifier alongside daughter Brittany Force, or the AAA Texas FallNationals.

He’s been close, especially at the Motorplex where he reached the final round in both 2010 and 2013. But in drag racing, a sport in which tens of thousandths of a second can be the difference between victory and defeat, close doesn’t count.

From 1990 until 2007, Force owned the Motorplex, taking a car to the final round 13 times, winning seven titles and compiling a 59-14 record, numbers that resulted in his 2011 induction into the Texas Motorsports Hall of Fame at Texas Motor Speedway.

Now, at age 70, Force is back to try again at the wheel of a Brian Corradi and Dan Hood tuned Camaro in which he is starting the FallNationals third in driver points, just 79 points behind points leader, teammate and protégé Robert Hight.

“Racing is what I love to do,” Force said. “I’m trying to fight the old man (in me) every day. You know, I started hearing, ‘you’re 70, this thing is over,’ and it’s really true what they say, it’s how bad you want it.

“When I get in that car, I’m alive again,” continued Force. “It’s like my heart starts working and everything is good. So, don’t let anybody tell you that you’re too old. Get up and stay alive and keep moving.

“Someday I’ve got to go out that door,” he admitted, “but before I do, I’d like to win at the Motorplex and maybe win another championship.”