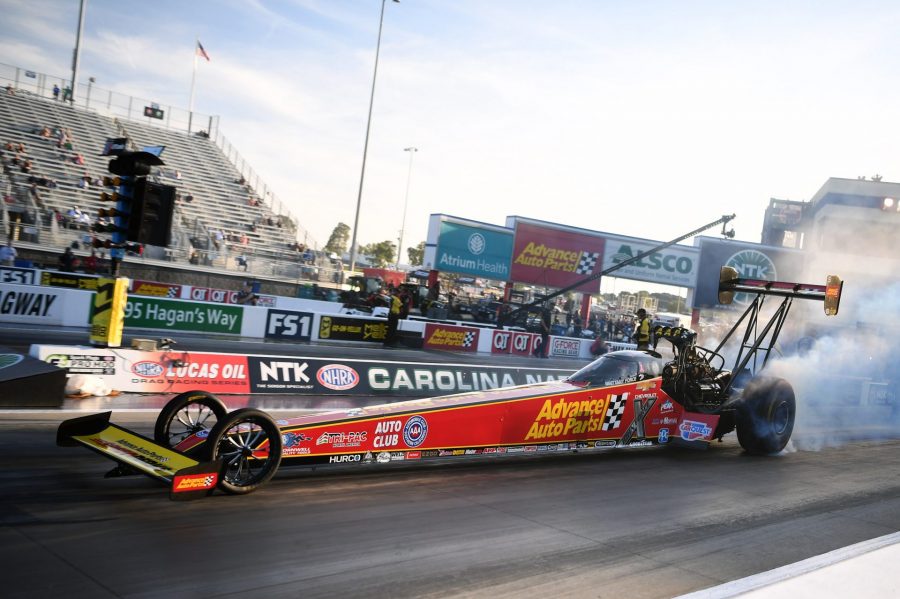 ENNIS, Texas (Oct. 16, 2019) — Brittany Force, driver of the Advance Auto Parts Top Fuel dragster, makes her way to Texas Motorplex this weekend for the AAA Texas NHRA FallNationals, eager for a breakthrough performance that will have her David Grubnic and Mac Savage tuned hot rod back in the winner’s circle.

From starting the season as a brand-new team, to breaking records and padding history books, Force and the Advance Auto Parts team are sitting third in the points standings as they head to the fourth of six events in the NHRA Mello Yello Countdown to the Championship with eyes set on the Top Fuel title.

At last weekend’s event at zMAX Dragway, Force jumped six spots on the final day of qualifying to enter race day as the No. 3 qualifier. In the first round, the racing pro powered her Advance machine to a stout 3.698-second pass for low E.T. of the entire event and advance to the quarterfinal. There she had a holeshot victory over Billy Torrence that set her up for a fourth semifinal appearance of the season. Although a dropped cylinder would result in her coming up short of a final round appearance, Force would move to third in the points standings, only 92 points back from leader and reigning champion Steve Torrence.

“This Advance Auto Parts team is coming off a positive weekend in Charlotte. We picked up four bonus points throughout qualifying, got to the semifinals and moved to third in points. We need to continue our progress and keep the focus,” said Force. “We want to move up closer to that No. 1 spot and its going to be really important for us to continue building on our momentum in these last three races of the Countdown. Dallas is this weekend, so I’m looking forward to seeing what we can do there.”

The 2017 Top Fuel world champion, who set the national elapsed time record with a 3.623-second pass at the opening race of the Countdown in Reading, Penn., makes her way to the FallNationals with one win, two runner-up finishes and seven No. 1 qualifiers including four NHRA history making green hat starts.

At the 50th anniversary Gatornationals, Force became the first woman since Shirley Muldowney in 1979 to secure the No. 1 qualifier at the event. Then, at the SpringNationals, she took the top spot with her father, John Force making them the first professional parent-child duo to be No. 1 in NHRA history. She went on to the Chevrolet Performance U.S. Nationals, to pick up another No. 1 qualifier and become the first female Top Fuel driver to occupy the position at the sport’s biggest race of the season. Force immediately followed up her U.S. Nationals performance by becoming the first woman in 42 years to secure three consecutive green hat starts at NHRA Nationals in Reading.

“We’re ready to head straight to Dallas. This Advance team has waited a long time to get in the winner’s circle again and I’m hoping this weekend is it for us,” said Force who has one win at the Motorplex from 2017, the same year she won the championship. “I’d really love another win here at Dallas. This is a AAA race too, so we want to do a good job for them and all of our sponsors.”