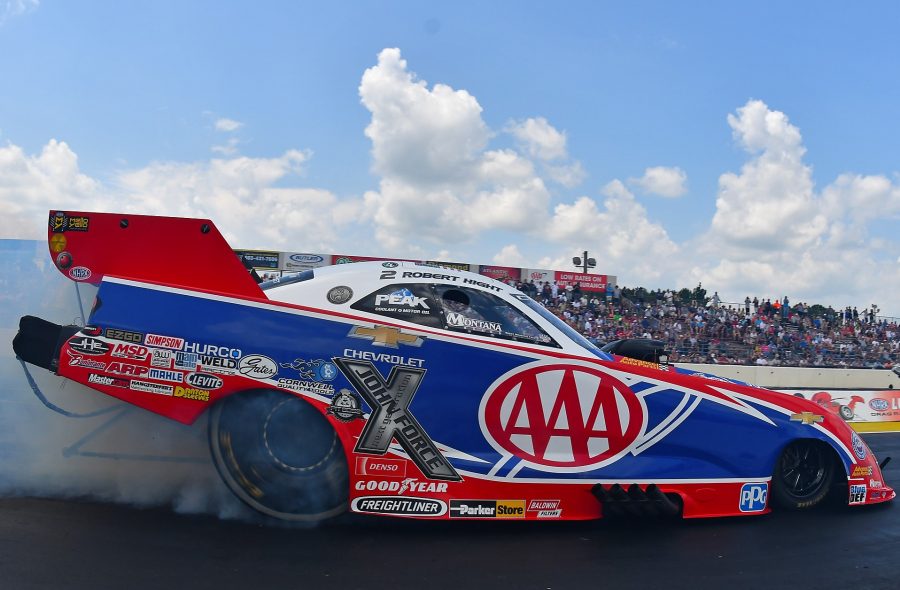 After dominating Monday’s Carolina Nationals for a career best sixth win of the season that also marked his 500th round win, Hight now has a 44-points lead as he enters the fourth NHRA Mello Yello Countdown to the Championship event.

In addition to adding another Wally to his already impressive resume this season, the two-time Funny Car world champion also has two runner-up finishes and eight No. 1 qualifiers including two NHRA history-making green hat starts. At the 50th annual Gatornationals at Gainesville Raceway, Hight became the first driver since 1987 to be the No. 1 qualifier at three back-to-back events, and at the Southern Nationals, was recognized as the first since 1987 to clinch the top spot in five of the first seven events.

The 15-year racer also picked up a milestone 50th career win at the Sonoma Nationals this year, clinched the regular season championship for the first time in his career and doubled-up with teammate Brittany Force for the third time at the SpringNationals in Houston, Texas.

“This season has been pretty incredible,” Hight said. “We’re nearing the end of the Countdown and we extended our points lead in Charlotte and this AAA Texas team, they really pulled together and did a good job. Winning in Charlotte earlier this week is what we needed and anything can happen with points and a half when Pomona rolls around. The Funny Car class is so tight, anybody can win so we just have to stay focused and work hard.

“Jimmy Prock and Chris Cunningham, the AAA Texas team, this is all they want, winning a championship. We didn’t get it done last year and that’s all they want and it’s what I want too. They don’t even want to go home. They just want to stay on the road, get this race car prepared perfectly.”

Hight, who heads to Texas Motorplex with championship history on his side, has four wins at the facility including one in 2009 and 2017, the same years he claimed the Funny Car championship title. At the event in 2009, Hight took home the Wally and claimed the points lead before picking up his first championship, and then in 2017, left Dallas only 24 points behind then points leader, Ron Capps where he then went on to secure his second Funny Car world title at the final race in Pomona, Calif.

At last year’s FallNationals, Hight, who just nine days before qualifying had surgery on a broken collarbone after a fiery win in St. Louis, powered past rivals Jim Campbell, Tim Wilkerson, Bob Tasca III and J.R. Todd to enter the winner’s circle for a back-to-back victory at the Motorplex.

“I love racing at the Motorplex. It’s a AAA race, we have three of those during the Countdown, and it makes it even more motivating to get in the winner’s circle. Anytime we have a sponsor race, we want to get them that Wally,” said Hight who has qualified six times at the facility. “This AAA Texas team has been successful there too. We won there last year and in 2017, so we’d like to make it three straight years that we’ve won this weekend.”