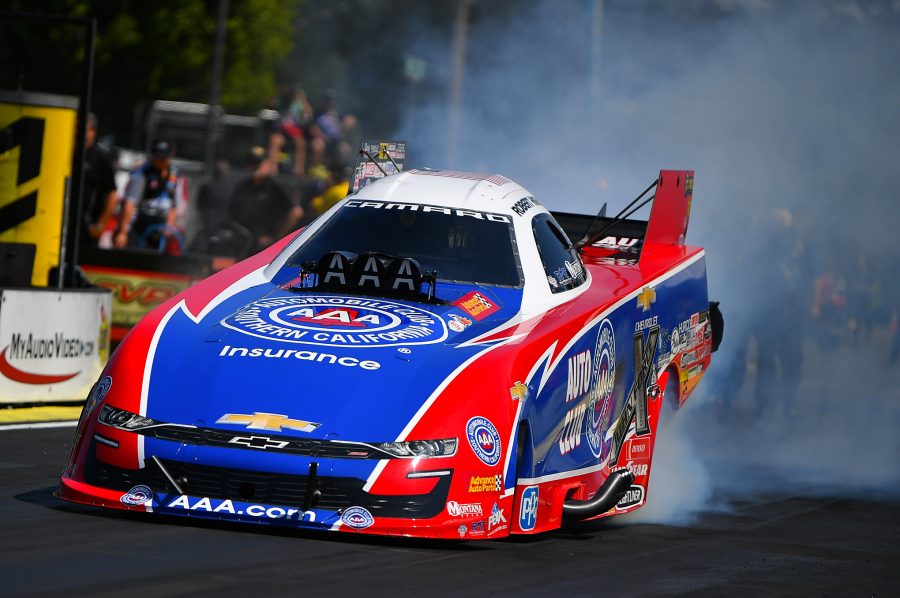 Hight, who is already locked in for the NHRA Countdown to the Championship, has tallied five wins, two runner-up finishes, three semifinal appearances and eight No. 1 qualifiers this season as he chases his third Funny Car world championship title.

On his road to success, Hight has padded the NHRA history books with two of his green hat starts. The first came at the historic Gatornationals when he became the first driver since Kenny Bernstein in 1987 to collect three consecutive No. 1 qualifiers, and again at the Southern Nationals, when he secured the top spot to be the first driver since 1987 to be No. 1 in five of the first seven events. Hight also shared the winner’s circle with teammate Brittany Force in a John Force Racing double-up at the SpringNationals, and most recently won his 50th milestone victory at the Sonoma Nationals.

In Kent, Wash. for the Northwest Nationals just two weeks ago, the two-time Funny Car world champ propelled his Jimmy Prock and Chris Cunningham tuned hot rod to four impressive qualifying passes including one run that earned him the top speed of the weekend, when he blasted his Auto Club Chevy to 331.28 mph. He kept the consistency on race day posting the top speed of the day when he took his machine to 330.55 mph in the first round. Although Hight would fall short to mentor and eventual event winner, John Force in the quarterfinals, he would keep his stronghold on the Funny Car class with an 186 points lead.

The drag racing fan turned driver and president of the most recognized team in the sport, spent his off weekend at Summit Motorsport Park in Norwalk, Ohio for the 42nd annual Kelly Service Night Under Fire match race where he outran Ron Capps’ 3.96-second pass with a 3.91 to win the exhibition for the fourth time.

“This Auto Club team had a tough race day in Seattle, but we put up four respectable runs in qualifying and had a good first round win. That made 13 consecutive quality runs for us and you know, that helps us get good. We didn’t go rounds like we had hoped for on race day, got defeated in the second round to my boss John Force, but if you’re losing to anybody it might as well be him,” said Hight. “We were at Night Under Fire in Norwalk over this off-weekend and that gave us a chance to get back in the driver’s seat and we ended up winning that event, so its good momentum for us going into Brainerd.”

Hight enters this year’s NHRA Nationals at Brainerd International Raceway with success on his side. In 2015, he battled his way to the winner’s circle defeating rival Tommy Johnson Jr. He’s also picked up two green hat starts in 2017, the same year he won the Championship, and recently in 2018.

“I’m excited to get to Brainerd this weekend. I’ve done well at this track. I’ve won here once, qualified well here and been in the top of the field I think eight times so I’m looking forward to repeating some history with my team and crew chiefs Jimmy Prock and Chris Cunningham,” said Hight. “The Countdown to the Championship is just around the corner now and we want to continue to perform like we’ve been all season. Its time to get in that’s winner’s circle again.