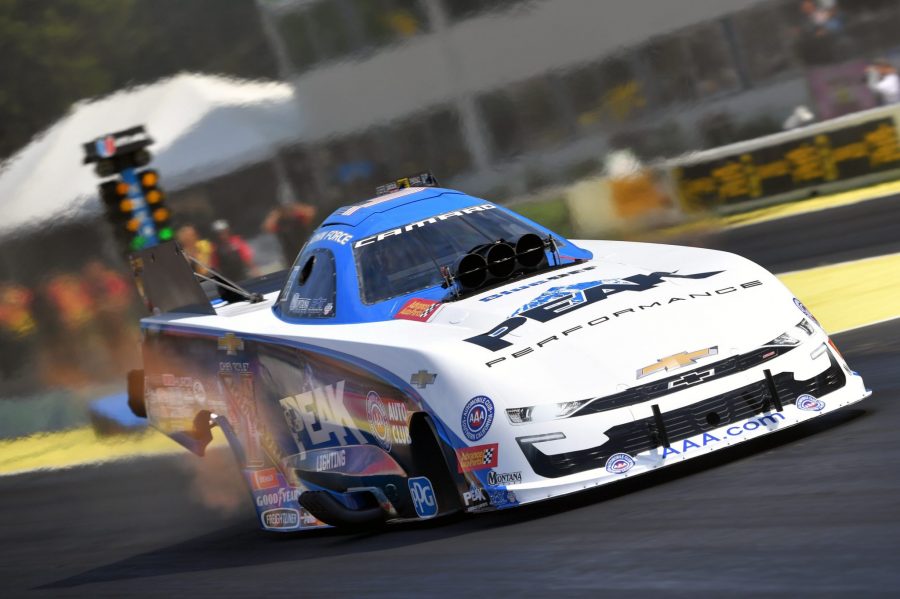 BRAINERD, Minn. (Aug. 14, 2019) — Having etched his name on a couple more pieces of drag racing history with a victory two weeks ago at the NHRA Northwest Nationals at Kent, Wash., John Force turns his attention to another milestone this week when he drives the PEAK Coolant and Motor Oil / Lighting Chevrolet Camaro SS in pursuit of the Funny Car championship at the 38th annual Lucas Oil NHRA Nationals.

With tour win number 150 in the books, the sport’s most decorated driver can focus on the next item on his competitive “to do“ list and that is winning the NHRA Funny Car championship for an unprecedented 17th time in the last 33 years.

When racing begins Friday at Brainerd International Raceway, a track on which he has won a record 11 times, Force will trail only teammate and protégé Robert Hight, driver of the Auto Club of Southern California Chevy Camaro, in points.

Although he is not ruling out the possibility of winning the regular season championship, especially with bonus points available at the Chevrolet Performance U.S. Nationals on Labor Day weekend, Force‘s primary goal the next two races is to hold onto the No. 2 spot in anticipation of the points adjustment the NHRA will make before the six-race Countdown to the Championship begins Sept. 13-15 at Reading, Pa.

Having already secured his record 35th straight Top 10 finish, the Hall of Fame owner-driver knows that if he can stay in front of Ron Capps, Jack Beckman and Tommy Johnson Jr., the drivers immediately behind him in the current standings, his deficit to start the playoffs will shrink from the 186 by which he currently trails his teammate to a much more manageable 20 points.

“I may not be as young as these kids and I may not be a hot shot on the ‘Tree anymore,” Force said, referring to the NHRA’s electronic Christmas Tree starting system, “but if you give me a good race car, I can still win and right now I’ve got a race car as good as anyone’s.

“(Crew chiefs) Brian Corradi and Daniel Hood and (car chief Tim) Fabrisi have had to put up with me all year,” he admitted. “I was unhappy with so many things: the way the car steered, how I sat in it, a lot of things. It’s my baby girl’s car (the Camaro driven last year by Courtney Force) only there’s 70 more pounds in the seat and we had to adjust for that.

“I had to get to know my car and sometimes you just need a slap in the face. I got that from Corradi and (legendary former crew chief) Austin Coil,” Force said. “Now that I’ve got that monkey off my back (the pressure of winning his 150th title), I’m ready for the Countdown. I’m in the hunt and that’s all I ever wanted to be.”

From a big picture standpoint, the former Driver of the Year (1996) has no idea how many more wins are in his future or how many more years he can add to his streak of 32 seasons with at least one tour victory. At age 70, though, he knows he’s racing on borrowed time.

“I’m still racing because I love these fans and I love this sport,” he said. “I’m still excited. God will tell me when it’s time. Until then, I’m giving it all I got. I never thought I’d be lucky enough to get five wins. Now I’ve got 150. I give the credit to a lot of crew chiefs over the years, especially Coil and Bernie Fedderly, but they all taught me and got me to where I am today.”