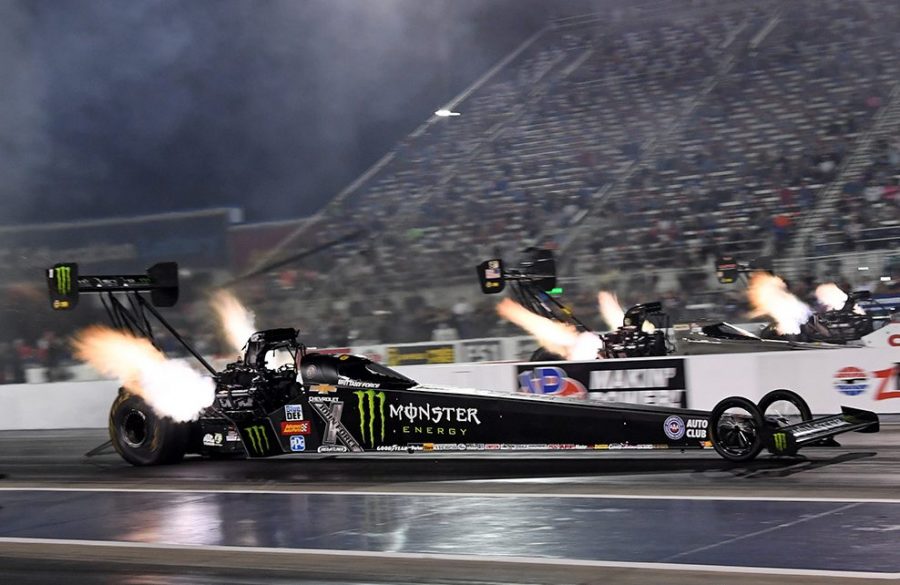 CONCORD, N.C. (April 27, 2018) — Brittany and Courtney Force both currently hold the No.1 qualifying position after two rounds of qualifying at the NGK Spark Plugs NHRA Four-Wide Nationals at zMAX Dragway just outside of Charlotte. Teammates Robert Hight and John Force are qualified seventh and eighth respectively.

The Force sisters will be racing on Saturday to double up as No. 1 qualifiers for the second time, they previously secured the top spot together in 2016 at the Topeka, Kan. event.

“It is a family sport and we love being out here together,” explained Courtney Force. “I got to get on the starting line and watch her make a killer run in her Monster dragster. I saw that number and knew that she got the top spot. Obviously, we are both hoping to hold onto the top spot through tomorrow night but there are a lot of great cars out here. I was excited to see her make that pass and we’ll see what happens.”

“It is pretty exciting to be able to share this with my sister,” Brittany Force shared. “Every weekend whether it is a great weekend or a tough weekend she is right there beside me. I go to her for advice. It just feels good to do this together. It is pretty special.”

Brittany Force stole the Top Fuel provisional No. 1 spot and set the track elapsed time record with a stellar 3.689-second pass at 318.39 mph in her Monster Energy dragster. Her commanding performance came during the second qualifying session, under the lights and with eight foot tall header flames adding to the spectacle of four-wide racing.

“It felt good especially compared to the run we made earlier. It went down there but we got in trouble on that first run,” said Force, who is the only woman to win in the unique four-wide format. “That last run I just wanted a clean safe pass down there. I wasn’t expecting to go No. 1. They told me when I got out at the top end and my team was so pumped. That will be the run of the weekend. Tonight was our best shot at making a run that would put us No. 1. Tomorrow will be different, as far as conditions, and they should be more similar to race day. Tomorrow is about getting set up for Sunday. We are hoping to hold onto that top spot for sure.”

Force, racing her third dragster of the season, is coming off a victory at the most recent NHRA Mello Yello Drag Racing Series event, the NHRA SpringNationals. Force debuted her current hot rod at the event in Texas and was a top performer all weekend.

“This is a new dragster that be brought out before the Houston race and we won that race. This team is excited about it and we are ready for the rest of the races this season,” Force said.

Courtney Force powered her Advance Auto Parts Chevrolet Camaro SS Funny Car to a 3.873 pass at 332.92 during the opening qualifying round on Friday afternoon that held up through the night session.

“This is a great start for us for the weekend,” Force said. “To go out there Q1 and step up with a run that made us No. 1 makes me really proud of my Advance Auto Parts guys. To come right out of the box and run that kind of number shows how good Brian Corradi and Danny Hood are. In Q2 I think in that final quad everybody was gunning for that top spot. We pushed it hard. Luckily, we were able to hang on to the No. 1 spot. Conditions are going to be really good tomorrow so we will see if we can hold onto it for another day. It sure feels good to come out to zMAX Dragway for four-wide racing and to get the top spot on Friday.”

Consistency has been on Force’s side through the start of the 2018 season, she has qualified in the top four at every event and was the No. 1 qualifier at the Las Vegas four-wide event.
“We are going to keep trying to be consistent and runs like the one we made in Q1 give us a lot of confidence. We want to have a long weekend with this Advance Auto Parts Camaro,” Force added.

Two-time and reigning world champion Robert Hight opened the day with a 3.920 pass at 323.50 in his Auto Club of Southern California Chevrolet Camaro SS. The first session run lands him in the seventh position after overpowering the track in the night session.

“We made a good run in the first session,” explained Hight, who has two No. 1 qualifiers at the four-wide event. “We were third quickest I think and that got us into the last quad. It got a little cool and I think all four Funny Cars were going for the No. 1 spot. We were just a little too aggressive and overpowered the track. Jimmy (Prock) has a good handle on this Auto Club Camaro and tomorrow we will start getting ready for race day.”

Sitting in a much more comfortable position than a week ago, John Force is currently qualified eighth with a 3.938 pass at 328.06 in his PEAK Coolant and Motor Oil Chevrolet Camaro SS. The 16-time world champion has had a tough start to his season so his current position has him looking forward to the rest of the weekend.

“That was a good run,” said Force. “We are in the show and that is what our sponsors like PEAK, Auto Club, Monster, Advance Auto Parts and Chevrolet expect. We struggled last week but we are getting back. We will keep getting better. This is a great facility and the fans love four-wide. We will get two more shots tomorrow and make the best of them.”

Qualifying continues at the NGK Four-Wide Nationals continues Saturday with sessions at 2:30 p.m. and 4:30 p.m. Eliminations are slated for noon on Sunday.