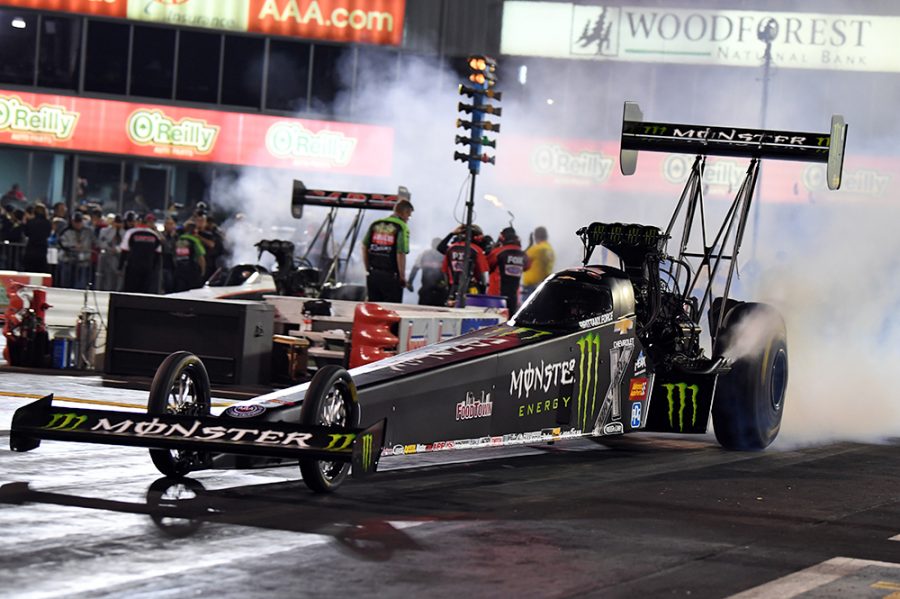 CHARLOTTE (April 25, 2018) — It is amazing what one win can do for a reigning world champion. Emotions poured out of 2017 NHRA Mello Yello Top Fuel champion Brittany Force last weekend when her Monster Energy Top Fuel dragster got to the finish line first in the finals of the NHRA SpringNationals in Houston. It was Force’s eighth career Top Fuel win but, even more than the championship, that win was significant coming on the heels of a devastating crash to start the season.

“That emotion was built off of the championship. It was built off of Pomona this season. Leaving Pomona last season we were on a huge high. We won the championship and that is something every driver dreams about,” explained Force. “We were able to do that and then, coming out to the opening race of the season, at the same track in Pomona, it was the ultimate low.”

Force spent the next several races rehabbing her body and mind. She continues to receive physical therapy and has begun her regular workout routine. The lone John Force Racing Top Fuel racer had a plan for her return to the track that amazingly did not include missing any races.

“It was really tough in Phoenix getting back in that car. My guys knew it and for me I didn’t care about winning the race. All I cared about was getting back in the car and making runs. Gainesville was ‘game on and Pomona is behind us.’ This (Houston win) is a huge surprise because looking at last season we got our first win a lot later in the year. This win is big for us. It puts Pomona behind us and it pushes us towards another championship.”

The fact that it took just four events since the crash for Force to get back in the winner’s circle is impressive on a variety of levels. Force won last weekend in a brand new Monster Energy dragster which now has a total of eight runs on it.

“This was our third car this season. That was a lot of work for my team and fab shop guys,” said Force. “We pulled this car out this weekend and we didn’t go testing in it. Qualifying were the only runs we got. I asked about making half-track runs and they said to go ahead and take it all the way to the finish line. We were No. 1 on Friday and then got moved to No. 2. To get this win on race day is huge for all of us.”

Coming into the ninth annual NGK NHRA Four-Wide Nationals Force, in addition to momentum, also has history on her side. She is the only woman driver to have won a race in the four-wide format. Her 2016 victory at Charlotte came in a star-studded final quad that included Clay Millican, Doug Kalitta and Antron Brown. With the Las Vegas four-wide as a warm up, Force is feeling good about returning to Charlotte.

“It will be nice since I am a little more familiar with it since we are just coming out of the Las Vegas race. You aren’t jumping into it right away. We won in Charlotte a couple years ago so the team has confidence racing there. We would like to pick up two wins in a row,” explained Force.