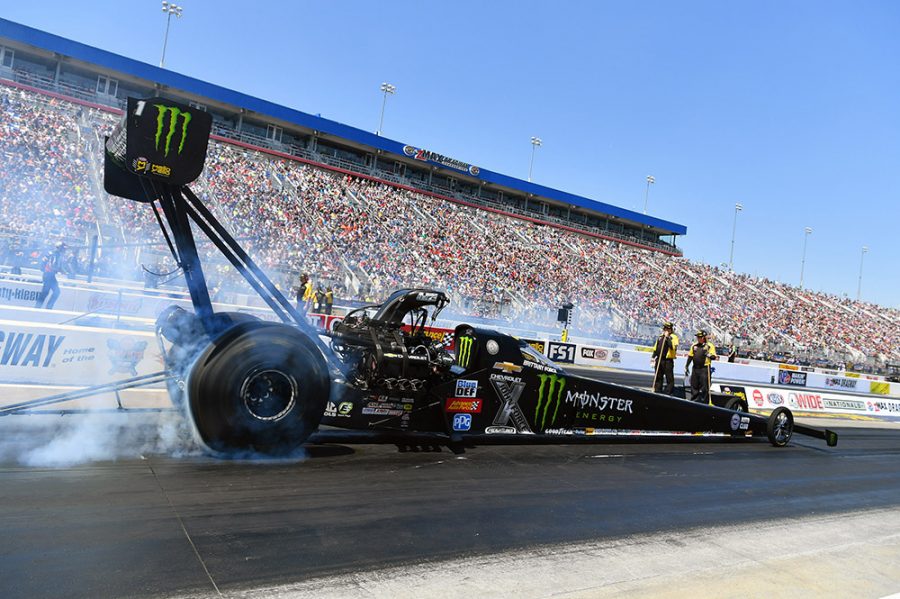 Previously, Brittany and Courtney Force have qualified No. 1 together in 2014, first in Topeka, Kan. and then again in Sonoma, Calif. On both occasions, Courtney has gone on to win the event, a stat she’d like to continue as she’s yet to win at zMAX Dragway.

Brittany Force’s track elapsed time record pass of 3.689-seconds at 318.39 mph in her Mosnter Energy dragster from Friday night was unchallenged throughout Saturday’s qualifying sessions. It is her first No. 1 of the season, first at zMAX Dragway and ninth of her career. Force is carrying momentum from her first win of the season at last weekend’s NHRA SpringNationals where she debuted a new dragster after wrecking in the opening race of the season and having to race her 2017 championship car while her current hot rod was being built.

“We are feeling really good and just looking at our season overall and everything we pulled off these last few weekends is incredible,” explained Force, the reigning Top Fuel world champion. “This is the third car that we have run in the season and it’s not easy when you have to rebuild a whole new car, especially for my guys and what they had to go through. They had a lot of extra work getting it ready but we went out, debuted it and won the race. You know, that is pretty impressive. I owe it to Alan Johnson and Brian Husen and my Monster guys for making that happen. We are on a roll and I am happy that we qualified No. 1 last night and we hung on to that spot today, but tomorrow is a whole new day and our plan is to go some rounds and to win this thing.”

Force has had success in the four-wide format and became the only female to win in the unique spectacle in 2016 at zMAX Dragway.

“It definitely helps that we won it a few years ago. That just puts our head in the right place. We did it once, and we want to do it again. The Four-Wide is awesome and to have that win under our belt, that’s a special win for us. But, we want to do it again. And Courtney is No. 1 and to see both of us do it would be incredible,” added Force.

Force’s first step in checking that double-up off her bucket list will be out running Audrey Worm, Shawn Reed and Scott Palmer in the first quad of eliminations.

Courtney Force needed only one pass down the race track to flex the muscles of her Advance Auto Parts Chevrolet Camaro Funny Car. She secured her third No. 1 qualifier of the season, fourth at zMAX Dragway and 20th of her career with her 3.873 pass at 332.92 mph from the first session on Friday.

“To get the win tomorrow we are going to have to learn from our runs today and yesterday,” said Force, “I think it is going to cool off tomorrow so hopefully we can build off our run from Friday that got us No. 1. We are looking for a long day tomorrow. We have been No. 1 at the four-wide here before and we would like to get that win.”

Gaining another win is at the forefront of Force’s mind, especially in her primary sponsor Advance Auto Parts’ own backyard, to do so the winningest female Funny Car driver in NHRA history will need to get past father John Force, Jim Campbell and Tim Wilkerson in the opening quad of race day.

“We have yet to win a four-wide race and it would be awesome to do it this weekend in the hometown of Advance Auto Parts. They had a ton of employees and customers out at the track today and it was exciting for us to be able to hold onto that top spot for them,” added Force.

Like Courtney Force, reigning Funny Car world champion Robert Hight secured his qualifying position with his first run of the weekend on Friday. Hight’s 3.920 pass at 323.50 puts him in the seventh position heading into Sunday’s eliminations. Hight and his team used Saturday to prepare his Auto Club of Southern California Chevrolet Camaro SS Funny Car for race day conditions. Even with tricky track conditions Hight was third quickest of the fourth qualifying session.

“We made a really good run right out of the trailer yesterday. The conditions were killer last night so we were going for No. 1 and didn’t get to the finish line under power,” said Hight, who has two wins in the four-wide format. “Today the track was warmer and we were looking for a race day tune up. I think we will be in good shape for tomorrow with this Auto Club Chevrolet Camaro. It will be cooler and when this Funny Car is right it is really quick. It will be an exciting day and I am looking forward to giving the fans a good show. There were a ton of people here today and it was good to see so many people here in NASCAR country.”

With a total of five wins at zMAX Dragway, Hight will begin his hunt for six against veteran Ron Capps, Dale Creasy and Swedish phenom Jonnie Lindberg in the first round.
Team namesake and 16-time world champ John Force is hoping his early season woes are behind him after securing the No. 8 qualifying position in his PEAK Coolant and Motor Oil Chevrolet Camaro SS Funny Car. Force ran a 3.938 pass at 328.06 under the Friday night lights.

“I am happy my PEAK Camaro is going A to B again,” Force said. “We made a couple good runs. I qualified in the top half and this four-wide race will be exciting. Knock on wood I think we have a lid on our problems. I am looking forward to racing beside my daughter Courtney all day tomorrow.”

Qualified in the top half of the field, Force will look to continue going A to B while also picking up some round wins. His first challenge will be against daughter and No.1 qualifier Courtney Force, Jim Campbell and Tim Wilkerson in the first quad of Sunday eliminations.