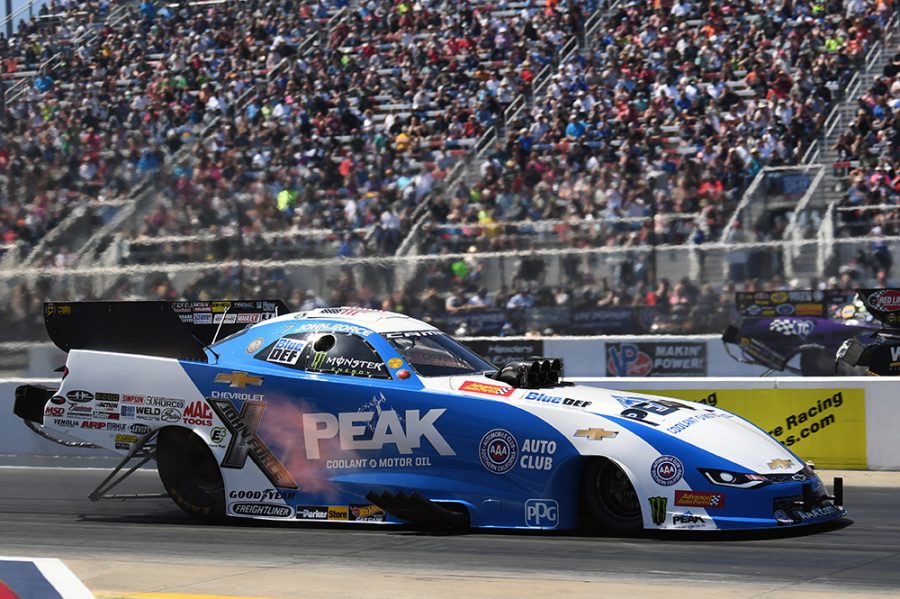 The start to the 2018 season has been anything but easy for the winningest driver in NHRA history with multiple engine explosions, trips to the hospital, witnessing daughter Brittany Force wreck in Top Fuel and failing to qualify for the first time in ten years last weekend in Houston. John Force won’t say it’s all behind him but he can say he’s moving forward and his runner-up finish at the NHRA Four-Wide Nationals is a testament to that.

“When you go through what we’ve gone through and then not qualify last week, it really hurts,” said Force. “The race car is starting to come back. We don’t even have a tune-up in it yet because it’s dropping cylinders every run, but it ain’t blowing up. We still ain’t figured out why it’s blowing up. It’s just too much mentally on you. I’m shell-shocked, too. The good thing is I’m starting to feel physically well. I want to thank our sponsors. It ain’t over yet.”

Force, the No. 8 qualifier, opened his day running a 4.307-second pass at 283.19 mph in his PEAK Coolant and Motor Oil Chevrolet Camaro SS, second quickest to daughter and No. 1 qualifier Courtney Force who ran a 3.979 at 311.41 in her Advance Auto Parts Chevrolet Camaro SS during their first quad. With a tricky track and inconsistent day-to-day weather conditions, a last-minute lane swap from lane three to lane two could have been the deciding factor for John Force. The Force father-daughter duo knocked out Jim Campbell and Tim Wilkerson.

“Unfortunately, we weren’t able to get lane choice and I’m a little frustrated because I feel that’s part my fault,” said Courtney, who is now second in the Mello Yello points standings. “I should have kept the car straighter in the second round, and if I could have kept it straighter and not out of that groove to the left I would have been able to hold onto it instead of coasting for that win in the second round.”

Lining up for the final pass of the day, the Forces were limited in lane choices as the third and fourth quickest in the quad. Courtney was forced to run in lane one, the least desirable while John squared up in lane two.

“It’s unfortunate that we weren’t in the best lane, and it was a little aggressive up there and caused us to strike the tires.” Courtney explained. “I just had to pedal it from there and kind of hope for the best. Job well done by my team. I’m really proud of them. They gave me a fast hotrod every single round that I went out there, and to be able to do that at the home track for Advance Auto Parts really meant a lot.”

“I know it means everything to my sponsors, PEAK, Advance Auto Parts, Auto Club, Monster and Chevy,” said John, now 11th in points. “I have to thank the brain-trust from Jimmy Prock to Chris Cunningham to (Brian) Corradi and Danny Hood, all of them have been helping us. It has been the hardest on Jon Schaffer and Jason McCulloch. I stood by them and the race car is starting to come back. I am only a few points out of the top ten.”

Reigning world champion Robert Hight had a first round pass of 4.566 at 273.27 after pedaling his Auto Club of Southern California Chevrolet Camaro SS to advance to the second round of eliminations with Ron Capps. The veteran drivers defeated Dale Creasy and Jonnie Lindberg.

“When you are racing four-wide anything can happen. You can’t see all the race cars. You can only see your side. Sometimes it is nice to win like that (pedaling),” said Hight who qualified seventh and is fifth in points.

Hight’s second round was stacked with experienced drivers. In addition to Capps, Hight faced Tommy Johnson Jr. and Cruz Pedregon who both had lane choice over the two-time world champion. Hight had to work hard during the second round pedaling to a 4.610 pass at 192.49 that fell short to Pedregon and Johnson Jr. for a quarterfinal finish.

“This was a tricky race track all weekend. We got the win in the first round today but I had to pedal it. It was close at the finish line but the name of the game at four-wide is win and advance. We didn’t get lane choice which was unfortunate. We had the third pick in the second round and we just couldn’t get down that lane under power,” explained Hight. “This Auto Club team is holding their heads up. We are getting ready for Atlanta and putting this race behind us. The fans love the four-wide format and now we will finish the season out with traditional side by side racing. I was very happy to see John get a runner-up finish for the PEAK Chevrolet team. All our race cars are starting to get stronger and that will help all our teams.”

Brittany Force, who qualified No. 1, had an early exit Sunday when the tires smoked and she pedaled her Monster Energy dragster to a 4.473 pass at 264.18 to finish third in her first quad of eliminations.

“It’s definitely tough. My team is convinced that the No. 1 qualifier is never good luck, it’s a curse just because there’s all that added pressure that follows it. We struggled. It’s tough out here at four-wide and conditions changed every single day so that’s a lot on my crew chiefs and the entire team. Unfortunately, we went out in the first round. But the good thing is we pack up and go to the next one in Atlanta.”