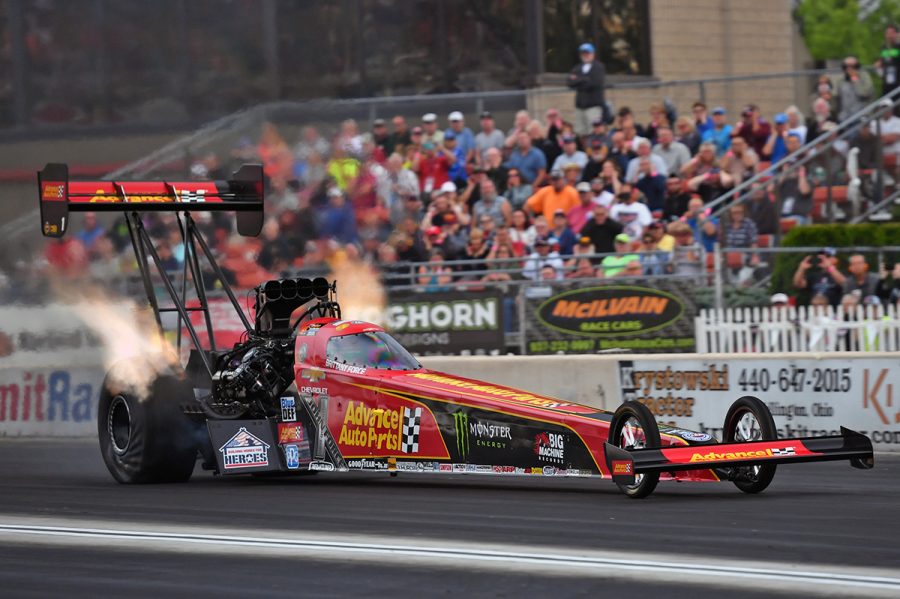 NORWALK, Ohio (June 22, 2018) — Brittany and Courtney Force secured the preliminary No. 1 qualifiers in Top Fuel and Funny Car, respectively, Friday at the Summit Racing Equipment NHRA Nationals. The start of the day was delayed due to rain and was cut short after one pro qualifying session due to inclement weather at Summit Racing Motorsports Park outside of Cleveland. After the one session, John Force landed in the No. 4 spot and Robert Hight is just behind him in fifth.

Courtney Force powered her Advance Auto Parts Chevrolet Camaro to a 3.935-second pass at 327.66 mph to take the top spot during the final pass of Funny Car qualifying on Friday evening.

“To be honest, I thought we were going to have a safe run, get it from A to B knowing about the weather and the rain coming but I knew that (Crew chiefs) Brian Corradi and Dan Hood were going to shoot for a good run, especially after seeing Capps and Hagan run .96 and .98. That was a fantastic run. We had a chance to see what everyone else was doing and Corradi and Hood, they were shooting for the moon. It was a handful down there (at the finish line) but we were able to gather it up and get the No. 1 spot.”

Brittany Force took her Advance Auto Parts Monster Energy dragster to the No. 1 spot with a 3.776-second pass at 324.44 mph while running in the middle of the pack during Friday’s qualifying.

“That was an awesome run. I felt good going into it,” Force said. “Conditions were good. Alan Johnson and Brian Husen always pull out great numbers like that. We went straight down there. It moved around a little bit toward the top end but I hung in there till 1,000 feet and we put a .77 on the board. I think the next car behind us was a .79. So, we’re pretty pumped about that. It was a stout run.”

“It was very important for our Advance Auto Parts Monster Energy team to get the car down there, with the rain you don’t know how many laps you’re going to get going into race day but the conditions were great. It was definitely a big adjustment coming here after two weekends with hot conditions but Brian Husen and Alan Johnson and the whole team adjusted well.”

Both Courtney and Brittany Force are looking for their first No. 1 qualifiers at Summit Racing Motorsports Park. The Force sisters have qualified No. 1 together three times in their careers, the most recent was earlier this season at the Charlotte Four-Wide Nationals. While they’re more than happy to sweep the top spots in qualifying, they’d really like to share the winners circle on Sunday.

“It’s exciting to share a No. 1 with Courtney and we’re hoping to hang on to that going into race day but really we want to go for a win,” explained Brittany Force. “That’s the one thing we both would love to do, to double up, especially this weekend, I’m with Advance Auto Parts and to have matching cars and to be able to be in the winners circle would be pretty awesome.”

John Force and Robert Hight both benefitted from changes made to their Chevrolets in the couple of days before the start of the Summit Nationals.

Hight’s Auto Club of Southern California team made wholesale changes to the engine combination after bowing out of last week’s Thunder Valley Nationals at Bristol, Tenn., in the second round.

“We switched our whole combination back this week to what we ran last year,” Hight said after putting up a 4.017 at 322.27 mph in Friday’s only completed session. “We had bigger (cylinder) heads on it all year, different camshaft, different supercharger, lots of stuff different because we were trying to run fast and set records. We decided to make a change because the conditions aren’t there, the track’s not there, the records aren’t there. The best car out there right now is Courtney’s and they’re running Jimmy’s combination from last year.”

Meanwhile, Force’s crew changed the steering on his PEAK Coolant and Motor Chevy Camaro SS Friday morning and the 16-time champion responded by putting the car in the No. 3 spot after day one with a 3.991-second pass.

“It was good,” Force said. “The important thing was to go A to B, especially since we were out so early and the rain was coming. The steering is a lot quicker (now). I got down there and just turned it a little and it moved hard so I had to steer it back. Steering is a lot more positive than it has been.

“It felt good to put up that number, especially here at Norwalk. I love this place. I’ve run a lot of races here and seen all the money Bader has put into the track to make it one of the best.”
Qualifying at the Summit Racing Equipment NHRA Nationals is set to continue, weather permitting, Saturday with sessions at 1:30 and 4:30 p.m. Eliminations are Sunday beginning at 11 a.m.