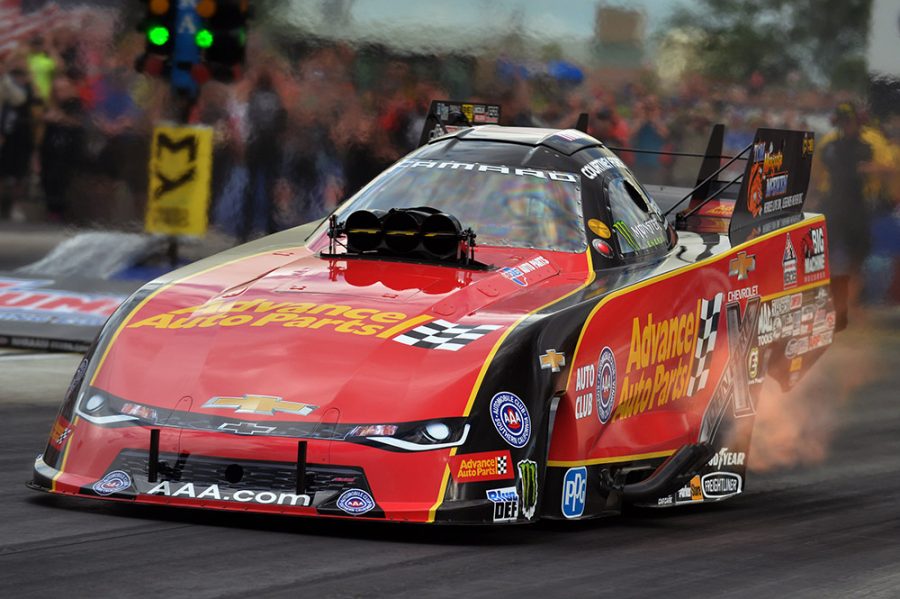 NORWALK, Ohio (June 23, 2018) — Courtney Force has secured her eighth No. 1 qualifier of the season at the Summit Racing Equipment NHRA Nationals at Summit Motorsports Park outside of Cleveland. John Force and Robert Hight also maintained their qualifying positions in fourth and fifth respectively and Brittany Force piloted her dragster to the No. 2 spot.

Qualifying at the 12th of 24 events on the NHRA Mello Yello Drag Racing Series was cut short to only two sessions, one on Friday and one on Saturday, due to inclement weather.

Courtney Force, the winningest female in NHRA Funny Car history, set yet another record for women in the Funny Car category when she and her Advance Auto Parts Chevy Camaro SS held on to the No. 1 spot with their 3.935-second pass at 327.66 mph. She is the first female to earn eight No. 1 qualifiers in a season.

“I really can’t take credit (for the eight No. 1 starts this year). It’s my team. It’s (crew chiefs) Brian Corradi and Dan Hood and every single one of my guys working on this Advance Auto Parts car,” Force said. “My crew chiefs have it figured out pretty well. I’m really excited to be driving this Advance Auto Parts Chevrolet Camaro Funny Car. To be honest, I was hoping we would get a few more runs to get a little more comfortable on this new racetrack. When (the track is) new and you’re not really sure what you’re working with to be able to put up a number like we did on your first run and go to the top is a testament to the job my team did. I’m excited about it and ready to run it all day tomorrow.”

“Obviously, we were looking to improve from Friday’s ET but unfortunately we dropped a hole downtrack,” Force explained. “It got a little close to the wall and I had to shut it off but we still were able to stay in the top spot. It wasn’t the run we were looking for but it got down there most of the way. If we’re able to pick up that cylinder and get it to not drop that hole, I think we’ll be okay.”

This is Force’s third consecutive No. 1 qualifier, 25th of her career and the first she has secured at Summit Racing Motorsports Park. She now has qualified No. 1 at 15 of the current event tracks. With track conditions and weather constantly changing this weekend, Force is confident in her team but knows a lot can change on race day.

“I feel like all the drivers are in the same boat,” Force said. “We didn’t get as many runs as we would have liked, especially on a new track surface, but having that one good one makes you feel a lot better and a little more confident going into eliminations.”

To open eliminations, Force will face John Smith, her 42nd different opponent as she chases her first win at the Summit Racing Equipment NHRA Nationals.

“My Advance Auto Parts Monster Energy team has given me another very consistent car,” Force said. “We ran a 3.77 in the right lane and then 3.77 in the left lane so even though we didn’t get all our qualifying runs in because of the rain, I feel good about race day. We lost the No. 1 spot, but we’re sitting No. 2 and that’s fine. I’ll be nervous to get through first round but that’s part of the game. I remember asking Jack Beckman and a handful of other drivers, ‘Do those nerves on Sunday morning ever go away?’ And I got the same answer from every single driver, ‘Nope, those will be there for as long as you’re out here.’ So, I’ll embrace what my dad calls the first round gut ache and just go out there and try to do my job.”

Force will be racing against Terry McMillen in the first round of eliminations, an opponent she has a 17-2 record against.

Even though both could have used the full complement of qualifying runs to adapt to significant changes made this week to their 10,000 horsepower Chevrolet Funny Cars, John Force and Hight are nonetheless optimistic about Sunday’s eliminations.

“I have a lot of confidence because we ran this same combination all last year,” Hight said of major changes made to his Auto Club of Southern California Chevy by crew chiefs Jimmy Prock and Chris Cunningham. “It’s not like we’re putting something foreign in there. (Brian) Corradi (co-crew of Courtney Force’s Advance Auto Parts Chevy) and those guys just took what we had over the winter and that’s what they’ve been running.”

The two-time and reigning NHRA champion will oppose Dale Creasy Jr. in Sunday’s first round. Although he qualified only fifth, he believes his Chevy is very close to running the kind of numbers that have enabled his teammate to start from No. 1 eight times this season.

“(On Saturday’s only run), the clutch didn’t wear like it should,” he said. “We have got to get the clutch to wear but it’s all headed in the right direction to run quicker like Jimmy wanted. He’s thinking if it had made it (to the finish line Saturday), it would have run 3.98. So, we’re close. So, I’m fine. We won a championship with this combination and we ran the quickest and fastest time ever (3.793 seconds at 339.87 mph) with it. We’ll just go out there tomorrow and try to run through these guys.”

Force, meanwhile, will launch his bid for a 149th career victory versus Jim Campbell against whom he is 1-0 in his career.

“I feel good,” Force said. “The concrete is new (at Summit Motorsports Park) but everything else feels comfortable. It’s great to be back at Norwalk for the Bader family and the Ohio fans who have come out to support John Force Racing for the last 15 years.

“We changed the steering on my PEAK Coolant and Motor Oil Chevrolet Camaro SS on Friday,” Force said, “and I’ve just been trying to adjust to how quick it reacts compared to the way it was before. We’ll be fine. We’ve won here before in the Night Under Fire and we’ve won the national event (2014) so we’re gonna go out there and do what we can for PEAK, for Advance, for Monster, for Auto Club, Chevrolet and Parker Store.”