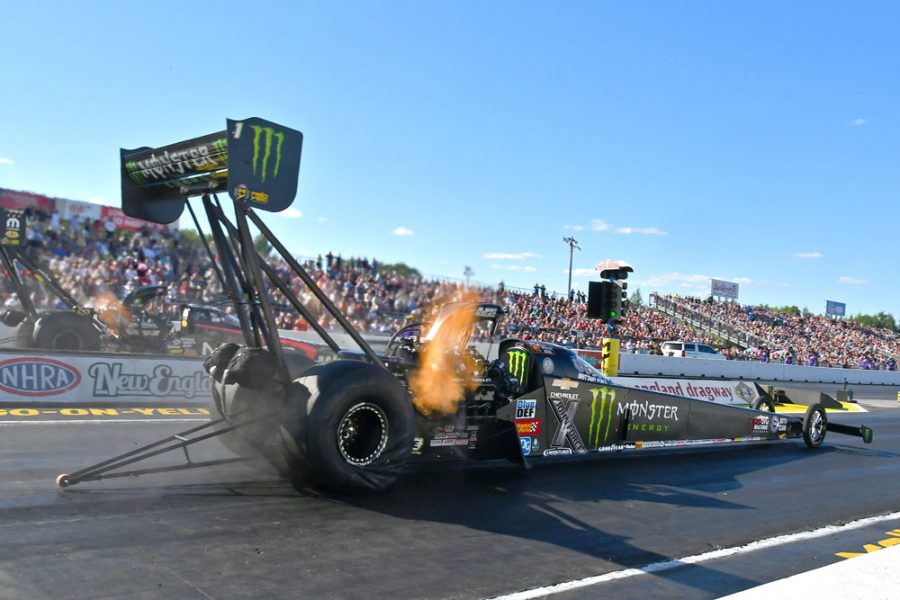 EPPING, N.H. (July 7, 2018) — Brittany Force, back in her Monster Energy colors, will start race day at the NHRA New England Nationals from the No. 4 position at New England Dragway. Her Funny Car teammates Robert Hight, John Force and Courtney Force will line up from the No. 5, 6 and 11 positions, respectively.

Brittany Force, off the efforts of her Friday evening pass of 3.775-seconds at 316.60 mph, qualified fourth for the first time this season and second time at New England Dragway. It is the ninth consecutive race that she has qualified inside the top eight and fifth consecutive race inside the top five. While Force will go into race day in a solid position, the defending event winner had a tricky race tack on Saturday and hazed the tires to 4.459-seconds in the third qualifying session and 3.995-seconds during the final session.

“We had a good run, that 3.77 yesterday, and it almost got down there on that last run. Tomorrow is a whole new day. We’ll just start from there. We haven’t been in the winners’ circle since Houston and we’re looking for that next win. We’d love to do it here. It was our first win last season, here at Epping. To wrap up this whole weekend in the winners’ circle is what this Monster Energy team is going for.”

Force and her team took time to test following the race in Norwalk, Ohio in preparation for that next win.

“After Norwalk, we made two test runs just trying to figure this car out and get a little more background on it. We’ve been qualifying well but we’ve just had trouble on race day it’s just been blowing the tires off the thing. Hopefully, with those two runs and a decent weekend so far, we should be good going into race day tomorrow. Like I’ve always said, anything can happen on race day but w’re planning to go some rounds tomorrow.”

To begin defense of her New England Nationals title, Force will race against an unfamiliar first round opponent for the third time in the last five races. This time it is Mike Salinas.

For the third race this season and second consecutive, Robert Hight will start eliminations from the No. 5 spot after a consistent two days of qualifying. Hight backed up his first time of the weekend, a 3.979 second pass at 324.44 mph from Friday late afternoon, with a 3.991-second run on Friday night. On Saturday, conditions were warmer but the two-time reigning world champion and his AAA Northern New England team put down two clean passes at 4.109-seconds during the third session and 4.075-seconds during the final session.

“We made another two good runs today. I knew we wouldn’t improve on what we ran yesterday, the conditions were just too different today but they’re similar to what we’ll see tomorrow. That’s what matters,” Hight said. “What Jimmy Prock and this AAA Northern New England team have done the last two days is encouraging. We’re right where we need to be for race day. It should be exciting.”

Hight will start the excitement of race day facing Bob Tasca III. Hight is 18-7 against Tasca, most recently defeating him in the semifinals at Chicago. Hight went on to win the race in Chicago for his first victory of the season.

Sixteen-time world champion John Force maintained his qualifying position right behind Hight in the No. 6 position. Force ran a 3.988-second pass at 324.44 mph during Friday’s second qualifying round, an improvement on his 4.021-second pass from the first round. On Saturday, Force smoked the tires mid track to run a 4.489-second pass in the early afternoon but came back in the final session to run a clean 4.141-second pass at 308.71 mph.

“Qualifying has been good. We’re going A to B, still learning, always learning, but we’re getting this PEAK Coolant and Motor Oil Chevy Camaro down the track. We wanted to keep this hot rod in the top half and that’s what Jon Schaffer and Ronnie Thompson and the rest of this team did,” Force said. “It’s all about winning rounds, moving up in the standings. In order to do that we have to be after a win, we want to win this race. We’ll get after it tomorrow.”

To get that win, Force will first have to defeat Jonnie Lindberg in the first round of eliminations, an opponent he is 2-1 against.

Courtney Force, the NHRA Mello Yello points leader, will enter race day in the No. 13 position, her most unflattering start in over a year. Up until this point in 2018, the Funny Car standout has qualified fourth or better with four wins from the No. 1 position. Though the 4.165-second pass at 304.46 mph from the final qualifying session is not where Force and her Advance Auto Parts team were hoping to start race day, the youngest of the Force sisters is taking it as a learning experience.

“Our Advance Auto Parts team struggled a little bit in qualifying this weekend,” Force said. “This isn’t where we wanted to go into race day but I think we’ve definitely learned some things throughout our four qualifying runs that will benefit us tomorrow. I think we learned a lot in qualifying and we’ll be ready to go tomorrow. It’s going to be a tough one but we’re ready for it and we’re excited.”

“We’ve got a tough first round match-up with Ron Capps but I think there’s no other person we’d rather face and we’re excited to take him on. We were able to take him out last year here to get to the finals.,” Force said. “He’s shown that he’s got a pretty consistent race car here but we’ll be ready to take him on.”