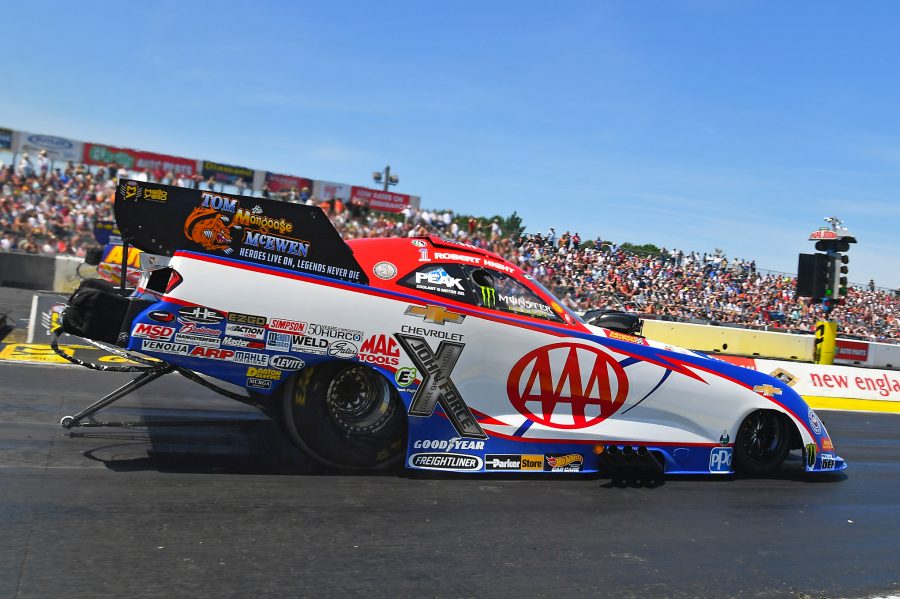 After a consistent qualifying effort, Hight, who ended up No. 5, faced Bob Tasca III in the first round of eliminations. Hight had to pedal his AAA Northern New England Camaro to the finish line after both he and Tasca started to have tire shake at about 330 feet. Hight, the two-time and reigning world champion, crossed the finish line first with a 4.463-second pass at 246.98 mph bettering Tasca’s 4.581 at 242.89.

In the second round, Hight lined up with 2016 world champion Ron Capps. Hight’s AAA Northern New England Chevy shook the tires right out of the gate. Capps had issues of his own with his chutes coming out down track but he had a 4.134-second pass at 276.41 while Hight coasted to a 7.226 at 98.83.

“We had a decent weekend. We qualified well and found a little consistency. We’re still trying to get the clutch right,” Hight said. “We’ve gone from the clutch not wearing at all to it wearing completely out, which is what happened to us in Saturday qualifying. It’s frustrating, but Jimmy Prock and Chris Cunningham are smart guys and they’ll figure it out. They’ve got an extra week to get this Auto Club Camaro ready for Denver and we usually do pretty well on top of the mountain.”

“We went a couple more rounds today and kept ourselves in the Top 10. We’ll be alright. (Crew chiefs) Jon Schaffer and Ronnie Thompson are getting a handle on things,” said Force who is eighth in the points standings. “We were solid in qualifying and we had top speed of the weekend so we know we’ve got a dog that’ll hunt. Looking forward to a week off and then hitting the western swing. These young guys are working hard; us old guys, too.”

Langdon was the 143rd different opponent Force has faced in his career. Significantly, Force now has raced at least one new opponent in 41 consecutive seasons.

In Top Fuel, reigning world champion Brittany Force was successful in taking out Mike Salinas in the first round of eliminations. It was a pedalfest as the ESPY nominated driver had a holeshot win, 4.186-seconds at 245.81 mph taking out a 4.182 pass at 214.93.

The quarterfinals gave Force and her Monster Energy team a close drag race against three-time world champion Antron Brown. Brown piloted his dragster to 3.923-second pass at 314.83 mph that was just enough to take the win away from Force and her 3.935 pass at 305.15.

“Overall, we had a good day. We struggled a little bit in qualifying getting the car down there. Came out on race day first round and had to pedal it but got the win light. Second round, we had an awesome run. It’s just that Antron (Brown) had us beat, he had a little bit better car,” Force explained. “But the Monster team, we’re happy. We went rounds on race day, which is an improvement from the last couple of weekends where we’ve been struggling that first round. So we’ll pack up and head to Denver.”

Courtney Force, who was the No. 1 qualifier and raced to the finals last year, struggled throughout the weekend, her Advance Auto Parts Chevy Camaro didn’t make it all the way down track during qualifying putting her in the No. 13 position, her lowest start in over a year. Force drove her Advance Auto Parts Chevrolet Camaro SS to a 4.489-second pass at 200.11 mph after it started to haze the tires mid-track resulting in a first-round loss to veteran Ron Capps. Despite the early exit, Force will leave the weekend with a 150-point lead.

“It was great to be back here at New England Dragway. We’ve won this race before and were in the final round last year here and were really hoping for a good weekend. Unfortunately, throughout qualifying our Advance Auto Parts team struggled to get the car down there. But we were hoping for some good luck in round one and I think we gave it all we got,” Force said. “I think we were on a solid pass until the tires came loose down track, and, unfortunately, we weren’t able to turn on the win light against Ron Capps. I feel like we did our best to give him a run for his money and I feel like we can learn something from that run and take it with us to the Western Swing. We’ll have a weekend off, fix our focus and get after it in the Western Swing to get back on track.”

John Force Racing will continue racing in the NHRA Mello Yello Drag Racing Series with the Dodge Mile-High NHRA Nationals in Denver July 20-22, the first of three races in a row on the west coast dubbed the Western Swing.